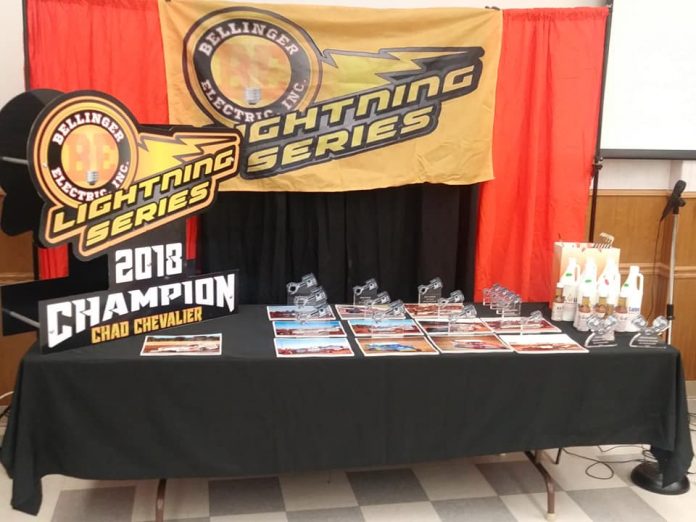 RANSOMVILLE, NY – The Bellinger Electric Inc (BEI) Lightning Series for Sportsman Modifieds celebrated the 2018 season and announced plans for the 2019 season at their awards party on Saturday evening at the Ransomville Fire Hall. BEI Lightning Series Announcer Steven Petty served as the master of ceremonies.

Zach George and Trevor Wright were named co-rookies of the year. The BEI Lightning Series gave a farewell to Cody McPherson who announced at the end of 2018 that he was stepping away to spend more time with his family. McPherson’s career includes multiple championships at both Merrittville and Humberstone, a co-track title at Ransomville, and a Mr. DIRT Championship.

Throughout the night, attendees had the chance to race on an RC track. Special drawings took place for those in attendance as well. Ivan Robitaille won a Hoosier tire that came from Lou Blaney’s Big Block Modified. Scott George won the 2019 pit pass for the entire BEI Series and Roger Brown won the 2019 Grandstand pass good for all 2019 BEI Lightning Series events.

The 2019 season for the BEI Lightning Series begins on Sunday, June 2 at the New Humberstone Speedway in Port Colborne, Ontario. Race two will take place on Friday, June 7 at Freedom Motorsports Park in Delevan, NY. Race three will be on Thursday, July 4 at the Genesee Speedway in Batavia, NY. Race four will be on Monday, August 5 at the Merrittville Speedway in Thorold, Ontario alongside the Super DIRTcar Series. The series finale will take place on Friday, September 13 at the Ransomville Speedway for the Sean Letts Memorial.

The series will have a presence at the annual Motorsports Expo, set for March 9-10 at the New York State Fairgrounds in Syracuse. Look for upcoming releases regarding sponsors and series news.