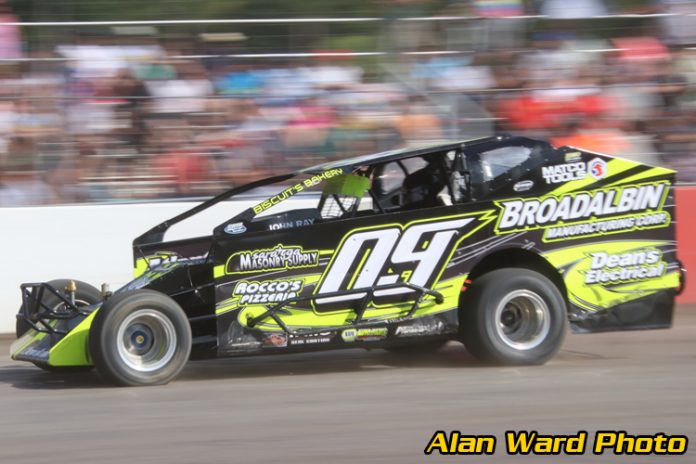 WEST HAVEN, VT – The old Pepsi commercials had that familiar tagline – “New look, same great taste,” – and the slogan now rings true at Devil’s Bowl Speedway. Pepsi has entered into a new two-year agreement to be the title sponsor of the headline Sportsman Modified division at the historic Vermont dirt track and to be the “Official Soft Drink of Devil’s Bowl Speedway” for 2019 and 2020.

Under their new name as the “Pepsi Sportsman Modifieds,” the open-wheel, crate-engine stock cars are poised to continue their climb as the top weekly racing attraction in New England. Devil’s Bowl’s 2018 season average of 27 cars per race was the largest car count of any weekly headline division at any dirt or paved track in the six-state New England region, and it appears that things are headed in the same direction for the coming summer.

The 2019 Pepsi Sportsman Modified division already has some big names signed up, with many more expected including rising star Connor Cleveland. The 23-year-old from Corinth, N.Y. is a former King of Dirt Racing (KOD) Crate Modified Series and Airborne Park Speedway champion with many wins at the iconic Albany-Saratoga, Oswego, and Weedsport speedways. Cleveland made three Devil’s Bowl starts in 2018, with a top-five finish against the KOD tour and a top-10 in the Interstate All Battery Center Vermont 200.

Also geared up for the new year is Modified great Hector Stratton of Bennington, Vt., who has announced a full-time return to Devil’s Bowl. A veteran of 40 years of racing and showing no signs of slowing down, Stratton won 31 times at Devil’s Bowl from 1984-98. Other drivers appearing on the early entry list are perpetual title contender Tim LaDuc, 2018 Rookie of the Year Marty Kelly III, and veterans Brian Whittemore and Walt Hammond Jr.

Devil’s Bowl Speedway opens the 2019 season on Sunday night, May 19. The summer schedule is packed with major events for the Pepsi Sportsman Modifieds including the $12,000-to-win Vermont 200 on Labor Day weekend, September 1. Also on the schedule are King of Dirt Series events on May 26 and August 11, special 100-lap races on July 3 and July 28, and extra-distance races of 50 laps or longer on June 9 and September 15.


Competitor registration forms and membership licenses are available at discount prices now through March 31, and season passes for both general admission grandstand seating and the pit area are also on sale.