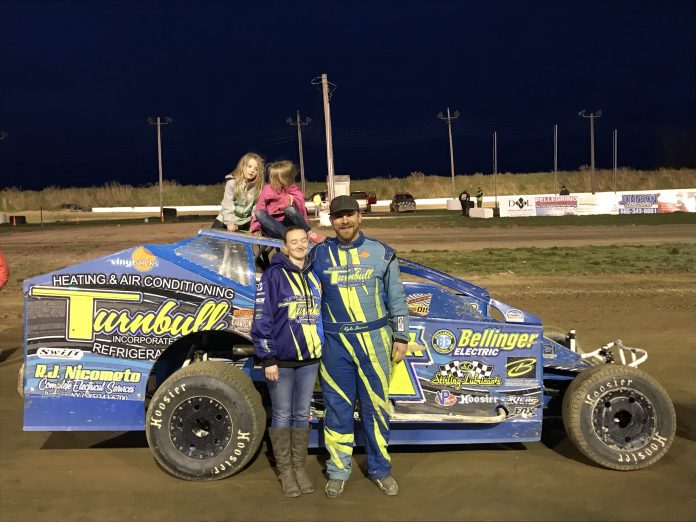 BATAVIA, NY – JJ Mazur and Kyle Inman each won division championships in 2018 despite scoring limited regular season wins and were disappointed with their finishes of 9th and 10th, respectively on opening night. They were able to make up for it on Saturday Night though as they each went to Victory Lane.

Mazur, of Batavia, led all 25 laps of the late model feature to equal his 2018 win total. Mazur started on the pole but throughout the race had to fend off a hungry Jimmy Johnson.

“Starting up front definitely helps but this is our second year with this car and we really are getting it figured out,” said Mazur in Victory Lane. “Normally the top is so good here but I saw Jimmy (Johnson) peaking underneath me in turns 1 and 2 and the bottom was really good over there. Once I moved down there we were in pretty good shape.”

The race ran caution-free until lap 13, just past halfway. On the ensuring restart, Johnson took a look to the bottom of Mazur but a series of cautions after that restart would keep slowing the field down and halting any challenges Johnson had, who would have to settle for second. Doug Ricotta would have a strong third place showing, holding off David Pangrazio. Dave DuBois completed the top five.

The first feature of the night was turned in by the Sportsman who saw Kyle Inman capture his first win of the year but his third in the last four races dating back to last season.

Inman, of Darien, had a wild battle with AJ Custodi for the lead in the opening laps. Inman looked to move by Custodi on lap three when the duo came upon a lapped car and had to fall back in line. On lap seven Inman would take the lead, only to open up the door two laps leader when he slid up the track. Custodi made a bonsai attempt for the lead but would catch water on the bottom of turn three and spin around, dropping him outside the top five. From that point on Inman was untouchable as he would capture the win over Austin Susice, Jim Harbison, Dave Conant and Custodi, who would drive back up to round out the top five.

Kurt Stebbins and Dennis Cummings were the two drivers to pull double-duty on the night, driving first in their late models and then returning to the track with potent street stocks, as they used their track time to battle it out for the win. Cummings led throughout the feature but with under 5 laps left to go Stebbins began to reel in his teammate and sponsor. Coming to two laps to go, Stebbins dove hard to the bottom of turn three and his car not only stuck, but allowed him to drive off the corner and snatch the lead away and run off to the victory. Cummings would settle for second with a smile on his face after a good race while Bill Taylor fended off week 1 winner Josh Pangrazio for third. Doug Jones completed the top five.

Eric Weis was another driver to equal his win total from 2018 in week two, as he fended off his bad luck from the first night to dominate the 15-lap Mini Stock Feature. The Batavia resident led from start-to-finish with a car that he termed as flawless with the ability to go anywhere he needed to on the racetrack. As Weis drove away to a commanding victory, an epic battle was on for second with Rich Conte surpassing Bill Weller Jr. late in the race for the spot. Ray Hyer rebounded from an early incident to rise up to fourth while Cole Susice rounded out the top five.

Perhaps the wackiest race of the night was turned in by the bandits with six lead changes in 12 laps. On the final circuit, Evan Farriggiu was leading but got spun around by Alexis Traxler as the two came together off of turn two. The field would come back to a yellow and checkered flag and with Traxler being sent to the tail for her involvement in the spin the win was given to Brian Gregory for his first career win. Gregory said after the race that he was surprised and never thought he would be declared the winner. Greenley George would rebound from her own roller coaster of a race to finish in second ahead of Hailey Weis who completed the podium.

To end the night, the rain-delayed Spring Fling Enduro 100-lap event was contested with an amazing 70 cars battling on a slick track. A myriad of drivers had their crack at the lead, but it was Brad Shepard who took the top spot just after halfway and then took off until his buddy Ryan Allen ran him down and captured the top spot. Allen’s reign in front of the field was short-lived though as Shepard got right back by and ran off to the big win. Brian White charged late to finish second while Andrew Akreamer was third.