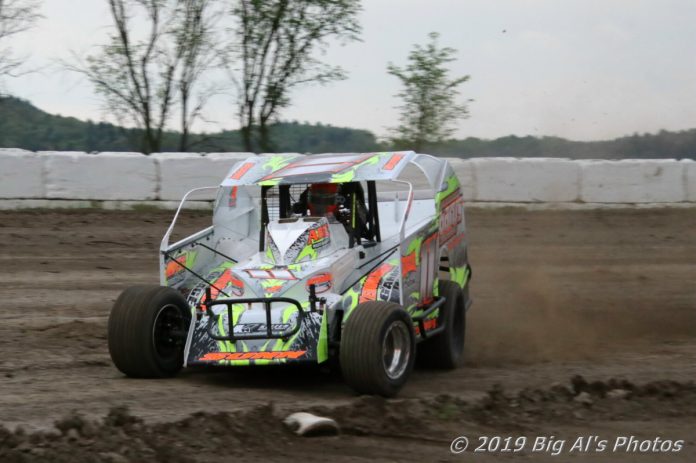 WEST HAVEN, VT – The King of Dirt Racing (KOD) Crate Modified Series is ready to go. The KOD tour opens its fifth season on Sunday at Devil’s Bowl Speedway, as A-Verdi Storage & Office Solutions presents the “Memorial Day Kickoff 50” as part of a huge holiday event at the Vermont track.

Connor Cleveland and Josh Sunn appear to be the men to beat at the A-Verdi Memorial Day Kickoff 50. Two-time and defending KOD champion Cleveland already has three wins in weekly local track competition in New York State. Sunn won the KOD Memorial Day event at Devil’s Bowl last year in a shocking upset over nine-time track champion Kenny Tremont Jr., and he was a runaway winner in his qualifying heat at the track’s season opener last weekend before rain postponed the feature race.

Cleveland, Sunn, and Tremont will all be in attendance on Sunday, and they’ll have plenty of competition. Drivers from Devil’s Bowl and several other tracks in Vermont, New York, New Hampshire, and New Jersey have expressed interest in the event.

Racing on Sunday begins at 6:00 p.m. and includes the Sprint Cars of New England tour and Devil’s Bowl’s weekly Limited Sportsman, Super Stock, Mini Stock, and 500cc Mini Sprint divisions. General admission is $18 for adults, $15 for seniors (62+), and free for kids age 12 and under. In case of rain on Sunday, the entire event will be moved to Monday, May 27 at 6:00 p.m.

The King of Dirt Racing Series has announced that it will return to a more familiar championship points format in 2019, as the previously announced “Contenders Series” has been dropped. A traditional season-long structure will crown the KOD champion based on points earned at all events, and the champion will earn $2,500.

The schedule is currently three big-money events: Devil’s Bowl Speedway hosts the KOD Crate Modifieds on May 26 and August 11, and the Northeast Crate Nationals are at Fonda (N.Y.) Speedway on September 14; negotiations for additional events continue, but official agreements have not yet been made at the present time.

The King of Dirt Racing Series is online at www.KingofDirtRacing.com and can also be found via social media on Facebook, Twitter, Instagram, and YouTube. For more information, call Mike Bruno at (802) 236-9141. For sponsorship opportunities, contact KOD Media/Marketing Director Justin St. Louis at (802) 355-3282, or email kodracingseries@gmail.com.