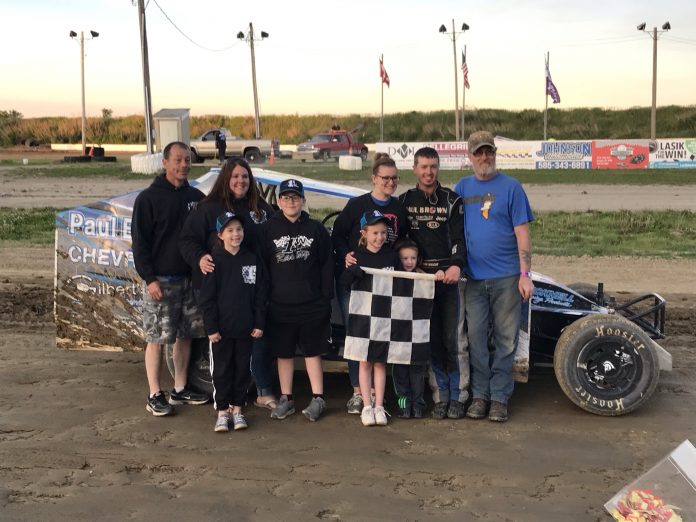 BATAVIA, NY – Doug Ricotta won the first two Crate Late Model Features ever contested at Genesee Speedway back in 2016 and since then has been a mainstay in the division; but it was not until Saturday Night when he was able to capture his third win.

Ricotta, of Perry, led all 25 laps of the caution-free Late Model feature to return to Victory Lane in Batavia. On a perfect night for racing with track conditions slick and technically, the show moved along quickly, with Ricotta crossing the line at 9:38 to end racing action. After the race he could not say enough about the effort his crew had made to get him back to the hallowed ground.

“It has taken a lot of work to get this car right to the point where we can be competitive,” said the veteran in Victory Lane. “This car worked well even right through the black.”

Ricotta jumped out to a healthy advantage early in the race while Jimmy Johnson trailed a few seconds back. As the race entered the second half though, Johnson began to reel in the No. 01 and got within a few car lengths in the final laps while amongst lapped cars. As the duo was coming to the white flag Johnson’s car slowed suddenly and he ducked in to the pits, leaving Ricotta clear to coast to the victory.


With Johnson exiting a lap early with an apparent engine failure, David Pangrazio was able to drive from fourth to second on the final lap, passing Jon Rivers, who remained third. Bill Holmes and JJ Mazur rounded out the top five.

Josh Wilcox became the newest Sportsman Driver to finally breakthrough into Victory Lane at Genesee Speedway, leading wire-to-wire to become the fourth different winners in as many races this season.

Wilcox, of Franklinville, held off the late challenges of defending champion and point leader Kyle Inman in a four-lap sprint to the finish. Early in the race, Wilcox commanded a healthy advantage but around lap eight he said he lost power steering and had to muscle his No. 1w to stay in front.

“I had to work hard for that one (with the power steering not working),” declared Wilcox in Victory Lane. “The 18w (Harbison) got that run on me on the restart so I tried to push him up a little higher on the next one and he still got a good run but there wasn’t much bite up there.”

After the event’s first caution flag on lap 12 Jim Harbison tried to make a power move to the outside of turn one on the restart but a caution would negate the attempt. On the ensuing restart, Wilcox moved his car up the track a little higher to crowd the No. 18w and was able to hold him off as the duo exited turn two.

On the lap 13 restart, Inman was able to move from 5th to 3rd, after another restart he waited to pounce on Harbison for second and capitalized on lap 17 when the second place car slipped up off of turn four. Inman tried to pounce in the closing laps with a high-side effort but would have to settle for second. Harbison would claim third with Cam Tuttle running up to fourth. The battle for fifth was intense under five laps to go when Tony Pangrazio, Byron Dewitt and Austin Susice all collided off of turn two, resulting in Dewitt’s and Susice’s rides flipping wildly. All were ok. Dave Conant would be the beneficiary to rally from an early-race incident to capture fifth.

Josh Pangrazio won the first and third Street Stock features of the year, and on Saturday won the fifth as he dominated the 20-lap event. Pangrazio, of Elba, made the pass for the lead on a lap three restart to get by Doug Jones and then glued his No. 7 to the bottom of the slick surface to command the field all the way to the finish. In 2018, Pangrazio was always most dominant on a slick track and was excited for the opportunity on Saturday, as he backed up his corners and hit his marks to build on his point lead. Doug Jones would settle in second while John Zimmerman crossed in third. Tom Baker and Jesse Qutermous would complete the top five.

A fast Mini Stock feature saw Brandon Shepard capture his second win of the season. Shepard was hounded all race by Cole Susice and Ray Hyer as the lead trio sliced through a myriad of lapped cars while the race rushed along under green flag conditions for the opening 11 laps. In the final four circuits, Susice would jump in to second to chase Shepard but would not be able to get on by. Ray Hyer would move back in to second at the finish but did not make weight at the scales, handing the runner-up position back over to Susice. Chris Leone, Ashley Blech and Rich Conte completed the top five.

The Bandit feature once again did not disappoint with excitement. On the final lap, Tyler Guzzardi made a last-ditch effort to get by Greenley George for the lead but the contact forced both to spin, opening up the door for Randy Gregory to drive on by and capture his first career victory in shocking fashion. Gregory was involved in two incidents earlier in the race, including one with two laps remaining with his brother, Brian. Brian had won two races ago and Randy made sure to equal his brother and was surprised he did it so quickly. Brian would cross in second while George would be scored in third.

The Modifieds will return to the Genesee Speedway this Thursday as Wraptile Graphics and Professional Drainage Systems present “The Gladiator”. Also on the card will be the GRIT Sportsman Series, Street Stocks, Mini Stocks and a Bandit Feature. Hot laps will be at 6:30 with racing going green at 7:00 p.m. For more information visit www.Genesee-Speedway.com.