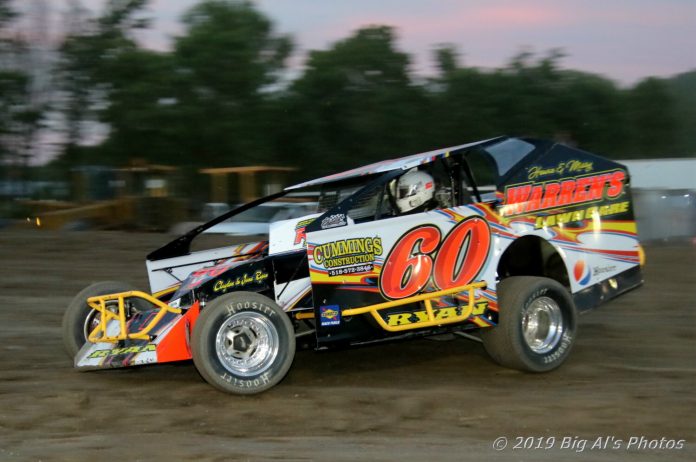 WEST HAVEN, Vt. – Jimmy Ryan is from the old-school pack of established veteran stock car drivers at Devil’s Bowl Speedway, and he showed the kids how to get the job done on Sunday, June 9. The Shoreham, Vt., racer made all the right moves for a popular win on Mike’s Fuels Night in the Pepsi Sportsman Modified division, headlining a card that also saw Matt Bilodeau, Chris Murray, P.J. Bleau, Cody O’Brien, and Ryan Keays visit Victory Lane.

“Flyin’ Ryan” has often served as a mentor for younger competitors over the years, and he battled with one of his unofficial students – Middlebury, Vt.’s Justin Comes – in a thrilling battle for the win. Ryan was on the hunt all night, but he really poured it on in the final 10 circuits of the 30-lap race.

Polesitter Frank Hoard III led the opening 14 laps before Comes took command, but the race truly became memorable when Ryan and former track champions Bobby Hackel and Kenny Tremont Jr. all arrived. Comes dueled with Ryan at the front to the delight of the fans, and the excitement was ratcheted up even further with two late restarts that saw the pair swap lanes and the lead multiple times.

Ryan grabbed the 15th win of his Devil’s Bowl career with Comes a close second; Comes gave Ryan a big thumbs-up as he drove past Victory Lane. Hackel, Tremont, and Hoard completed the top five in order, with Billy Lussier, rookie Travis Billington, Walter J. Hammond, Mike Fisher, and Allan Hammond in tow. Even sweeter for Ryan was the fact that he was in his first race in a new sponsorship deal with event sponsor Mike’s Fuels.

Brandon, Vt.’s Matt Bilodeau was a first-time winner in the O’Reilly Auto Parts Limited Sportsman division, taking a hard-fought 20-lap feature. Bilodeau stalked leader Marty Hutchins for the first half of the race before making his move, then held off Johnny Bruno, Hutchins, and others as he streaked to his maiden victory.


Bruno was the runner-up for the second time in as many races, with Hutchins third ahead of James Hanson and Austin Chaves. Adam Piper Austin Comes, Shawn Phelps, Anthony Ryan, and David Boisclair took spots 6-10.

Two-time defending Super Stock champion Chris Murray scored in his first win of the season in a 20-lap runaway. The Fair Haven, Vt., driver took the lead from Scott FitzGerald at the halfway mark and built a big lead but had a brief scare with three laps remaining when he bumped the ignition kill switch and shut his engine off. Murray was able to quickly re-fire the car and never lost the lead.

Garrett Given crossed the finish line in second and FitzGerald nipped Bill Duprey for third. Joey Trudeau came back from a trip off the backstretch for fifth place. Kevin Elliott was sixth, followed by Andrew FitzGerald rookie Cam Gadue, Merv Blackwell, and Josh Bussino. The results of the Super Stock feature are considered unofficial pending a review of technical inspection.

P.J. Bleau scored an emotional victory in the 15-lap feature for the Mini Stock division. The Latham, N.Y., driver overcame an off-season bout with lung cancer, and with a clean bill of health has a full schedule for 2019.

Bleau’s battle up front with Shawn Moquin was very close for most of the race before he pulled away for the win. Bleau received a loud ovation from the crowd and a long embrace from his father, Patrick, in victory lane. Mike Preston was third behind Moquin, with Craig Kirby fourth and Jake Barrows fifth. The top 10 was completed in order by Shawn Rogers, Tim Simonds, Lynn Denton, and rookies Cody Groesbeck and T.J. Knight.

Cody O’Brien of Springfield, Vt., took his first win of the season in the Friend Construction 500cc Mini Sprint division. The defending champion mixed it up with top runners Samantha Mulready, Joel Belanger, and twin brothers John and Shawn McPhee early in the race, and he was out front when the race was stopped with 8 of 15 laps complete due to time constraints.

Street-Legal Spectator Races closed out the night with fans racing their daily drivers in one-on-one match races. Ryan Keays of Greenwich, N.Y., came out on top with his 1999 Honda Civic to win the final round.

Devil’s Bowl Speedway is back in action on Sunday, June 16, at 7:00 p.m., with the 14th annual Heritage Family Credit Union “Member Night” featuring free general admission for all who present a valid HFCU debit or credit card, checkbook, or bank statement at the ticket window. All five weekly divisions will be in action at the event, which is also the annual Father’s Day “Topless” special; Sportsman Modified and Limited Sportsman cars will race without roofs and Mini Sprints will go wingless. General admission for non-HFCU members is $12 for adults, $10 for seniors (62+), and free for kids 12 and under.

Did Not Start: Kyle Hoard

Did Not Return From 5/19 Rainout: Jason Baker, Brett Hackel

Did Not Return From 5/19 Rainout: Paul Braymer, # Roo Forrest

Did Not Start: Joe Baker

Did Not Start: Terry Balla

Did Not Return From 5/19 Rainout: # Jack Koponen