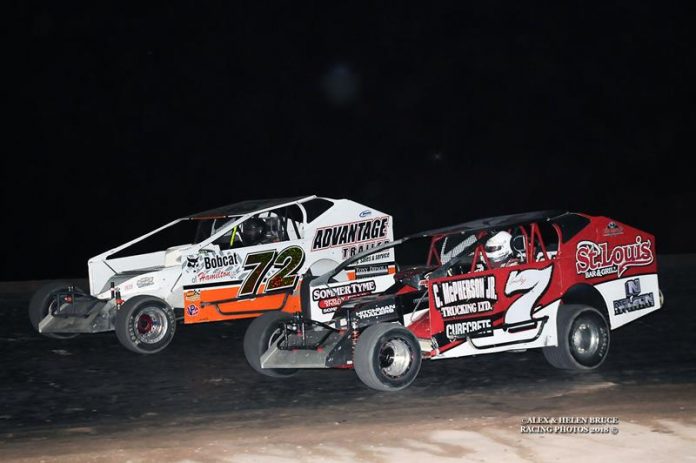 The Bellinger Electric Inc (BEI) Lightning Series hosted race number two of their 2019 campaign at the New Humberstone Speedway with Cody McPherson and Emily Puchalski on the front row for the main event with Puchalski getting the early race advantage. After multiple cautions plagued the first portion of the feature event, Justin Sharp would take the lead with Dylan Davidson battling for the top spot. The duo would battle for a couple of laps until Davidson spun in turn two. The ensuing restart would see McPherson be able to regain the lead. McPherson would pull away from James Michael Friesen and Justin Sharp throughout the second half of the race, but lap traffic would be a factor. With the leader starting to hit lap traffic late in the 30-lap contest, Friesen and Sharp were able to reel in McPherson and Friesen would come within inches of McPherson but it was the 2018 track champion Cody McPherson edging out Friesen to score the win. $1,250 went to the winner of the 30-lap contest.  The next race for the BEI Lightning Series will be on Thursday, July 4 at Genesee Speedway in Batavia, NY for the 50-lap Tim Downs Memorial.

Colton Ledingham and Sam Pennacchio shared the front row for the Pro Fabrication RUSH Late Models had their second home race as part of the Northeast Late Model Alliance with Pennacchio showing the way. Off an early race restart, Rob Pietz would take second away from Chad Homan with Homan regaining the position just a couple of laps later. Ledingham would take third away from Pietz on lap 10 as Adam Ferri was challenging Pietz for fourth. Homan used lap traffic to take the lead away on lap 13. Homan spun in turn three to bring out the caution on lap 14. Pennacchio would take the lead back and would go on to score the win.


JC Auto Thunderstocks had their second home race for the Insta Panels Duel on the Dirt saw Pete Reid jump to the early race lead and was being pressured by Jim Lampman. Son Donny Lampman worked into the top three as Dave Bailey started to battle with the lead trio. The lead would exchange hands with Reid and Jim Lampman until Reid got the lead for good on lap six. Donny Lampman took the lead from Pete Reid with five laps remaining and would go on to score the win after an intense battle with Reid and Bailey.

Home race number two for the Insta Panels Duel on the Dirt for the Glo & Go Tanning Mini Stocks saw Vincent Pagnotta and Dave Hoyle on the front row with Hoyle taking the lead as Cole Hardy and Evan Curtis raced in positions three and four. The red flag would come out on lap two as Chris Laskey spun, in turn, three with Kenny Hair colliding into Laskey. Laskey climbed out of his car under his own power. On the restart, Evan Curtis would go three wide with Hoyle and Pagnotta to take the lead. Curtis had challenges from Tyler and Olivier. Evan Curtis would hold off all challenges over the last half of the race to score the win, his first of the season.

Dylan Llord and Justin Towers brought the Airhardt Deliveries Pro 4 Trucks to the green flag for their 15-lap feature with Llord showing the way over Towers and Mitch Dumont. Dumont would take over second early and would go after race leader Llord.

NEWS AND NOTES:  90 cars signed in pitside for the racing activities. Fans were treated on Fan Appreciation Night with $10 admission and the popular Autograph Session during intermission.

Canada Day weekend presents the annual $1000 to win Showdown night. The Race of Champions Dirt 602 Sportsman Series plus the combined races for the Northeast Late Model Alliance and the Insta Panels Duel on the Dirt for the Thunderstocks and Mini Stocks plus Pro 4 Trucks and Fireworks! Gates will swing open at 4 pm and showtime is at 6:30 pm. All kids in attendance can check out the activities with the Humbee’s Kids Club presented by the Port Colborne Dairy Queen happening at 5:00 pm each race night.