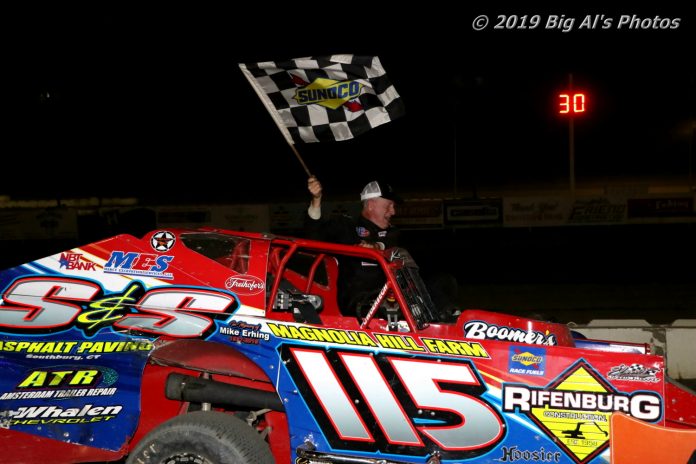 Hundreds of fans in the large crowd enjoyed free admission as a benefit of their Heritage Family Credit Union membership, and they thrilled to the sight of Tremont’s drive through traffic in the 30-lap Pepsi Sportsman Modified feature. Known primarily as an inside-lane specialist, Tremont used the bottom, middle, and top grooves to slice through the field from his 16th starting position on the 29-car field.

Mike Palmer paced the field from the pole position as part of a trio of impressive underdogs with sophomore drivers Jeff Washburn and Bruce Loomis in tow. Tremont made his move on the outside of Palmer to take command at lap 14 and never looked back. Meanwhile, Adam Pierson came from 19th starting position and Hector Stratton drove from 11th to get past Palmer late in the race. A caution period with four laps to go bunched the field together, but Tremont never faced a serious challenge and drove off for the win.

Pierson finished second ahead of Stratton and Palmer, while Justin Comes had an incredible drive from 28th to finish fifth. Washburn capped his great night in sixth place, with Vince Quenneville a season-best seventh. Billy Lussier took his third top-10 finish in as many races in eighth place. Recent high school graduate Tanner Siemons finished ninth for his first top-10 of the year, and Jimmy Ryan came from 26th to finish 10th.

Seventeen-year-old David Boisclair copped his first-ever Devil’s Bowl win in the 20-lap topless feature for the O’Reilly Auto Parts Limited Sportsman division. The Watervliet, N.Y., racer had been one of the fastest drivers in the first two races of the season but was bitten by bad luck both times, and he very nearly had it happen again in the midst of a torrid battle for the lead with Anthony Warren; after trading the lead several times per lap for several circuits, Warren’s left-front tire hopped over Boisclair’s right-rear and Warren catapulted of the track.


Boisclair was able to come away unscathed and snatched his first win at the Vermont track. Adam Piper overcame some early-season gremlins for a strong runner-up finish. Matt Bilodeau came from 12th at the start to finish third, followed by James Hanson and Marty Hutchins. The top 10 was completed in order by Jesse Durkee, Mike Parodi, Mike Ryan, Anthony Ryan, and Dave Snow.

Scott FitzGerald was just as much lucky as he was good in the 20-lap Super Stock feature. The West Rutland, Vt., veteran was involved in a multi-car crash early the race but rebounded to run strong in second place. When leader Chris Murray blew a clutch with six laps remaining and was forced to retire from the race, though, FitzGerald inherited the lead and drove away for his first win of the year.

Kevin Elliott and Andrew FitzGerald – the winner’s son – both recovered from the same crash to officially take second and third place finishes, respectively. Rookie Cam Gadue scored his best finish in fourth. Garrett Given was officially scored in fifth place; Given was the second car across the finish line but was penalized three positions for failing to comply with an official directive during a restart earlier in the race.

Middlebury, Vt.’s Jake Barrows was a happy first-time winner in the Mini Stock division. The third-year racer took the point from Mike Preston three laps into the 20-lap race and left everyone behind with a convincing run. Shawn Moquin finished second ahead of Craig Kirby. Connor Bryan was a fist-pumping fourth in his first race ever, and rookie T.J. Knight scored his best finish in fifth.

Thirteen-year-old rookie Evan Roberts was a first-time winner in the Friend Construction 500cc Mini Sprint division. The fourth-generation racer from Fletcher, Vt., ran a smooth line in a rough-and-tumble “wingless” race and was able to get away from a full-contact body slam at lap 10 to keep control of his car.

A 15-minute time limit was enforced due to excessive crashes and caution periods, and the race was cut short from 15 laps to 10; Roberts was in the lead at the time and is credited with the victory. Another youngster, 12-year-old Joel Belanger continued his strong start to the season with a career-best runner-up finish. Samantha Mulready was equally fast and finished third ahead of Kevin Smith and Dakota Green.

Devil’s Bowl Speedway is back in action on Sunday, June 30, at 7:00 p.m., as Durkee Insurance Agency and FairHavenMotors.com present the “Vintage Racing Celebration” event featuring the 54-lap Charlie LaDuc Memorial Sportsman Modified race and the Champlain Valley Vintage Dirt Modified Series. All five weekly divisions will be in action at the event. General admission is $12 for adults, $10 for seniors (62+), and free for kids 12 and under.

The speedway is also gearing up for the biggest and loudest Independence Day celebration in southern Vermont on Wednesday, July 3 at 6:00 p.m. A massive fireworks show will highlight the event, which includes a 100-lap Sportsman Modifieds race, the Sprint Cars of New England tour, the Enduro Series, and weekly divisions.

Did Not Start: # Kaleb Shepard

Did Not Start: Jack Koponen