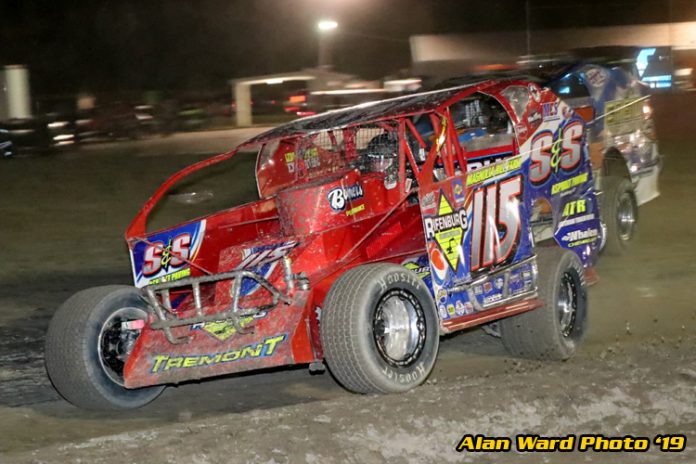 WEST HAVEN, VT – Kenny Tremont Jr. played the waiting game in the Charlie LaDuc Memorial 54 at Devil’s Bowl Speedway on Sunday, June 30, but when it came time to go, he went. The nine-time track champion was in 13th place at lap 29, but he turned up the wick and was in the lead just seven circuits later. Tremont’s victory highlighted the Durkee Insurance Agency “Vintage Racing Celebration” event presented by FairHavenMotors.com.

West Sand Lake, N.Y., racer Tremont started 19th on the 27-car Pepsi Sportsman Modified grid and was patient in heavy traffic on a racy surface. Alex Bell dominated the first half of the race and was headed for a runaway, but several caution periods hit just past the midway point and the race changed dramatically. Just as Bobby Hackel took the lead from Bell at lap 30, Tremont hit the afterburners and began his quick march to the front.

After being stuck outside the top 10 all race, Tremont sliced through the pack three-wide more than once and reached the lead by lap 36 – he was in 13th place just seven laps earlier. As Tremont went along, the cars of Justin Comes, Adam Pierson, Frank Hoard III, and Tanner Siemons also came to life. Hackel dropped out with steering problems shortly after Tremont took over.

A scary wreck with five laps remaining drew the red flag as Walter Hammond lost a wheel and collected the cars of Mike Fisher, Travis Billington, and Wayne Stearns; none of the drivers were injured. That restart put Tremont and Comes on the front row, but Tremont was never seriously challenged and drove to his third-straight win in the annual race honoring the memory of longtime driver Charlie LaDuc.

Pierson made a late move to steal the runner-up finish from Comes, marking the second week in a row for a Tremont-Pierson 1-2 finish. Siemons blasted from 11th in the final 10 laps to finish fourth, and Hoard rounded out the top five. Brian Whittemore – who ran second to Bell in the first half – finished sixth, followed by John St. Germain, Walt Hammond Jr., Mike Palmer, and rookie Brent Warren.


Mike Parodi of South Glens Falls, N.Y., extended the streak of first-time winners in the O’Reilly Auto Parts Limited Sportsman division to four, with an exciting drive in that division’s 20-lap feature. Parodi’s money was made on the restarts, and he was able to successfully pass leader Anthony Warren after a restart with six laps left. From there, he ran a smooth line to take his first Devil’s Bowl victory and first in a Modified.

Warren shrugged off a tough start to the season with a runner-up finish after leading the first 14 laps. James Hanson took third with former asphalt racer Dave Snow fourth and Adam Piper fifth. Mike Ryan was sixth ahead of Austin Comes, Marty Hutchins, Mike McGinn, and Shawn Phelps. David Boisclair – who won the previous week – was uninjured in a wild three-time flip that sent his car bouncing high in the air.

Josh Bussino of Belmont, Vt., landed in the winner’s circle for the first time in two years after the 20-lap Super Stock feature. “The Bulldog” had an entertaining run with leader Mark Norris, but Norris slowed after the halfway point, allowing Bussino to scoot away with a comfortable lead. Scott FitzGerald came from deep in the field to finish second, with Garrett Given, Kevin Elliot, and Andrew FitzGerald in tow.

Shawn Moquin of Milton, Vt., continued his hot start in the Mini Stock division’s 20-lapper. Moquin flew from 10th at the start to take the lead just four laps into the race, and he had an easy go after that; Moquin now has two wins and two runner-up finishes in four starts.

Mike Preston edged Jake Barrows in a close finish for second place, but his car was disqualified in post-race inspection for a weight violation. Barrows was moved up to second, followed by Craig Kirby, Kyle Watrous, and rookie Katrina Bean.

Shawn McPhee of Rutland, Vt., became the first repeat winner in the Friend Construction 500cc Mini Sprint division’s 20-lap race. Rookie Jack Koponen led the first nine laps before Cody O’Brien took over, but McPhee grabbed the lead on a lap 12 restart and cruised to the win in a well-driven race. Samantha Mulready finished second while Koponen held on for third. Kevin Smith and Evan Roberts completed the top five.

The Champlain Valley Vintage Dirt Modifieds made their maiden voyage to Devil’s Bowl with an entertaining 15-lap race for both Modified and Sportsman cars. Driving his own original 1980s-era, Gremlin-bodied No. 77J car, John Flach of Ravena, N.Y., completed a decisive pass of Rob Sanford with four laps left to take the overall victory and the Modified division win. Sanford, in a Jeff Hoetzler tribute car, finished second, and Kevin Perry of nearby Hampton, N.Y., finished third to take the Sportsman win. Merv Blackwell and Tyler Maxham completed the top five.

Devil’s Bowl Speedway has a huge event planned for Wednesday, July 3 at 6:00 p.m., with a 100-lap Sportsman Modified race, the Sprint Cars of New England tour, the Enduro Series, weekly divisions, the annual kids’ bicycle giveaway at intermission, and a massive fireworks display by Noise “R” Use Fireworks. General admission is $20 for adults, $18 for seniors (62+), and free for kids 12 and under.