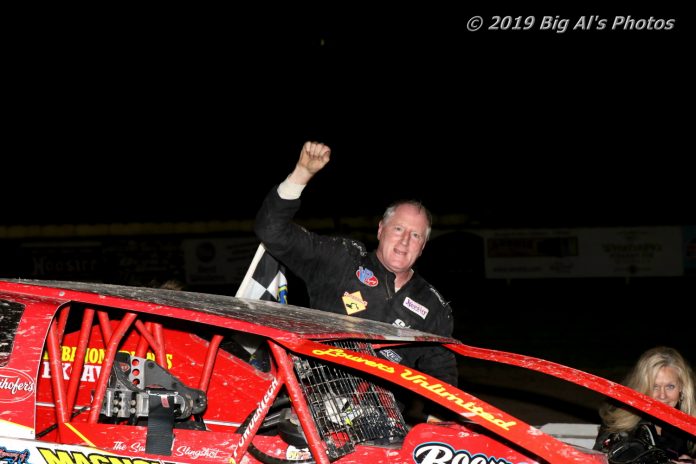 WEST HAVEN, VT – Kenny Tremont Jr. has long been the leader in all-time victories and championships at Devil’s Bowl Speedway, and his victory on Wednesday, July 3, was a memorable won with some personal milestones attached to it. Tremont thrilled a massive grandstand crowd at the Bruno’s Towing Independence Day Spectacular presented by Noise “R” Us Fireworks, and he was joined through the night in Victory Lane by Will Hull, Johnny Bruno, Scott FitzGerald, Shawn Moquin, Evan Roberts, and Chris Sumner.

Tremont dominated the second half of the 100-lap main event for the Pepsi Sportsman Modified division to take his third consecutive win at Devil’s Bowl and the 85th of his career at the track. The win was the 375th overall victory of his 40-year career.

“We’ve been doing this a long time, and I’ve got a great team and we’re still running well,” Tremont said. The West Sand Lake, N.Y., driver has set a goal of achieving 100 wins at the Vermont track before he retires. “If the breaks keep coming our way, I’d really like to get to 100 wins here at Devil’s Bowl.”

Cambridge, N.Y.’s Alex Bell continued a recent run of improvement and led the first 50 laps of the race before Tremont completed his march from 18th starting position. Bell engaged in a side-by-side fight for the runner-up spot with Adam Pierson from that moment on, and the pair ran wheel-to-wheel for the balance of the race in an incredibly entertaining see-saw battle without contact. Pierson, of East Corinth, Vt., edged Bell for second place at the finish.

Bobby Hackel recovered from an early spin to crack the top-five near the end of the race and ended up in fourth. Frank Hoard III grabbed fifth ahead of Jeff Washburn, with Tanner Siemons, Cody Ochs, Allan Hammond, and Justin Comes completing the top 10 finishers in order.


Plainfield, Vt.’s Will Hull won the 25-lap feature for the Sprint Cars of New England after a thrilling final five laps. Hull started on the pole but fell back to third place early in the running behind Floyd Billington and Peter Dance. Hull took half of the race to figure out his car’s handling on the dry slick track, but clawed his way back past Dance and reached leader Billington in the stretch drive.

Hull made a move on the outside with five laps left, but contact with Billington sent him off the backstretch at full speed. Hull never lifted off the throttle and drove back onto the track, then chased Billington down and made a pass on the outside coming out of Turn 4 with one lap left. He drove away in the final circuit as Billington settled for second. Former series champion Dan Douville came from 10th starting position to finish third, and Clay Dow beat Dance in a photo finish for fourth place.

“I gotta say, to go off the track and come to win on the outside, that was pretty damned impressive,” Hull said after celebrating with a “wing dance” in Victory Lane. “I drove my [tail] off tonight.”

Sixteen-year-old Johnny Bruno of Castleton, Vt., made it five consecutive first-time winners in the O’Reilly Auto Parts Limited Sportsman division to open the 2019 season. The youngster had an entertaining battle out front with Matt Bilodeau for most of the 20-lap distance; Bruno led the first seven circuits before Bilodeau passed him on the outside, but Bruno returned the favor on a lap 12 restart and drove away. Bilodeau settled for the runner-up finish ahead of Mike Ryan, Anthony Warren, and Dave Snow.

It was a family reunion in the 25-lap Super Stock feature as West Rutland, Vt.’s Scott FitzGerald outran his son, Andrew, for the win. Mark Norris and Chris Murray took turns leading before the elder FitzGerald took over at the halfway mark. Andrew FitzGerald had a good race with Bill Duprey before taking second; Duprey, Garrett Given, and Josh Bussino completed the top five.

Shawn Moquin of Milton, Vt., continued his hot streak in the 20-lap feature for the Mini Stock division, taking his third win and fifth top-two finish in five starts. He took the lead from Craig Kirby just after halfway point, the soldiered on to the victory. Jake Barrows nipped Kirby at the wire for second place, with rookies David Sartwell-Cornell and Katrnia Bean next in line.

Thirteen-year-old rookie Evan Roberts of Fletcher, Vt., claimed his second win in the Friend Construction 500cc Mini Sprint division. The 20-lap race was cut short to 14 laps by time constraints, but Roberts had already made a nice drive from ninth at the start to take the lead seven laps in. Cody O’Brien finished second with Dakota Green a season-best third. Point leader Samantha Mulready was fourth and Joel Belanger ran fifth.

Ripton, Vt.’s Chris Sumner won a fun 50-lap Enduro Series race on the 3/10-mile infield short track, and the tight confines of the track made for some entertaining action. Sumner’s Honda Accord trailed Shawn Fountain for the first 20 laps, but he took over after the first of two red flags and never looked back. Kyle Botala drove a Chevrolet Colorado pickup truck to the runner-up finish, two laps behind Sumner. Kenny Torrey used the “slow and steady” approach to stay out of trouble and finish third, eight laps down.

The annual Kids’ Bicycle Giveaway was part of the event, and a record-shattering 63 bicycles, tricycles, and scooters were given to young fans ranging from one to 12 years old. Racing teams donated the prizes, including 12 bikes from the John St. Germain team and seven from Ron Antini Racing. Fans were also treated to the largest fireworks show in Devil’s Bowl Speedway history, presented by Noise “R” Us Fireworks.

Devil’s Bowl Speedway is back in action on Sunday, July 7 at 7:00 p.m., with the annual “Hometown Heroes” event presented by Rutland Regional Medical Center. All police, firefighters, rescue, and EMT personnel, and all active and retired members of the Armed Forces, will receive free grandstand admission when arriving in uniform or presenting identification. The Super Stock division will run a two-segment special event and all other weekly divisions will be in action. General admission is $20 for adults, $18 for seniors (62+), and free for kids 12 and under.