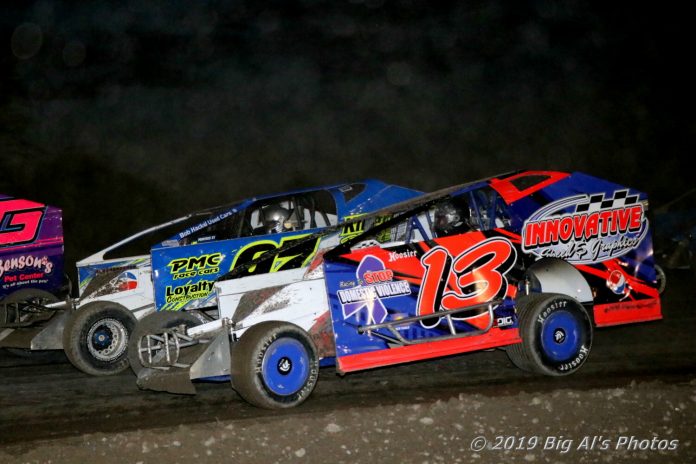 Manchester Center, Vt.’s Hoard finally parlayed a fast racecar into a win in the 30-lap Pepsi Sportsman Modified feature, after having several top-five finishes in recent weeks. Running mostly on the outside lane, he came from 21st starting position to blast past Tim LaDuc on a green-white-checkered restart with two laps left, earning his first win since September 2009. But that only tells part of the story of the race.

A huge pileup on lap 8 necessitated a red flag and left championship leaders Kenny Tremont Jr. and Adam Pierson in a big mess, with Pierson’s car upside down and partially on top of Tremont’s car; none of the drivers involved were injured, and both Pierson and Tremont returned to the race after making repairs.

Walter J. Hammond then squared off with LaDuc in a bare-knuckle battle for the lead that saw both drivers leaning on each other and trading body blows laps after lap. LaDuc cleared Hammond and pulled away at lap 18, but just one lap later Hammond spun his car and barrel-rolled in Turn 2; he walked away unharmed during the red flag.

A third red flag for a multi-car tangle stopped the race with four circuits left, followed by the final restart with two to go, giving hard-charging Hoard the opportunity he needed. When leader LaDuc chose the inside lane at the final restart, Hoard said he knew the race was his.


“Timmy fell right into the trap when he took the bottom,” Hoard said in Victory Lane. “I saw him go low and I said to myself, ‘You’re dead meat.’ I hung back just a little in Turn 4 on the restart and let him go, knowing I could use the momentum on the outside to pass him in Turn 2. It was perfect.”

LaDuc erased his string of bad luck with the runner-up finish. Jimmy Ryan, whose luck hasn’t been much better than LaDuc’s, was a strong third. Rookie Brent Warren netted his career-best effort in fourth, followed by Allan Hammond. Vince Quenneville and Bobby Hackel rebounded from a crash together to finish sixth and seventh, respectively, ahead of Tanner Siemons, Joey Scarborough, and Marty Kelly III.

The Green Mountain Gearheads Sprint Cars of New England tour made its third appearance of the season, and it was The Floyd Billington Show from start to finish. Mechanical woes knocked several cars out of the 25-lap feature, but Billington had everyone covered anyway. The South Glens Falls, N.Y., veteran was unmatched and sped away uncontested for his first Devil’s Bowl win since a Sportsman Modified victory in August 1999.

Kurt Conklin was a career-best second with Will Hull third. Clay Dow took fourth and Mike Kondrat finished fifth after running in second for most the race. For the second week in a row, a racecar ended up in an adjacent hayfield north of the speedway property line in the town of Benson, Vt., after Rick Stone’s wild end-over-end flip left his car in a crumpled heap; Stone was not hurt.

The technical inspection line decided the outcome for two support-division features, with both the O’Reilly Auto Parts Limited Sportsman and the Super Stock winners inheriting their victories after disqualifications. Mike Ryan vacated the win in the Limited class, while three of the top-four Super Stock drivers – original first-place finisher Chris Murray, runner-up Garrett Given, and fourth-place Curtis Condon – were also disqualified. All four drivers were found with unapproved valve springs in their General Motors “602 crate” engines.

After the penalties, original runner-up Johnny Bruno of Castleton, Vt., became the official winner of the Limited Sportsman race, for his second win in 11 days at the Vermont track. Marty Hutchins continued his recent string of solid runs in second, followed by David Boisclair, James Hanson, and Larry Gallipo.

Devil’s Bowl Speedway is in action on Sunday, July 21 at 7:00 p.m., as the Community College of Vermont presents the annual Mid-Season Championships and the Vince Quenneville Sr. Memorial 38-lap special for Sportsman Modifieds. Double championship points will be on the line for all five weekly divisions, and the annual driver autograph session will be held at intermission. General admission is $12 for adults, $10 for seniors (62+), and free for kids 12 and under.