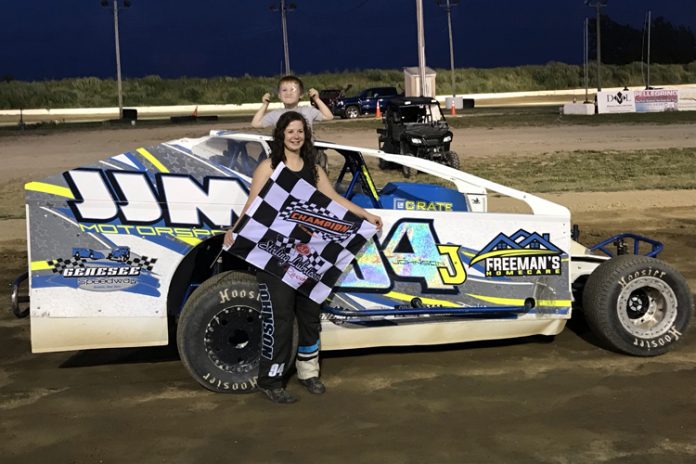 BATAVIA, NY – What was forecasted to be a dry night at the Genesee Speedway was threatened throughout the evening by rain showers in the area. Because precipitation never hit the 1/3-mile oval, racing moved along quickly while great racing was found in all five divisions.

Anytime Jeremy Wonderling invades the Genesee County Fairgrounds he is a threat to win in the Late Model division, but on the second lap of his heat race heavy contact with a spun car nearly ended his threat. Wonderling was able to survive that contact, which only damaged his spoiler, and qualify for the redraw, where he earned the outside pole and gave him the position he needed to win his third feature in as many starts in Batavia this season.

Wonderling, of Wellsville, led all 25 laps of the Late Model feature, most of it without much challenge for the lead. With about 10 laps remaining, defending track champion JJ Mazur began to reel in the No. 3J and it appeared as though a lead change might be forthcoming, but “Mr. Excitement hit his marks in lapped traffic and pulled back away to claim the victory.

“The track was really good tonight. It was a lot of fun,” declared Wonderling in Victory Lane. “I figured we had a pretty good lead because I didn’t hear anyone but knew some guys gambled on tire compounds and wasn’t sure if anybody would be stronger.”


The 25-lap event was filled with great battles, including JJ Mazur working hard to hold off Jimmy Johnson, who would settle for third. Bill Holmes patiently moved by a host of cars to drive up to fourth, ahead of Scott Waters who posted a solid top five.

Sarah Johnson was in second place early in the Sportsman Feature until her car started to fade on the top of the track; that was until a crash amongst the top five cars on the bottom groove allowed her to avoid the wreck on the top of the speedway and inherit a lead she would never relinquish. Johnson, of Batavia, took the lead on lap 17 when leader Jim Harbison went around in front of the pack, which collected point leader Kyle Inman and saw Dave Conant roll over in the process. When the field cleared, Johnson pulled away from Cameron Tuttle in the final eight circuits to become the sixth different winner in seven races this season.

“I could see (Kyle Inman) starting to stack up at the beginning of that wreck and I figured I would go high but then I saw cars crashing and flipping and wasn’t sure I would make it through but somehow I did,” recalled Johnson in Victory Lane, who then had to reset herself under the ensuing red flag for the restart as the leader. “I thought about how I had fallen back from second to seventh running the top and knew I had to use the bottom and just thought about what my dad always said about keeping the car smooth.”

Tuttle was involved in an early race incident but was able rebound to score the runner-up finish. Zach George, who was running third when the field stacked up on lap 17, was able to restart at the back and get his No. 126 back up to finish third. Byron Dewitt was able to finish in fourth for the second consecutive race while Austin Susice also rebounded from the major crash to complete the top five.

Dennis Cummings is the defending Street Stock Champion but until Saturday Night it had been over a year since he won a feature at Genesee. Cummings, of Wellsvile, ran down point leader Josh Pangrazio just after halfway to take the lead and then took off from the pack to capture his long-awaited victory. Cummings had to repair his car over the last two weeks from damage and had his car on point on a very slick surface. As the No. 74D pulled away, Josh Pangrazio and others struggled to find bite on the track at the end of the night. Pangrazio, nearly looped his No. 7 on lap 12 and had to drive through the infield, handing second over to Jesse Qutermous. The second-place showing for Qutermous was his best result of the year, while Pangrazio was able to salvage a third-place effort. John Zimmerman and Bill Taylor rounded out the top five.

Cole Susice thought he had thrown away his first chance at a win this season on the final lap when he surrendered the race lead, but post-race technical inspection would give him back the victory. Susice, of Ransomville, was declared the winner of the Mini Stock Feature after Brandon Shepard’s car failed technical inspection. It put a damper on what was a wild battle for the lead between that duo, as they raced each other closely but fairly. Susice was strong throughout but Shepard had his car setup for a late charge and appeared to steal the win away. After the inspection changed the order, Brad Whiteside would earn second place over Eric Weis in a tight battle. Point leaders Rich Conte and Ashley Blech completed the top five.

Jake Bansmer took over the lead on lap four of the Bandit Feature and checked out from the pack to run away and win his first career feature. Bansmer became the fifth different winner in the division this season, driving around point leader Allison Dewitt on the race’s only restart. In three prior starts, Bansmer had yet to crack the top five but picked things up in a big way to hold a significant gap over Dewitt, who would cross in second and Tyler Guzzardi who completed the podium.

The only casualty on the night that lasted just three hours was that in order to keep the show moving the autograph session was pushed back to next Saturday, July 20. Also on the card next week is a make-up feature for the mini stocks, as well as fireworks. Action will start at 6:00 p.m. For more information, visit www.GeneseeSpeedway.com.