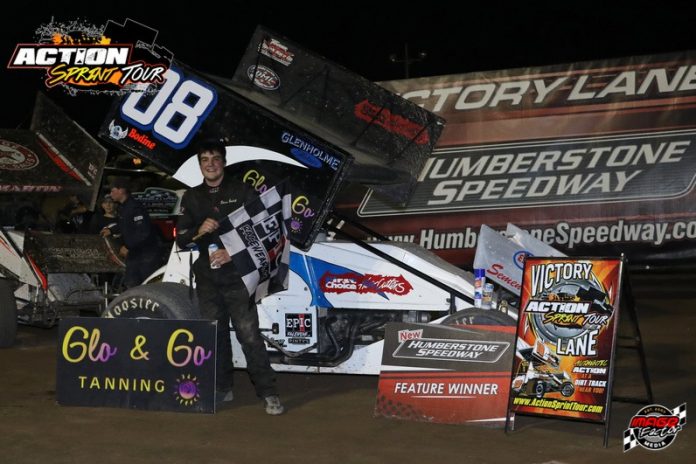 Steven Beckett and Spencer Davis were on the front row for race number 5 of the Action Sprint Tour season with Beckett showing the way. Josh Hansen would take second away from Davis with Liam Martin, Blaine Barrow, and Paul Klager racing in fifth early on. Beckett and Hansen would pull away from the field as the leaders would hit lap traffic on lap 10. Tyler Ward, Al Gilletta and Noelle Teal spun in turn three to bring out the races second caution. Beckett would pull away on the restart from Hansen with Martin, Klager and Barrow raced in the top five. Brady Chastney spun in turn four to bring out the caution with seven laps to go. The restart green would see Beckett continue to show the way and would lead Hansen by two car lengths. A three-lap dash for the cash saw Beckett continue to lead as Klager looked and completed the pass to take third away from Martin. Ryan Hunsinger made his presence felt late in the event as he entered the top five. Martin would be able to get around Klager to regain third but in the end, it was Steven Beckett scoring his first career win.

“It is awesome to get our first win here” stated an elated Beckett in victory lane. “We were so consistent and tonight it paid off”.

“I was a little bit too tight tonight” stated second place finisher Josh Hansen. “Can’t complain we had a good points night on the tour”.

Podium finisher Liam Martin said “we had a good car tonight. On those restarts Steven (Beckett) and Josh (Hansen) were just gone and I had all I could do to keep up.”


Finishing the top five were Paul Klager and Ryan Hunsinger. Race number six will take place at the Ohsweken Speedway as part of the Northern Summer Nationals.

Adam Leslie and Tom Richau were on the front row for the 25-lap Cosco Haulage DIRTcar Sportsman feature with Leslie showing the way. With Leslie leading, past track champion Greg Panunte started to work his way through the field and by lap seven, would use the outside groove to get around Leslie to take over the lead. Brad Rouse and James Michael Friesen would battle the entire race for third place as Panunte and Leslie pulled away from the field. Rouse would close in on the lead duo, but a mid-race bobble off turn two slowed his progress. Panunte would pull away from Leslie to score his first win of the season.

Jim Lampman and Barry Beck Jr shared the front row for the JC Auto Thunderstocks with Lampman showing the way. Dave Bailey would take the lead away prior to the halfway mark. Mason Smith spun in turn one to bring out the races first caution on lap 13. On the restart, Billy Bleich Jr would challenge both Dinning and Bailey for the lead. Bleich would challenge Bailey late in the event with Bailey scoring his third win of the season.

Go Fast Teeple and Mike Sarantakos brought the Glo & Go Tanning Mini Stocks to the green flag with Teeple showing the way. Craig Vlasic moved up from his ninth starting spot to take the lead on lap six. From there, Vlasic, Kyle Rothwell, and Evan Curtis put on a battle for the lead that lasted the entire second half of the race. The top three would tangle late in the event, causing Curtis and Rothwell to lose several positions on the racetrack. Vlasic was able to keep the lead and would go on to score his fourth win of the season.

Frank Perry and Jay Dupuis shared the front row in the Airhardt Deliveries Pro 4 Trucks main event with Perry showing the way. Dylan Llord would take the lead away at the end of the first scored lap and would start to pull away from the field. After a Clinton Barrick roll over in turn two that brought out the red flag, the field would go back under the green with Llord and Mitch Dumont pulling away from the field.

NEWS AND NOTES: 90 cars signed in pitside for the racing activities.

Next Sunday night, Zanchin Truck and Trailer presents the Super Late Model vs Crate Late Model challenge. The GRIT Sportsman tour will also make their second stop of the season at Humberstone plus Thunderstocks and the King of the 4’s for the Mini Stocks and Pro 4 Trucks. Also, on the card will be the V6 division from Merrittville Speedway. Gates will swing open at 4pm and showtime is at 6:30pm. All kids in attendance can check out the activities with the Humbee’s Kids Club presented by the Port Colborne Dairy Queen happening at 5:00 pm each race night.