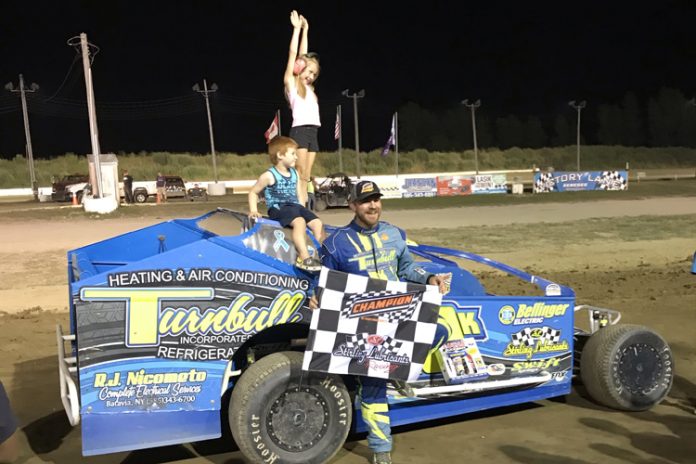 BATAVIA, NY – A super seven-feature card saw an even mix of first-time winners and point leaders finding their way to Victory Lane on a warm summer night.

The Late Models Ran Double Features on the night with the first a carried-over feature from July 4th. Back on Independence Day, Brad Mesler was set to start on the pole with a car that he had just picked up two days earlier, and with three extra weeks to get acclimated to his new ride he made the most of his prime starting spot.

Mesler, of Wellsville, led wire-to-wire in the 25-lap caution-free event to return to Genesee Victory Lane for the first time since 2017. Not only did Mesler capture the win, he had to hold off Jeremy Wonderling in the process, who had won in all three of his prior visits to Batavia in 2019.

“When that race rained out I told my guys it was a blessing in disguise,” admitted Mesler in Victory Lane. “Jeremy Wonderling is one of those guys you never want to have to race against because he’s so good but he has helped me out a lot over the last month to get this thing right and it was great tonight.”


Wonderling ran up from fourth to second off the first set of corners to start his pursuit of Melser. Around halfway, the No. 3J was able to reel in the leader but as they drove through lapped traffic Mesler got stronger and was able to pull away for the victory.

“Jeremy called me during the week and said any time he comes up to Batavia he wins and I told him it might be different with me starting on the pole,” snickered Mesler after the race. “I saw the yellow (No. 3J) peek underneath me a few times and he could have forced the issue too but he’s a good guy and kept it clean.”

Wonderling would settle in for second place while a great battle ensued for third with Doug Ricotta moving by Greg Mrzywka on the final lap to complete the podium positions. The fourth place result for Mrzywka would still be good enough for a career best for him in the late models. Scott Waters rounded out the top five.

In the second feature, Kurt Stebbins drove to the front from the outside pole but unlike most of the Late Model features at Genesee this year, a driver deeper in the pack was able to get to the front. Bill Holmes, of East Concord, started sixth and drove up through top five to capture his first win of the year.

“I thought when we redrew sixth that it would be too tough to win but the car just kept getting better through the race,” said Holmes in Victory Lane. “We’ve been pretty good all year but just haven’t had it all come together and thought it wouldn’t tonight with the draw, but I guess it worked out.”

The only caution flag of the race was shown after one lap, which allowed Holmes a second chance for a double-file start in which Holmes got to third and then got by polesitter Austyn Fugle for second shortly after. Holmes started to cut significantly into Stebbins’ margin on lap 14 when the No. 26 slowed quickly, allowing Holmes to slide up in front and take the lead right then. Without any other caution periods, the No. 65 would ride off to a comfortable win.

Earlier in the night, Holmes had scored his first heat win of the year. Kurt Stebbins would come across in second, while Late Model rookie Austyn Fugle had a career-best finish in third, moving back by point leader JJ Mazur to place him fourth. Beamer Guzzardi rounded out the top five.

The Sportsman concluded a busy week of racing in a fashion similar to most of the others over the last eight days: with Kyle Inman scoring the win.

Inman, of Darien, drove by Dave Conant on lap 14 and pulled away after the race’s final restart to claim his fifth win of the year and third in the last eight days.

“This track was so awesome again tonight,” claimed Inman after the race. “They listen here about what we need to have good racing and it is all about having two grooves and we had it tonight.”

The 25-lap feature’s first caution occurred on lap 10, just after Inman had taken third. With leader Conant restarting on the inside lane, Inman was able to follow the No. 44 to get himself up to second on the restart and allowing him to apply pressure for the top spot. Inman continued to put his No. 20k higher and higher on the track until he was final able to clear the No. 44 coming to complete lap 14.

As Inman rode off to the win, Conant would hang on for a season-best second place effort. Ray Smith, Jim Harbison and AJ Custodi would complete the top five.

The NY6A Micro Sprints made their lone visit of 2019 to Genesee and saw a great three-car battle throughout the 15-lap feature, with Eric Wise coming out on top. Wise led the opening circuit but saw Nick Groff drive by on the second lap. Wise was able to get the lead by on a lap three restart and despite Groff and Michael Kaiser Jr pushing hard to steal the win away. A caution on the final lap would set up a wild single-lap sprint to the checkered flags. Wise was able to keep his car steady as Groff made a big run off the final corner but would come up a car-length shy. Kaiser would cross in third while DJ Shuman and Danny Knoll III rounded out the top five.

Josh Pangrazio captured his sixth Street Stock win of the season, his second in a row, with an impressive pass on Dennis Cummings on lap 14 and then driving off for the victory. Pangrazio, of Oakfield, nearly saw his chance at a win go out the window on lap two when he nearly spun his No. 7 around in turn four; thankfully for the point leader he was able to straighten his car out and resume his charge to the front. On lap seven, he made a three-wide move around Bill Taylor and Jesse Qutermous to take second away and then chase down Cummings for the top spot. Coming to halfway, some light rain hit the track and when it did, Cummings slipped up the track resulting in Pangrazio running in to the No. 74D. Once the rain subsided, Pangrazio was quick to hound the leader and eventually take home the win. Cummings would settle in to second while Jesse Qutermous crossed in third. John Zimmerman and Kurt Stebbins completed the stout top five.

Three-time Mini Stock Champion Brad Shepard made his first feature start of 2019 in the division pay off in a big way as he drove by point leader Cole Susice on lap eight and held the field at bay to become the eighth different winner of division. The LeRoy driver was utilizing his daughter’s Deanna car after fixing replacing a blown motor that occurred last Saturday by dropping a new engine in the car last night. Susice would hold on to second while Deanna Jackson finished two spots behind her father in third. Dante Mancuso was fourth with Ashley Blech completing the top five.

Greenley George scored her first career feature victory in the Bandit event as she rallied from a lap one incident to become the sixth different winner in the youth class this season. George, of Wilson, got spun around on the opening circuit but was up to second by the completion of the restart lap and by lap five was in front of Brian Gregory. Jacob Bansmer also charged up through and was applying heavy pressure as the duo encountered lapped traffic coming to the white flag. George was able to use the lapped car as a pick to keep Bansmer at bay and drive away for a win that was long overdue. Bansmer and Allison Dewitt would round out the podium.

A busy month of August kicks off next Saturday with the Terry Pangrazio Memorial, featuring all five weekly classes. Racing starts at 6:00 p.m. For more information, visit www.Genesee-Speedway.com.