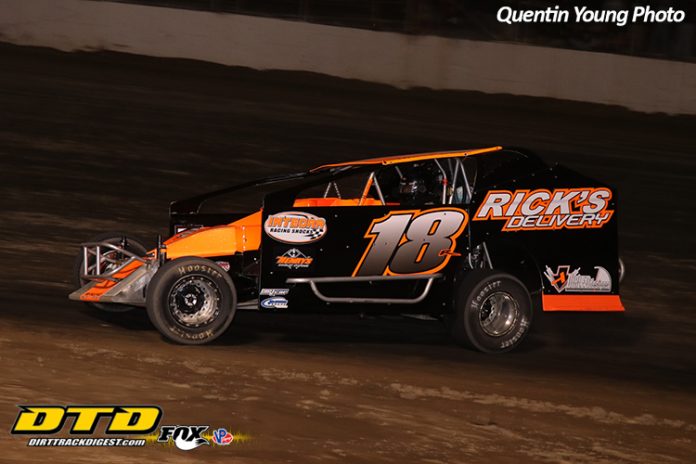 PORT COLBORNE, ON –  Past track champion, and Mr. DIRT Brad Rouse from St. Catharines, Ontario celebrated in victory lane after winning the main event for the Cosco Haulage DIRTcar Sportsman as Performance ATV & Leisure presented the All Canadian Championships at the New Humberstone Speedway Sunday night. Chad Homan from Macedon, NY scored his fifth win of the season in the Pro Fabrication RUSH Late Models. Justin Ramsay from Belleville, Ontario Anthony Kelly Jr from Niagara Falls, Ontario won round two of the King of the 4’s for the Glo & Go Tanning Mini Stocks and Airhardt Deliveries Pro 4 Trucks. Mark Shadwell from Hamilton, Ontario won the Vintage Car feature as part of the Thunder on the Dirt Vintage Car Series.

Dylan Davidson and Greg Panunte would bring the Cosco Haulage DIRTcar Sportsman to the green with Panunte taking the lead. Brad Rouse would take second away from Davidson on lap three. Rouse would take the lead on lap 15 from Panunte. Rouse would open up the lead and would pull away from the field. Lap traffic would allow Adam Leslie and James Michael Friesen to move into second and third respectively. Rouse would lead the remaining 25 laps to score the win, his fourth of the season.

Rob Pietz and Chad Homan brought the Pro Fabrication RUSH Late Models to the green flag for their main event with Pietz showing the way. Homan and Sam Pennacchio would move into first and second on lap seven with David Pangrazio moving into third after starting 12th on the grid. Pennacchio started 13th on the grid and would challenge Homan for the lead. Homan would start to pull away as Pennacchio and Pangrazio battled for second place. Pangrazio would take the runner-up spot away just after the halfway mark. A one lap shootout decided the main event with Homan holding off Pangrazio and Pennacchio to claim his second All Canadian Championship.

Billy Bleich Jr would take the lead off the start of the JC Auto Thunderstock feature with Justin Ramsay, Ken Sargent, and Dave Bailey pulling away from the balance of the field. Bleich would keep the lead until after a mid-race restart, seeing Ramsay taking the lead away. Bleich would challenge Ramsay in the closing laps but the driver from Belleville would be able Ramsay would hold off Bleich and Wade Purchase to score the victory.

Round two of the King of the 4’s for the Glo & Go Tanning Mini Stocks and Airhardt Deliveries Pro 4 Trucks saw Leroy Buscumb and Dylan Llord bring the field to the green flag for their feature event with Buscumb showing the way over Tyler Lafantaisie and Kyle Rothwell. Rothwell would take second and would go after Buscumb for the lead. Lafantaisie would take the lead away from Buscumb. After multiple cautions bunched the field up, Jeremy Cooper would work his way through the field and would battle with Lafantaisie for the lead. The lead duo would both have issues late in the race, handing the lead to Anthony Kelly. Anthony would lead the final few circuits to earn his first career win at Humberstone, and first All Canadian Championship.

Andy Imbeault would take the lead from the drop of the green for the main event for the Thunder on the Dirt Vintage Car Series. Imbeault would spin in turn three to bring out the caution on lap six that also collected Duane VanAlstine. The restart would see Rick St. Pierre take the lead away. Mark Shadwell would take the lead away on lap 10 after St. Pierre went to the pits. Shadwell would go on to score the win over Kevin Lawes, Tim Natalino, Steve Longo, and Conrad Baker completing the top five finishers.  Qualifying heats were won by Andy Imbeault and Tim Natalino.

NEWS AND NOTES:  103 cars signed in pitside for the All Canadian, an event that dates to 1958. Leroy Buscumb (King of the 4’s), Justin Ramsay (Thunderstocks), Rob Pietz (RUSH Late Models), and Dylan Davidson (DIRTcar Sportsman) all set fast time during time trials Sunday morning. B-Mains were used to set the balance of the field after the top 10 in time trials were locked into the feature events

Racing action continues Sunday, August 11 as Verge Insurance presents the Action Sprint Tour presented by RaceRivalz.com alongside the Sportsman, Thunderstocks, Mini Stocks and Pro 4 Trucks. Also on the docket will be an Eve of Destruction Enduro qualifier. Gates will swing open at 4 pm and showtime is at 6:30 pm. All kids in attendance can check out the activities with the Humbee’s Kids Club presented by the Port Colborne Dairy Queen happening at 5:00 pm each race night.