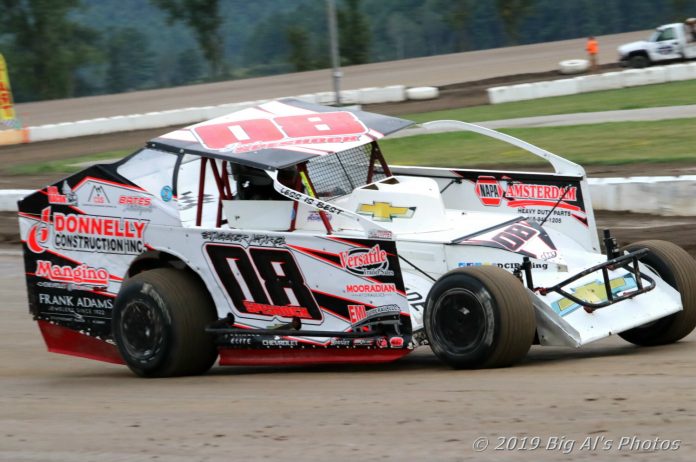 WEST HAVEN, VT – Jack Speshock has not had much go his way in the 2019 stock car racing season, but for at least one night he was untouchable. The Malta, N.Y., driver dominated the 30-lap Pepsi Sportsman Modified feature on Fabian Earth Moving Night at Devil’s Bowl Speedway on Sunday, August 18, for his first win at the track, topping a list that included first-time winners in four of six races at the event.

Despite two rain delays and an extra division on the card, the entire program was completed in just over three hours. Heavy rain moved in and soaked the speedway less than 10 minutes after the final checkered flag.

Speshock races full-time at Albany-Saratoga Speedway and Plattsburgh Airborne Speedway in his native New York, and he has also been a part-time racer at Devil’s Bowl in recent seasons. The summer had been nothing short of disastrous for Speshock with a seemingly endless streak of crashes and blown engines. On Sunday night, though, he led every lap that he ran with dominant victories in his qualifying heat and the main event.

“This is a brand-new car and I just wanted to test it out before the Vermont 200 on Labor Day weekend,” Speshock said. “We didn’t expect to win, but we really needed a good night. It’s been a tough year.”

Brandon, Vt.’s Joey Scarborough broke out of traffic late but was unable to track Speshock down and took his second runner-up finish in a row. Third-year racer Mike Fisher had an outstanding effort and scored the best finish of his career in third place, while Marty Kelly III and rookie Joey Roberts rounded out the top five. Mike Palmer was sixth ahead of Robert Bublak Jr., Josh Sunn, Brian Whittemore, and Frank Hoard III.


A massive crash on the opening lap collected several top drivers including point leader Kenny Tremont Jr., and saw Walter J. Hammond end flip his car for the third time in 2019; no injuries were reported. Tremont finished 15th in the race with heavy damage, but still holds a comfortable 81-point edge on Hoard, 579-498.

Michaël Forcier made history in the first-ever Devil’s Bowl Speedway appearance for the traveling Can-Am Mod Lite Series. The St-Bonaventure, Qué., driver scored his first victory on American soil and became the first Québécois racer to score an official win at Devil’s Bowl since Jean-Paul Cabana in 1973.

Seventeen Mod Lite teams from New York, Québec, and Ontario came with cars that resemble 5/8-scale dirt Modifieds with 200-horsepower, 1,000cc motorcycle engines. Forcier led all 20 caution-free laps but had to hold off point leader Jeff May of Hamilton, Ont., in the final three circuits, and he beat May to the win by less than a car length.

May was scored second with Fulton, N.Y.’s Rick Demo third. Keven Boucher-Carrier finished fourth and Steve Comeau was fifth. The finish is unofficial pending a review of post-race inspection by Can-Am series officials.

Marty Hutchins became the eighth first-time winner in 11 races for the O’Reilly Auto Parts Limited Sportsman division with an easy stroll to victory. The Poultney, Vt., racer had scored three podium finishes prior to the win and had the strongest car all night to dominate the 20-lap race. Matt Bilodeau posted a solid runner-up showing and Austin Chaves equaled his best finish in third. Anthony Warren and Dave Snow were next in line. James Hanson hold the point lead with a 21-point advantage over Warren, 542-521; Hanson finished eighth in the race.

Dirt rookie Mark Norris of Benson, Vt., took his second Super Stock win in an entertaining 25-lapper. Garrett Given took the lead from Andrew FitzGerald at lap 17 but got his car out of shape in Turn 1 four laps later. Norris pounced at the opening and drove off to the win. Josh Bussino crossed the line in second but was disqualified when his car failed inspection with a weight violation. Given inherited the runner-up spot, followed by FitzGerald, Bill Duprey, and Kaleb Shepard. Scott FitzGerald retains a big 78-point lead over his son, Andrew, 565-487.

Craig Kirby had the biggest night of his Mini Stock career by scoring his first victory and taking over the point lead. The Winooski, Vt., native used patience and a fast car to drive from the 10th starting position to take the lead with five circuits to go in the 15-lap race. Rookie David Sartwell-Cornell challenged Kirby in the final two laps but settled for second place. Willie Rice had his best outing in two years to lead eight laps and finish third. Joe Malzac and Tim Simonds completed the top five. Kirby has a 19-point lead on Jake Barrows, 571-552.

Evan Roberts kept his dominant run going in the Friend Construction 500cc Mini Sprint division for his fifth consecutive win and his seventh overall on the season. The Fletcher, Vt., rookie, age 13, hasn’t lost a race since July 7. Jack Koponen scored the best result of his first season as the runner-up, followed by John McPhee Jr., Cody O’Brien, and Kevin Smith. Roberts has a 36-point lead on Shawn McPhee, 581-545.

Devil’s Bowl Speedway is back on Sunday, August 25 at 7:00 p.m. for the annual “Double Stack Night” with double feature races for all five weekly divisions, as well as the 8th annual Sugar & Spice Restaurant “Great North American Pancake Eating Championship” at intermission. Regular admission is $12 for adults, $10 for seniors, and free for kids 12 and under. The track is also readying for the $12,000-to-win Interstate All Battery Center “Vermont 200 Weekend” on August 31 and September 1. 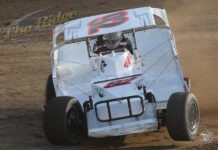