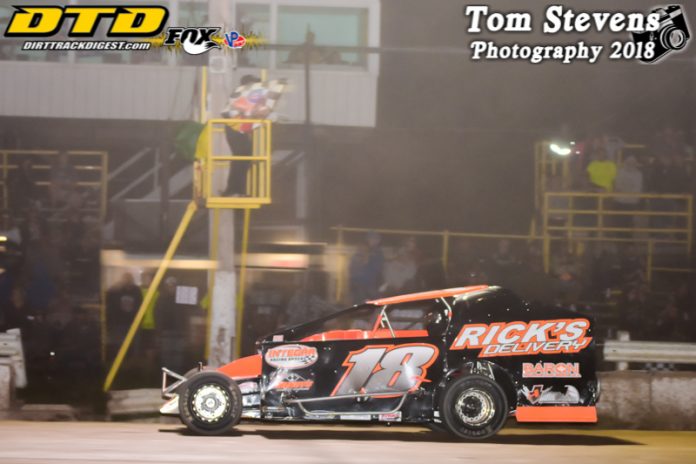 Fans were generous in their donations to Port Cares in Port Colborne as part of Meridian’s Race to Fill the Food Bank initiative.

Dan Ferguson and Greg Panunte brought the Cosco Haulage DIRTcar Sportsman to the green flag for race three of the Western Region for the Sportsman Super DIRTcar Series with Ferguson showing the way. Brad Rouse would take the lead away on lap two and would pull away from the field with Dylan Davidson racing in second. Greg Panunte and Cody McPherson battled for several laps for third with McPherson getting the position past the halfway mark. Rouse would pull away from Davidson to score the win.  Races four and five of the western region will be at Brighton Speedway as part of Applefest Weekend.

Jason Haskell and Brad Authier were on the front row for the Open Late Model Challenge between the Super Late Models and Pro Fabrication RUSH Late Models with Authier showing the way.  Rob Pietz would take second away from Haskell while negotiating lap traffic on lap 10. The red flag came out on lap 11 as three-quarters of the field piled entering turn one after a car hit the front stretch wall. All drivers were alert and talking with medical personnel. On the restart, Authier would continue to show the way over Chad Homan. Both Authier and Homan would have issues while leading, handing the lead to Adam Ferri. Ferri would pull away from the field to score the feature win.

Jim Lampman and Barry Beck Jr was on the front row for the JC Auto Thunderstocks for race three of the CanAm Thunderstock Challenge with Lampman taking the lead. Dave Bailey would take the lead away from Lampman on lap four. Bailey and Billy Bleich Jr would pull away from the field. A late-race caution would bunch the field up for the restart and at the end, it was Bailey earning the win. The championship event for the CanAm Thunderstock Challenge will take place on Saturday, September 14 at Ransomville Speedway for the annual running of the King of the Hill.

Gillian Hils and Evan Curtis were on the front row for the King of the 4’s finale for the Glo & Go Tanning Mini Stocks and Airhardt Deliveries Pro 4 Trucks with Curtis showing the way. Dylan Llord would take second away from Hils on lap four and would go after race leader Curtis. Mitch Dumont raced in third after an early race caution. Llord would take the lead away from Curtis on lap 20 and would hold off Curtis and Dumont to score the feature win.

The books will close on the 2019 season next Sunday, September 15 as ATTAR Metals presents the Eve of Destruction.  Pit Gates will swing open at 8 am, with grandstand gates opening at 10:00 am and showtime is at 1:00 pm.