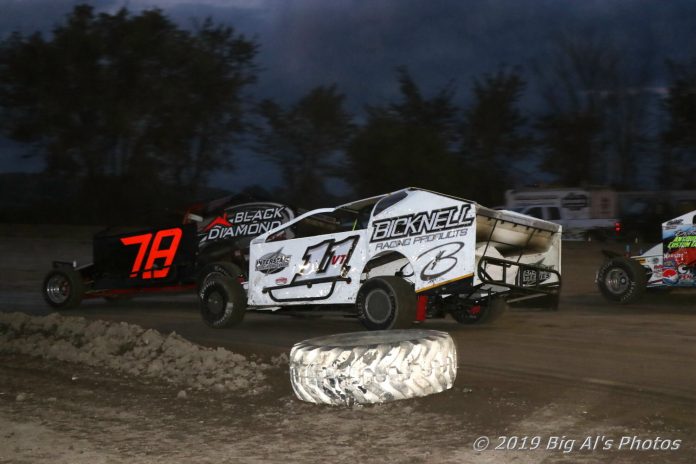 WEST HAVEN, Vt. – Joey Scarborough seemed to be overdue for a win at Devil’s Bowl Speedway, and he ended his wait with a spectacular drive on Sunday, September 8. The Brandon, Vt., racer stole the lead in the final moments of the 30-lap Pepsi Sportsman Modified feature for his first victory of the season. Also landing in the winner’s circle during the event were Dave Snow, Chris Murray, Shawn Moquin, Shawn McPhee, and Dan Desforges.

Scarborough’s tough-luck summer had begun to turn for the better in recent weeks, but Scarborough needed a little luck to get to the front, too. Vince Quenneville and Justin Comes were engaged in a very entertaining fight for the lead with four laps to go when the race’s second and final yellow flag waved, setting up a restart that brought Scarborough to their back bumpers.

With the trio turned loose in the final four laps, the fans got a memorable show with wild moves and exciting lane changes and passing. Scarborough got by Quenneville in Turn 4 coming to the white flag to take the lead and was able to streak away in the final lap for the win. Comes grabbed the runner-up spot from Quenneville just before the finish. Billy Lussier scored his first top-five run of the season in fourth place, as did John St. Germain in fifth. Tim LaDuc, Adam Pierson, Kenny Tremont Jr., Wayne Stearns, and Josh Sunn completed the top 10 in order.

With his eighth-place run, Tremont mathematically clinched the 2019 Devil’s Bowl Speedway championship, extending his record to 10 titles in the track’s headline division. Pierson and Frank Hoard III still have a score to settle for the runner-up spot, with Pierson ahead of Hoard by just five points entering next week’s season finale.

Dave Snow continued the strong night for Brandon, Vt., racers by earning the first win of his career in the 20-lap O’Reilly Auto Parts Limited Sportsman feature. Snow led every lap but had cousins Anthony Ryan and Anthony Warren breathing down his neck in the second half of the race; Snow is the 10th different first-time winner in the division in 2019. Ryan finished second with Warren third, followed by James Hanson and Johnny Bruno.

The Limited Sportsman championship fight is a tense three-way slugfest, with Hanson leading by just 15 points of Bruno and 17 over Warren entering the finale.

Fair Haven, Vt.’s Chris Murray ran away from the Super Stock field for his fifth win of the year. Murray was far ahead of the carnage that slowed the race and cut the distance from 20 laps to 17 by time constraints. Several multi-car wrecks shuffled the order repeatedly, but Murray was in command. Rookies Cam Gadue and Kaleb Shepard were contenders throughout the race and earned career-best finishes in second and third, respectively. Andrew FitzGerald came from 15th to finish fourth and early leader Mark Norris rebounded from a crash to finish fifth.

Champion-to-be Scott FitzGerald had a rough outing but finished 10th. Murray and Andrew FitzGerald are 20 points apart in the race for second place.

Shawn Moquin of Milton, Vt., made it two-for-two in his stint with a Mini Stock car borrowed from New Hampshire driver Chris Conroy. Moquin needed just four laps to get through three-wide traffic from his 12th starting position to the lead and was never challenged for the rest of the 15-lap distance. Craig Kirby finished second ahead of rookie David Sartwell-Cornell, Jake Barrows, and Tim Simonds. Kirby has a 21-point lead on Barrows, with Moquin just five more points behind.

Rutland, Vt.’s Shawn McPhee posted his third Friend Construction 500cc Mini Sprint victory of the season and turned that division’s point battle into the closest one of the year. The 14-year-old ran away with the win ahead of Cody O’Brien, Dakota Green, Evan Roberts, and Kevin Smith. Roberts, 13, now leads McPhee by only four points – the equivalent of just two on-track positions – going into the last event.

Dan Desforges made it three wins for Brandon, Vt., in the Street-Legal Spectator Races, driving his brand-new 2019 Kia Soul to the win in a series of one-on-one elimination races. Desforges beat the 2012 GMC pickup truck driven by Salisbury, Vt.’s Gary English in the final round.

Devil’s Bowl Speedway closes its 53rd stock car racing season on Sunday, September 15 at The Stove Depot Championship Finale. Title winners will be officially crowned in all five divisions, with a special 50-lap main event for the Sportsman Modifieds; the Enduro Series will also run a special race. General admission is $15 for adults, $13 for seniors (62+), and free for kids 12 and under. Racing starts at 6:00 p.m.