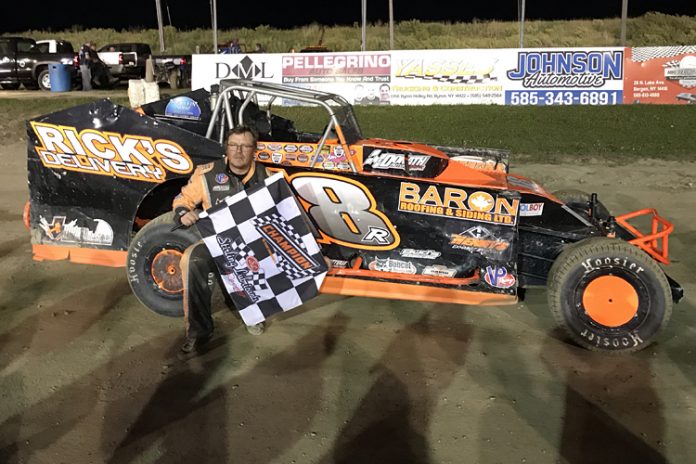 BATAVIA, NY – Perfect weather conditions and 124 cars in the pits were the recipe for a great night of racing for the preliminary night of the Third Annual Topless Crate Nationals, presented by Dale Valley Diescast. When the very limited dust the Genesee Speedway offered up settled, some favorites and some major surprises found their way to Victory Lane.

Dustin Waters had never even run a RUSH Late Model at the Genesee Speedway before Saturday Night, but that didn’t seem to matter as the part-time wheelman put on a clinic to score what is easily the biggest win of his career.

“I’m ecstatic. I actually don’t even have words for this.  This means everything,” declared Waters in Victory Lane.  “We took 3 or 4 years off and I had the itch to get back in it and got my Brother John’s car and can’t believe we are here.”

Waters was quickest in time trials for the second heat, which featured his brother, John.  The driver of the No. 14 then walked off to a comfortable heat race win and then snatched the outside pole position for the 25-lap feature.

“We had a good car all night but just wanted to run top 10 in the feature,” Waters admitted afterwards.  “We took a gamble on the tire compound and wanted to get in front and have the race run green and that’s exactly what happened.”

Waters quickly got around polesitter David Lyon and then checked out from the No. 14L and the rest of the pack until just after halfway when he caught the back of the field.  With a hefty pace being set, it would not be until two laps remaining when he finally lapped a car on the track and by that point the race was almost over.

Waters’ inexperience at Genesee was clearly not a hindrance, nor was it for David Lyon, who made his first appearance at Genesee pay off with a fine runner-up showing.  Down the stretch Lyon had reeled in Waters but could not get to the point of setting up a pass.  Defending Topless Nationals Champion Jason Genco was third while locals Jon Rivers and JJ Mazur rounded out the top five.

Earlier in the night, the Sportsman race saw Canadian Brad Rouse steal away a victory.

After taking second place on a lap eight restart, Rouse was patient yet persistent in his attempts to take the lead from Cameron Tuttle, after 13 laps worth of attempts he finally found the opportunity he was looking for and got in front and stayed there.

Rouse, of St. Catharines, Ontario, took the lead from Tuttle with a nifty slide job in turn one entering turn one on lap 21 and then pulled away to win the Preliminary Night Sportsman Feature for the second year in a row.  After pulling the 10th starting spot, the cards in his favor to pull off the win on the night but found a way.

“I told my son he was grounded,” quipped Rouse in Victory Lane about the poor redraw. “But I knew we had a really good car and just picked our spots until we got to second. (Tuttle) ran a really good race and on that final restart I changed my line a little bit and pushed a little harder and was thankfully able to clear him (on lap 21).

Rouse had driven from 10th to sixth place by the time the first caution occurred on lap five.  Upon the restart he was inside the top five and then capitalized on the lap eight restart when Track Champion Kyle Inman got pushed around and the inside lane got slowed up.  For the first seven laps, Inman had stalked Tuttle utilizing the bottom lane while Tuttle ran on the top.  When Inman lost second, it was time for Rouse to take over the stalking.

Tuttle appeared poised to capture the biggest win of his young career but as the race wore on, the top line became too long around, which allowed the 18R to sneak underneath.  Tuttle will still settle for a fine second, with Ricky Newton narrowly holding off fellow former Topless Nationals Champion Kyle Inman for fourth.  Brett Senek rounded out the top five while Dave Conant drove up from 22nd to finish in sixth.

The RUSH Sprint Cars were also part of the festivities with Chad Ruhlman putting on a clinic to win the 20-lap feature.  The wingless sprint cars with crate power had only one caution on the night, occurring on lap one and after that point ran off a smooth race.  Ruhlman had to hold off Brandon Blackshear on the opening two laps and Blackshear looked to the bottom but Ruhlman was too strong.  It was the ninth win of the year for the driver that swept both races at Genesee in 2018, as he drove away to win by 2.2 seconds.  Jeremy Weaver made a fine move to move by Blackshear on lap 11 to take second and hold on to capture the runner-up spot.  Kevin Ruhlman, who won his heat race, crossed in third while Blackshear and Steve Pedley rounded out the top five.

Josh Pangrazio put on a dominant performance to capture his 10th win of the season at Genesee in the Street Stocks.  Pangrazio, of Oakfield, took the lead from Andy Eastman on a lap 3 restart when Eastman elected the bottom line, allowing the 2019 Track Champion to power around on the outside.  Andy Eastman was running in second until lap seven when he pancaked the turn four wall was out for the race. From that point on, the No. 7 was untouchable despite a number of restarts in an event mired by cautions.  Bill Taylor would move up and was a solid second with Jesse Qutermous completing the podium.  Dan Schulz and Bob Buono ran up to round out the top five.

Brandon Shepard captured his fourth win of the season in the Mini Stocks, with this one worth $600 in a strong performance to remain the winningest driver of the season.  Shepard inherited the lead when Eric Weis broke while out in front of the field. Dante Mancuso made some feverish charges late but was unable to move on by and would have to settle for second.  Ashley Blech moved up fast to finish in fourth while Don Whiteside and Ryan Allen rounded out the top five.

Racing action goes back green on Sunday with Time Trials at 3:00 and racing at 4:00 p.m.  For more information, visit www.Genesee-Speedway.com.