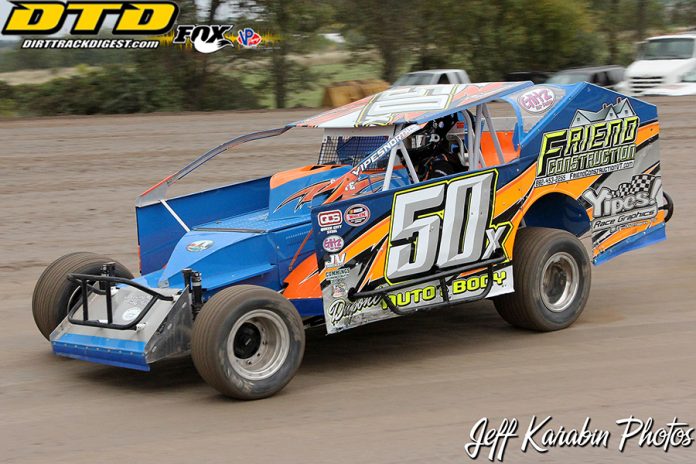 WEST HAVEN, VT –Devil’s Bowl Speedway went out in style for the 2019 dirt track racing season, with a year-end finale that became an instant classic. The Stove Depot Championship Finale had several unpredictable plot twists, and five drivers were officially crowned champions at an event that will be talked about all winter.

The father-and-son team of “Fireball” Joey Roberts and “Iceman” Evan Roberts topped the evening by collecting two feature wins, a pair of Rookie of the Year titles, and a track championship for 13-year-old Evan. Other drivers who came away with race wins included Marty Hutchins, Mark Norris, Jake Barrows, and Cory Gray, while championships went to Kenny Tremont Jr., Johnny Bruno, Scott FitzGerald, and Craig Kirby.

Joey Roberts took his victory in the 50-lap feature race for the headline Pepsi Sportsman Modified division. Roberts started on the pole position and fended off a challenge from Mike Fisher before breaking away after the first restart on lap 4. A long 38-lap run under the green flag allowed Roberts to build a big lead, but Justin Comes and Marty Kelly III reeled Roberts in. The final eight laps turned into a sensational battle with Adam Pierson joining the fight, and Roberts edged Comes by inches in the closest finish of the year – officially 0.001 seconds on the electronic scoring loop. The win was Roberts’ first in the top Sportsman class and sealed up his Rookie of the Year run.

Third-generation driver Johnny Bruno, 16, of Castleton, Vt., shocked the O’Reilly Auto Parts Limited Sportsman division by winning the championship in his first year in a Modified. James Hanson had held the point lead since June 30 with a perfect record of top-10 finishes during the year, but two spins in the final 30-lap feature erased Hanson’s 15-point lead and left Bruno in the catbird seat.

Poultney, Vt.’s Marty Hutchins ran a patient pace in the first half behind leader Austin Chaves, but he pounced at the halfway mark to take over the top spot and ran off with his second win of the year. Bruno held off Adam Piper for second with Anthony Warren – who was also a title contender – in fourth place. Anthony Ryan took fifth ahead of Chaves, Dave Snow, Austin Comes, Hanson, and first-time racer Tyler Ducharme.

Bruno took the title by just two points over Hanson, 749-747, with Warren a tight third at 742. Piper (714) and Matt Bilodeau (658) rounded out the top five in the point standings.
Benson, Vt.’s Mark Norris was ahead of the carnage in the Super Stock feature to take his third win of the season and secure the division’s Rookie of the Year title. The race was cut short from its scheduled 20-lap distance after a slew of multi-car wrecks dragged the event to more than 40 minutes in run time with just seven laps on the scoreboard. The race was called after a caution with 10 laps complete and Norris was named the winner. Chris Murray finished second, followed by Andrew FitzGerald, Garrett Given, and Bill Duprey.

Craig Kirby survived three major “uh-oh” moments in the 15-lap Mini Stock feature but recovered from each one to take his first championship. Kirby had a flat tire in one of the incidents and was forced to pit during the yellow flag, but had to rely on volunteer help to change the tire – Kirby and his grandfather are the only two members of his team – and he was able to get back on track with the assistance of a few crew members of other teams.
Middlebury, Vt.’s Jake Barrows ended up with his fourth win after post-race inspection; Barrows crossed the finish line third behind P.J. Bleau and Josh LaPorte, but Bleau’s car had an engine infraction and LaPorte had a tire violation and both were disqualified. T.J. Knight was moved up to a career-best second-place finish with Willie Rice third. Kirby was fourth and Jake Fountain was fifth in his first Devil’s Bowl start. Kirby edged Barrows for the title by 14 points, 801-787. David Sartwell-Cornell came out on top of a nine-car freshman class for Rookie of the Year.

Representing the fourth generation of his family to race – and win – Fletcher, Vt., youngster Evan Roberts dominated the 15-lap Friend Construction 500cc Mini Sprint race for his ninth win of the season, locking up both the championship and rookie honors. Roberts took the lead on the second lap and drove to a winning margin of nearly half a track. Kamden Duffy grabbed his third runner-up finish of the season with Kevin Smith third. Samantha Mulready was fourth and Shawn McPhee was fifth.

Roberts and McPhee entered the night just four points apart, but Roberts stretched out to a 13-point margin for the championship. Roberts is now the youngest champion in Devil’s Bowl Speedway’s 53-season history at 13 years, five months, and six days.

The Enduro Series brought the season to a close with a fun 50-lap race to end the event. The race stopped just once for a red flag when leader Kenny Torrey barrel-rolled his car with eight laps complete; he was uninjured. After the restart, Cory Gray, Brent Wilbur, Dakota Desabrais, and Chris Sumner battled hard for the lead, trading the top spot several times.

Gray and Wilbur broke away as others dropped out, and they crossed the finish line three-wide in lapped traffic with Gray squeaking out the win. Chris Lussier finished third as the last driver on the lead lap. Brian Blake and Scott Richner completed the top five, each one lap down.

Devil’s Bowl Speedway will honor its champions, top drivers, and special award winners at the annual Banquet of Champions on Saturday, January 25 at the Holiday Inn Rutland-Killington in Rutland, Vermont. More information will be announced soon.