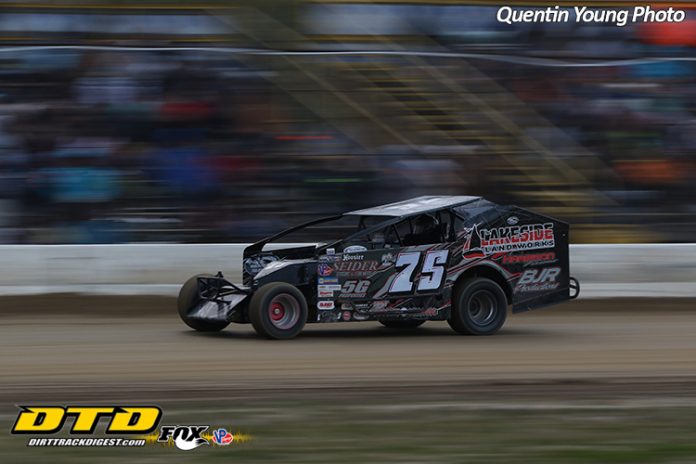 BATAVIA, NY – A cool and overcast fall afternoon presented a proper setting for the last race day of the 2019 season at Genesee Speedway, with a feel that was much like any other Saturday Night throughout the season, except for maybe the temperature. The A-Verdi Fall Finale had a very “standard show” feel with some invaders spicing things up. With weather on the way, the show moved along briskly to see the final three laps run under sprinkles and the final Victory Lane held in the rain.

The lone invader to put his car in Victory Lane was Chad Homan, who finally got the Genesee County Monkey off his back in the Late Model Feature. Homan, of Macedon, put on a show to win his heat race from sixth and charged up from the same starting spot to steal the lead away on lap 17 of the feature. On a restart on lap 21, however, it looked like all of his efforts were about to go out the window.

On the first restart with five laps remaining, Jimmy Johnson, who started back in 12th and had moved up to second, made a strong bid to the inside of Homan entering turn one. As the leaders transitioned to turn tow contact was made and Homan’s No. 91 began to spin, stacking up the field. Thankfully for Homan (and in effect Johnson) he was able to stay in the throttle and keep his car from looping around and drove away while cars further back spun to elicit a yellow flag. On the next restart, Homan knew what he had to do.

“I wasn’t real happy when (Johnson) got to the inside of me on that restart, so on the next restart I got down low and made it as wide as I could,” stated Homan.

Early in the race, as Homan and Johnson were moving up, Jon Rivers and Doug Ricotta were battling out in front for the lead. After Rivers spun on lap six while running in second, Tim Schram threw his name into the ranks as made a power move to drive from fourth to first on lap seven. Another caution would quickly come out which saw Schram choose the bottom line for the restart, which was exactly what Ricotta needed to get back out front. Ricotta then had to deal with Homan and Johnson who had caught him just after halfway. On lap 14, Johnson threw his No. 39J in deep to turn three and made soft contact to avoid a crash. Two laps later Chad Homan took the lead from Ricotta just before a caution flag appeared.

As Homan drove away after the final restart to the checkered flag falling along with the rain, Johnson held off Champion JJ Mazur for second. Scott Waters rallied from an opening lap spin to finish fourth while Doug Ricotta rounded out the top five.

AJ Custodi has had two seasons of strong performances in Sportsman action, but until Saturday Afternoon had yet to breakthrough with a trip to Victory Lane despite coming close on a number of occasions. He saw his opportunity on a lap three restart to jump in front of his buddy Cameron Tuttle and once he got in front never looked back as he drove away for a convincing victory.

Custodi, of Ransomville, became the ninth different driver to win a Sportsman even at Genesee on 2019, helping to put a cap on his sixth place point effort. His No. 75 was able to work down off the bottom of turn four to power down the straightaways where many others failed to find bite.

“I just put the car where it was going to be best and hope it worked,” admitted Custodi after the race. “I saw (the flagger) showing me I had a comfortable lead I just was worried how lapped traffic would play out.”

With the final 17 laps of the feature running off green, Custodi had nearly a three-second margin over Tuttle when he reeled in the back of the field with under five laps remaining, allowing him enough of a cushion to win by 1.3 seconds. Tuttle would hang on for second with James Michael Friesen driving up to third. Ricky Newton and Byron Dewitt rounded out the top five.

Josh Pangrazio finished the Street Stock season with his 11th win of the year with his fifth straight win in the 20-lap feature. Pangrazio took the lead from Colton Chappius coming to complete lap three and appeared as if he was going to walk away, but it was far from that easy. Coming to complete lap eight, Pangrazio got caught up in lapped traffic, which allowed John Zimmerman to move by momentarily. As the duo reached turn one, the caution flag appeared for the first time which gave Pangrazio lead back as he was just .011 seconds ahead the last time they had crossed the finish line. The second half of the race would see a handful of restarts and while Zimmerman never let the 2019 Track Champion run away, Pangrazio was too strong and held on to win. Zimmerman would settle for second with Kurt Stebbins, Adam DePuy and Gene Sharpsteen rounding out a strong top five.

Dante Mancuso put on a performance to ride the rim and keep the momentum up in his mini stock to win their 15-lap feature. Mancuso, of Batavia, took the lead coming to complete lap 13 from Brad Whiteside after chasing him down on the top for a handful of the laps. The duo inherited the top two spots on lap eight when leader Eric Weis slid over the banking in turns three and four and slid back three spots. It was the second win of the year for Mancuso, who had won four races ago in August. Whitside was second with James Gayton tying his season-best in third. Chris Leone and Ashley Blech rounded out the top five.

The Bandit race saw Jake Bansmer score his fourth win of the year as he led wire-to-wire to win the 10-lap event. Bansmer ran away to put an exclamation point on his first season in the division. Tierney White won the heat and came home in second with Tyler Guzzardi rounding out the podium.

The only event left on the 2019 calendar will be on Saturday, December 14 for the Genesee Speedway Awards Banquet. The 2020 season is already starting to pick up some juice as well with the Inaugural Appearance by the World of Outlaws Late Models announced earlier this week for Friday, June 19th. For more information visit www.Genesee-Speedway.com.