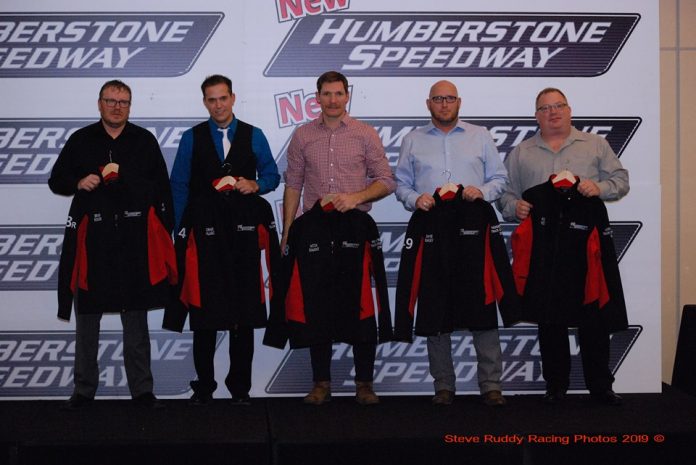 NIAGARA FALLS, ONT – The New Humberstone Speedway officially closed the books on the 2019 season with the annual Night of Champions Awards Banquet at the Americana Resort. The celebration was honoring the accomplishments of the drivers and teams that call New Humberstone home each race night. Point fund monies and trophies were distributed to drivers competing in the Epic Racewear Weekly Racing Series.

2019 Mini Stock track champion Craig Vlasic was named the Trevor Wilkens Driver of the Year. The Jim Simpson Crew of the Year Award went to Triple J Motorsports for their efforts on Greg Panunte’s DIRTcar Sportsman. David and Wendy Bitner were the recipients of the Pete Cosco Dedication Award. Richard & Eileen Lee, Helen & Bob Smith, Debbie Ferri, and Mark Armstrong were the recipients of the Key Player Award.

Evan Curtis received the championship trophy in the inaugural King of the 4’s. Curtis had strong, consistent finishes in the three races that put the Mini Stocks and Pro 4 Trucks racing together. Dave Bailey received the championship trophy for the Can-Am Thunderstock Challenge. In a four-race mini-series between Humberstone and Ransomville Speedway, Bailey won three races, including both events at Humberstone, and the John Susice Memorial at Ransomville.

Speedway President and Promoter Dave Bitner Jr spoke to the crowd about the upcoming plans for 2020.It was announced that the Weekly Racing Series Championships will be renamed to the Club 54 Weekly Racing Series Championships. With the new sponsorship from Club 54, all drivers will receive FREE entry for every regular Sunday night racing program in 2020. Regardless if you run one week, or 15, all drivers will receive FREE entry for the season. Early plans for 2020 include the second year of the Can-Am Thunderstock Challenge in partnership with Ransomville Speedway. 2020 will also see the debut of the Can-Am Sportsman Challenge between Humberstone and Freedom Motorsports Park in efforts to build the Sportsman Modified division at the Western New York oval. It was also announced that Humberstone will host a Canada Day of Destruction on July 1. A 100 lap Enduro will be featured plus many other events. The 2020 season will begin with the annual Dawn of Destruction. The annual car shows at Pen Centre and Seaway Mall will also be back prior to the start of the season.

Look for updates on the tracks social media pages throughout the winter months to build anticipation for the 2020 season. 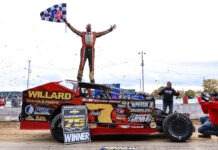