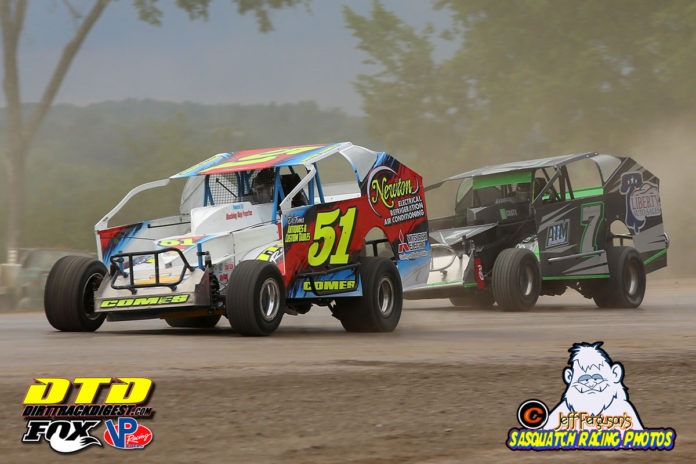 WEST HAVEN, VT – Devil’s Bowl Speedway is about to become an extraordinarily busy place. A new makeup date for last weekend’s rainout has created a doubleheader on August 29-30, which will now serve as a preview for the Interstate All Battery Center Vermont 200 on Labor Day Weekend.

The slate of action opens this Saturday, August 29 at 7:00 p.m. with the always entertaining Enduro Series going out for 50 wild-and-crazy laps of action. Four of Devil’s Bowl’s weekly divisions will also be on the card, highlighted by a “Win & You’re In!” Sportsman Modified feature, in which the winner will take home $1,200 and a guaranteed starting position in the Vermont 200.

Saturday will also see an extra-distance 25-lap feature for the O’Reilly Auto Parts Limited Sportsman class paying $400 to win. The Mini Stock and Friend Construction 500cc Mini Sprint divisions are also part of the program, while the Super Stocks are off on Saturday night.

Racing picks right back up on Sunday, August 30 with an early 6:00 p.m. start time, as the “Charlie LaDuc Memorial” event rained out last Sunday will be made up in its entirety. The Sportsman class will run for 54 laps and $1,500 to win, in the final long-distance tune-up for the Vermont 200. The rest of the weekly divisions will also be in action including the Super Stocks.

To sweeten the pot, Devil’s Bowl Speedway promoter Mike Bruno has announced a $1,300 bonus if a driver is able to sweep the weekend feature wins in the Pepsi Sportsman Modifieds, to bring the weekend total to $4,000. In addition, Sportsman “B-Feature” races for non-qualifiers have seen an increase in payout for both nights with $250 going to the winner, $125 to the runner-up, $100 to the third-place finisher, and $75 for all others.

There will also be random draws to reward drivers in the Sportsman Modified and Limited Sportsman divisions with free Hoosier Racing Tires. The Sportsman Modified feature winner will draw two random Hoosier winners each night, and the winners of the Sportsman B-Feature and Limited Sportsman feature will each draw one Hoosier winner each night.
Spectator Grandstand tickets, Infield Drive-In tickets, and Pit Pass wristbands from the August 23 rainout – including online pre-sale tickets and those purchased at the speedway – will be honored on either Saturday or Sunday this weekend, or also on Saturday, September 12. Spectators and competitors are asked to keep ticket stubs, online receipts, and wristbands for entrance at one of those events. Temporary, one-day competition licenses purchased on August 23 will be honored at the driver’s next attended event.

Advance sale tickets will soon be available online, and Vermont State COVID-19 pandemic guidelines remain in place. Grandstand seats are $15 (all ages) and Infield Drive-In tickets are $20, with kids age 12 and under free in the infield. Tickets are for sale through the Devil’s Bowl Speedway website (processing fees apply), or at the speedway on race night while they last.

The Interstate All Battery Center Vermont 200 will be on Saturday, September 5 and Sunday, September 6, with racing at 5:00 p.m. on both nights. Tickets and information for that event will be announced soon.