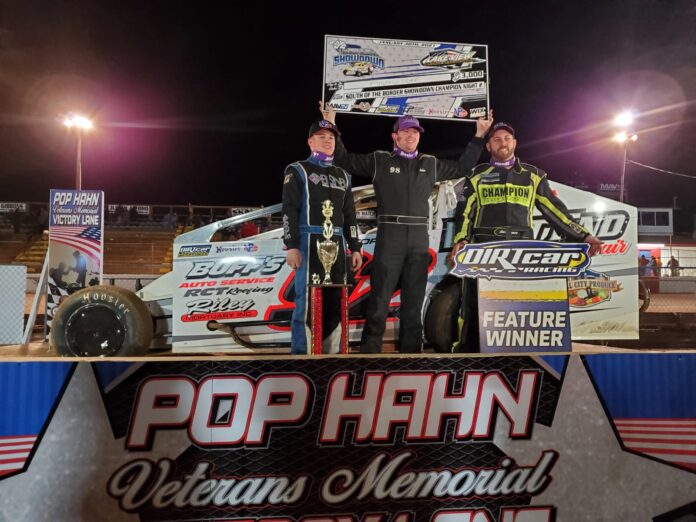 LAKE VIEW, SC – The gloves were off in South Carolina as the DIRTcar Sportsman Modifieds battled for 51 laps at Lake View Motor Speedway. Andrew Buff, from Lathan, NY, improved on Friday night’s second-place result to win the $3,000 South of the Border Showdown prize over Lake View’s inaugural Sportsman Modified winner Nick Guererri. Justin Buff charged up through the field from 20th to score his second podium in two days.

Doubling up on the podium was even sweeter for the Buff family.

“This is all for my grandfather,” said Andrew Buff. “ We lost him two weeks ago due to an illness and he was dedicated to everything for us. He was here with us and we performed for him.”

Starting third, Andrew Buff in his #92 DIRTcar Sportsman Modified, saw an opportunity on the first lap when the front row of Grant Hilfiger and Willie Milliken washed up the track in turn one. The caution waved and Hilfiger pulled his car off the track. With one lap on record, Buff retained the lead.

After surviving a slew of restarts, Andrew Buff crossed the line in first place which earned him $3,000 plus bonuses.

“This is awesome. We made the right tire choice tonight with all the cautions. It paid off,” he said.

The battles at the front were intense throughout the race. Kevin Root moved his way up to second around the halfway point but on a restart Kevin Root, Nick Guererri, and Justin Buff touched wheels going into turn three and the #34 of Root was sent spinning in front of the field. Several cars piled in and Root’s night was cut short.

“It was tough,” Nick Guererri said. “Everyone was fighting for the same spots.”

The battle for the podium raged until the checkered flag. Guererri could not find a way around the #92 of Buff.

“Buff was good in the middle,” Guererri noted. “He could roll the middle a little bit better than I could. I was a little bit tight. I don’t know what we could have done to loosen it up.”

“It was a long race,” said Justin Buff. “I  got tired towards the end with all the yellows. We started 20th so I had to work for it. We broke a rear axle in Time Trials. That set me back the whole night but we never gave up and here we are on the podium.”

Going from a broken axle in Time Trials to a podium finish is the ultimate definition of a hard charger.

Stay tuned to DIRTcar.com for upcoming schedule releases for the DIRTcar Sportsman Modifieds, DIRTcar 358 Modifieds, and the DIRTcar Pro Stocks. Follow us on Twitter and Facebook for news, photos, videos, and more. 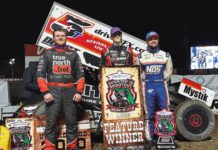