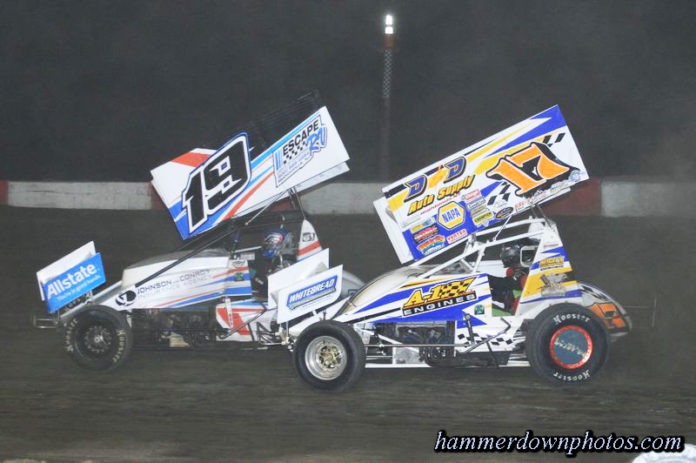 The 2016 motorsports season has all but officially come to a close. Fans and teams at all levels of our sport have witnessed an ultra-competitive year. Whether it was NASCAR, The World of Outlaws, Indy Car Series, Lucas Oil Late Models, or even the Patiort Sprint Tour, we were all treated to some intense competition across the United States. The CRSA Sprint Car Tour would be no exception to this standard. It was a phenomenal year for the traveling open-wheeled organization.

The tour, featuring the 305 Winged RaceSaver® Sprint Cars, competed in 20 events out of a total 26 scheduled at 10 different speedways across New York and a Northeastern Pennsylvania.

Associate Sponsorship was provided by Casey’s Truck Salvage, CNY Powersports & Kawasaki, Einstein Construction Group, ProFab Enterprises, & Shuttleworth Asphalt Sealing.
CRSA Sprints would like to thank all of the sponsors and contributors to the 2016 season for the awesome support.

A total of 55 different drivers made the haul to the track to compete in at least one CRSA event in 2016. An astounding 10 different “A” Main winners enjoyed at least one trip to victory lane out of those teams.

Kyle Smith, of South Egremont Massachusetts, will be crowned the 2016 CRSA Sprint Tour Champion, his second consecutive crowning. Smith piloted the D and D Auto Supply Matrafailo owned number 17 to a total of 3 wins, 12 top 5 finishes, and 18 top ten finishes. The previous year’s accomplishments were in his family owned mount. Brett Jaycox proved that consistency can pay off with a 2nd place points result. Emily VanInwegen solidified 3rd place and picked up 1 ‘A” main win along the way. Dana Wagner in his 25w was consistently in the top 10 for a 4th place showing. Rounding out the top 5 after leading much of the season point standings, Eddie Strada never could recover the point lead after missing a single race. Eddie collected the most wins, totaling 4 on the season.

The balance of the top 12, who will be receiving cash awards at the January 28th banquet, were Dalton Herrick, Rookie of the Year Sydney Prince, Josh Flint, Brian Krummel, Tyler Jashembowski, Scott Goodrich, and Thomas Radivoy.