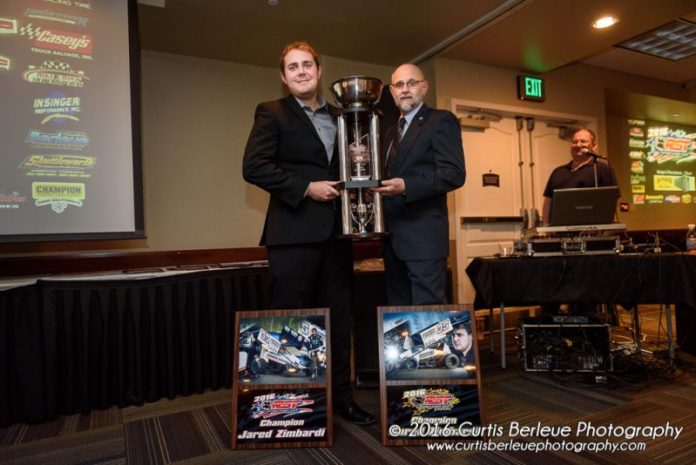 ROCHESTER, NY – The Patriot Sprint Tour awards banquet was held at the Staybridge Suites on the Genesee River in Rochester, NY this past Saturday where Jared Zimbardi took home nearly $10,000 cash for his banner season in 2016 scoring five American Series wins and three Canadian Series wins.

The series paid out an incredible $35,000 in cash to 23 different drivers thanking them for their support of yet another fantastic 2016 season.

Multiple special awards were also given away throughout the night. Steve Glover was honored for best appearing car. The team of Scott and Dave Just took home the Patriot of the year for their never give up attitude as well as the hard luck award. Paul Habeck took home the sportsmanship award, while Tony DiFonzo received the Mechanic of the year award. Kyle Drum was rewarded with a check and plaque for the just missed the points award finishing 13th in 2016 despite his two series wins on the tour.

Pete Richardson was the recipient of the ‘worst draw’ award where he had an average draw of 35.29 that was recorded during the entire 2016 season.

The dedication to Motorsports award went to Curtis Berleue for his extremely hard work and dedication in his first year as the series photographer and graphic designer for the 2016 season.

Patriot Sprint Tour President, Mike Emhof, ended the evening with a special thank you to all the marketing partners, sponsors, and teams who supported the series in 2016. Mike stated, “It is with the support of our wonderful marketing partners that continue to increase their contributions and make the series grow into one of the top run racing organizations in the region”.

He also called up his entire staff making it known that none of this would be possible without each and every one of them.

The series also paid tribute to Jerry Farrell, who is retiring from his duties as Pit Steward after ten years of excellent service.

Emhof ended the night with minor changes to the 2016 season that will be made and should be on the lookout for them during the off season for a possible big announcement for a huge race weekend at Race Tracks that the Patriot Sprint Tour have never been too.