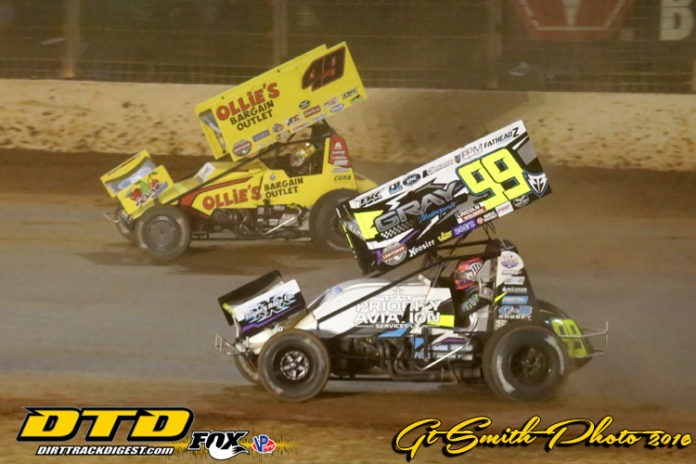 PARK City, KA — Tickets are now on sale for the Kansas Outlaw Klassic, featuring the World of Outlaws Craftsman Sprint Car Series at 81 Speedway in Park City, Kansas on Saturday, May 6 and can be purchased online at slspromotions.ticketforce.com or by calling SLS Promotions at 815-344-2023.

Donny Schatz, the eight-time and defending World of Outlaws Craftsman Sprint Car Series champion, won in the series last visit to 81 Speedway in 2006, which was the same year he won his first title. Schatz started on the outside of the front row in the that race and took the lead from Terry McCarl on the sixth circuit and led the rest of the 30-lapper to score his first win at 81 Speedway. Daryn Pittman, the 2013 World of Outlaws Craftsman Sprint Car Series champion, is also a past winner at the track, which is located just outside of Wichita.

Battling Schatz and Pittman in 2017 is a talented group of full-time competitors including David Gravel, who had nine wins last season, Brad Sweet, who was fourth in points in 2016, Joey Saldana, who had five wins last season and Shane Stewart, who picked up eight A-Feature wins for the Larson Marks team last year.

Jason Johnson, the 2016 Knoxville Nationals winner is back for his third full season with the World of Outlaws Craftsman Sprint Car Series in 2017, while longtime fan favorite Jason Sides will hit the road for another season, along with veteran driver Paul McMahan and reigning Kevin Gobrecht Rookie of the Year Award winner Greg Wilson.

A trio of up-and-coming young drivers are set to compete with the Outlaws in 2017, led by Logan Schuchart, who won twice in 2016, his Shark Racing teammate Jacob Allen and teenager Clyde Knipp from Missouri. Rookie contender Brent Marks from Pennsylvania will hit the road full-time for the first time in his career this coming season.

Tickets for the Kansas Outlaw Klassic, featuring the World of Outlaws Craftsman Sprint Car Series at 81 Speedway in Kansas on Saturday, May 6 can purchased online at slspromotions.ticketforce.com or by calling: 815-344-2023.