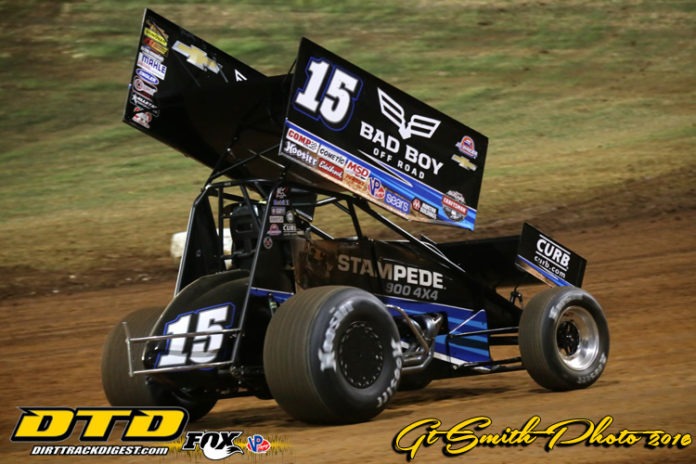 CONCORD, NC – The World of Outlaws Craftsman® Sprint Car Series is on the brink of its 40th season, and the series drivers regroup from the offseason to compete on sprint car racing’s most storied tour. Some 13 full-time drivers will herd their 900-horses to every end of the compass nationwide in 2017, seeking to either build on their existing legacy or make their tracks.

Last season, most of the tracks were up for grabs as 10 full-time drivers took the checkers at least once. Early on, Kasey Kahne Racing proved its dominance in the state of Texas. Daryn Pittman and Brad Sweet were the lone-stars for the series’ first swing through the state, splitting victories at Cotton Bowl Speedway and Royal Purple Speedway. But it was series veterans Joey Saldana and Larson Marks Racing’s Shane Stewart who ended their Texas tirade with wins at Devil’s Bowl Speedway. In 2017, Gator Motorplex will host the series for the first time and the series will return to LoneStar Speedway for the first time in six years; these two tracks will replace the ones where Kasey Kahne Racing saw success, potentially releveling the playing field.

Tony Stewart Racing’s Donny Schatz – the series’ eight-time champion – has consistently defended his home state of North Dakota. Specifically at River Cities Speedway, one of his most beloved tracks, Schatz swept 2016. Not only that, but Schatz has also taken six of the last eight races there since 2013. The Outlaws have visited the 3/10th-mile course 19 times since 2007, giving Schatz a 42 percent success rate at a track that has two midseason races in 2017. Schatz claimed 56 series races in two years, nearly one-quarter of his 229 career wins with the series.

When it comes to career success, Saldana is one win shy of becoming the sixth driver in series history to hit the 100-win mark. The 1996 Kevin Gobrecht Rookie of the Year solidified himself as one of the series’ best in his 19 seasons full-time, ranking in the top-five in four of the last five seasons. In 2016 his victories were dispersed through five different states of the 24 the series visited – nearly double his mark from the season before. With a new team, Saldana said he is hopeful that he will be able to contend with the Kasey Kahne, Tony Stewart and Larson Marks Racing teams.

In a group of experienced drivers, there are several young-bucks who are trying to establish their dominance within the series. CJB Motorsports driver David Gravel, who finished third in points, completed his first full season with one team. Gravel improved on a winless 2015 season, taking nine more checkered flags and earning 36 more top-five performances. Shark Racing’s tandem of Logan Schuchart and Jacob Allen also drew their first blood, amassing two wins and 22 top-five performances between them last season.
The stable of full-time drivers is a select breed on the charge for a championship. Considering each driver’s trends from past seasons, some of sprint car racing’s most proven experts weigh-in on 2017:

Chris Dolack, SPEED SPORT News: “This may sound a little weird – and I’m not even a big basketball fan, although I like to play it – but I look at Donny Schatz as the Chicago Bulls’ Michael Jordan. When I lived in Chicago, they were dominant. It’s ‘Michael Jordan’ until somebody knocks him off. That’s always the way I felt about Schatz. It’s ‘Donny Schatz’ until somebody can knock him off. Now, there are definitely guys that can do it. An interesting thing that Schatz told me over the winter was he’s got four former crew members who are now crew chiefs on other teams. So in essence, he’s racing against his own notebook in all odd cases. That stuck with me. Until someone is able to step up and consistently do what he does, I don’t see him or his crew stumbling.”

Brad Doty, 2001 National Sprint Car Hall of Fame Inductee: “I have to lean toward Daryn Pittman being the biggest threat for a championship. Even though he does have a new crew chief [Eric Prutzman], he’s with the same team. Joey Saldana has been out there for a long time, but he’s with a new team. [David] Gravel: same team, same crew chief, and he looked good last year. If they can put the consistency together to win a championship, they would be a threat. But I have to lean more toward Pittman because he’s already been a champion with that team – even with a new crew chief. Pittman is the biggest threat out of anybody to beat Donny Schatz, Ricky Warner and the Tony Stewart Racing team. [Tony Stewart Racing] has been together for so long with the same equipment. They just keep fine-tuning it year-after-year. They are still the team to beat.”

Jeremy Elliot, SprintCarUnlimited.com: “Donny Schatz is the clear favorite to win his ninth World of Outlaws title in 2017. Few, if any competitor, can match his intensity throughout the season. He has the ability to drive through traffic and win from anywhere on the starting grid. Right now, Schatz has no equal in the sport, and he will prove that again this season. Contenders: David Gravel could be the biggest contender for Schatz this season. CJB Motorsports has cut back to one team and will be able to focus all their efforts into Gravel’s pursuit of a World of Outlaws title.”

Ross Wece, Open Red Commentator: “You can’t talk about a new World of Outlaws season without talking about Donny Schatz. It’s one of those scenarios where he is the guy to beat, until someone can step up and beat him. I also look forward to seeing what the new driver/crew chief combos at Kasey Kahne Racing and Larson Marks Racing can produce for those teams respectively. Also keep an eye on Joey Saldana, Tyler Swank, and the newly formed Stenhouse Jr-Wood Racing team in 2017. Tyler and Joey got some races together in the second half of 2016 and could be a force this year. Throw in the addition of series newcomer Brent Marks and the 2017 season is shaping up with several fascinating storylines.”