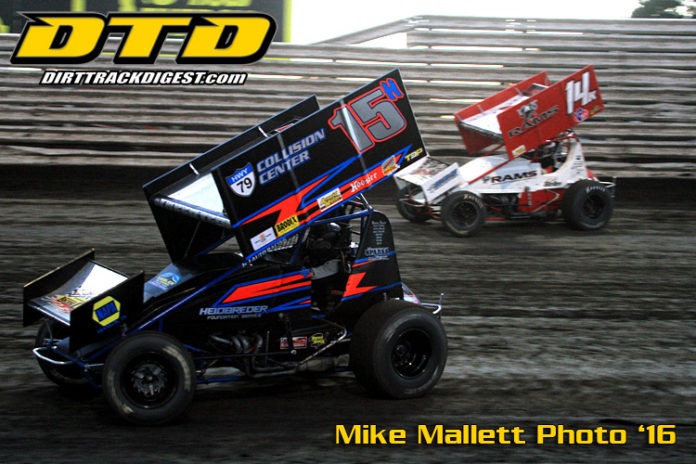 TULSA, OK – Registration for drivers and crew members wanting to be members of the American Sprint Car Series in 2017 has opened. The membership carries a supplemental insurance that helps to cover incidents that may occur at an ASCS sanctioned event.

Driver’s looking to be eligible for point fund and contingencies must be a member in good standing. Memberships will be accepted through June 1, 2017. The membership also guarantees that a member cannot be charged more than $30 per night for a Pit Pass. Drivers who are not wanting to run for point fund are not obligated to join. It is simply an option.
From the 2017 Rules of the American Sprint Car Series regarding National Tour eligibility of members to receive point fund and contingencies:

“Drivers who compete in at least 95% of a given season’s schedule on the Lucas Oil ASCS National Tour, finish in the Top 15, and is a member in good standing, is eligible for their earned position’s full payout. Participation between 80% and 94.99% by a driver in good standing will be paid for the percentage of races run. For example, if a driver finishes 11th but only runs 82% of the season, their point fund will be 82% of that position’s scheduled payout. Drivers must run between 80% and 100% of a season to be eligible for contingencies, or be considered for Rookie of the Year.”

On the Regional level, drivers must compete in 70% of a given season’s lineup.
Driver Memberships are $150 for the year. Crew is $100. Anyone racing is strongly advised to also purchase insurance through S.T.I.D.A. This provides coverage regardless of sanction and is discounted if you are an ASCS member. The membership form is online at http://www.ascsracing.com/downloads/get.aspx?i=45950 or call 1-800-378-4608.
Membership can be completed via the online portal at https://www.myracepass.com/register/?n=10044 or teams can download the forms at http://www.ascsracing.com/series-info/rules.aspx.

Memberships and payment can also be turned into Series Directors.
Complete series rules can be found online at http://www.ascsracing.com/series-info/rules.aspx. The same link also contains the current driver/crew registration forms.
The 2017 season marks the 26th year of sanctioning Sprint Car racing across the United States for the American Sprint Car Series. The 2017 season will see over 140 dates across ASCS National and Regional lineups.

For continued updates on the American Sprint Car Series, log onto http://www.ascsracing.com.