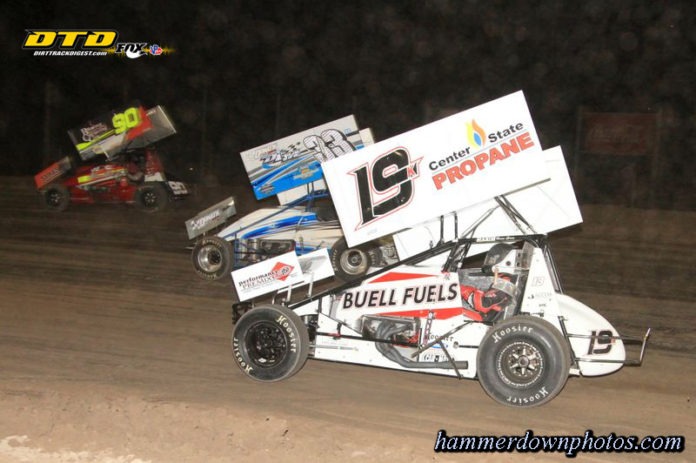 SYRACUSE, NY – As the 2017 racing season rapidly approaches, the Empire Super Sprints (ESS) is proud to once again announce Lucas Oil as the presenting sponsor for the entire tour. The Lucas Oil Empire Super Sprints is getting ready to put on another exciting year of 360 winged sprint car action in the northeastern United States and Canada.

It will be slogan 35/10! This year marks the 35th season of ESS and also the 10th season with Lucas Oil backing the tour. ESS has grown to be the one of the leading 360 sanctioning bodies on the US and with the dedicated support from Lucas Oil boasted a $50,000 cash point fund on 2016.

“Lucas Oil is not just our tour sponsor, after 10 years they are really like family to us,” noted ESS President Chuck Miller. “With their support, ESS has been able to keep on growing in the years where local dirt track racing has seen some tough times. In return, teams have come out in strong numbers as we have been able to spread the nightly payouts and also point funds from top to bottom to help as many teams as we can.”

Forrest and Charlotte started Lucas Oil Products with the simple philosophy of producing only the best line of lubricants and additives available anywhere. Since its inception, Lucas has steadfastly adhered to this corporate objective. Through innovative product research and development, along with aggressive marketing programs, Lucas has established itself as a top selling additive line in the American truck stop industry.

Lucas is also one of the fastest growing additive lines in the consumer automotive industry. A premium line of oils, greases and problem solving additives has helped to firmly establish Lucas as a prominent figure in this marketplace.

All these stars along with Chuck Hebing, Jeff Cook, Shawn Donath, Chad Miller, Dave Axton, Paulie Colagiovanni, Danny Varin, Matt Billings, Dave Axton, Brandon Kidd, Jonathan Preston, Pete Richardson and many more will be out in force to put on some exciting action for the fans in 2017.

The Lucas Oil ESS Tour 2017 will do its annual kick off on April 8th as the Selinsgrove Speedway for the Spring Showdown which pays $2,500 to win. While non-points, several ESS stars will be on hand to get some laps on the famed half-mile where they return for a full points event in May.

After Selinsgrove, the tour officially kicks off at the Outlaw Speedway on Friday night Apr. 21 with the first point event which starts the battle for ESS’ 35th season champ. The ESS sanctioned event will boast one of the largest purses on the tour for full points with $3,000 going to the winner and $300 to take the green.

The 2017 season will be slogan 35/10! Two milestones for two well recognized entities of 360 sprint car racing! And for those 35 years, the tradition continues of excitement guaranteed!