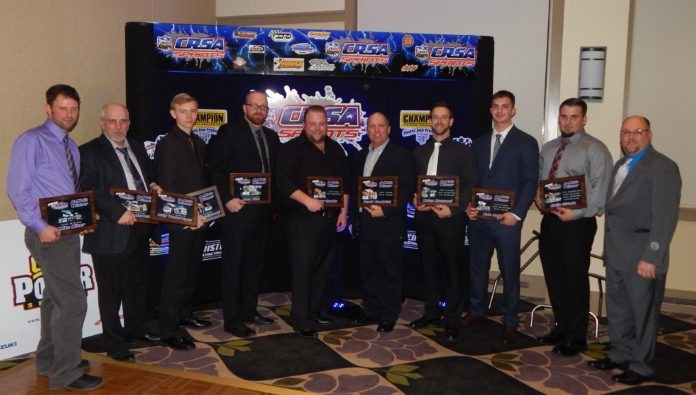 SODUS, NY – The 2016 CRSA Sprints season concluded with the annual awards banquet this past Saturday night at the Vernon Downs Casino where a series record $10,850 in cash along with awards was distributed to drivers for their achievements. Receiving cash awards were the top 12 in tour points, all “A” Main winners, the 2016 Rookie of the Year, and each of the top three finishers in the Kennedy’s ‘Northway 90’ series, E&H Services, LLC Southern Tier Challenge, and the I-88 Speedway/Algonkin Motel Challenge Series.

Through the support of great marketing partners Kennedy’s Towing & Service, E&H Services, LLC. With Mike Emhof Motorsports, Inc., and The I-88 Speedway/Algonkin Motel, drivers were able to compete in three ‘mini series’ throughout the season. The top three drivers in each series were recognized for their efforts at the banquet.

In E&H Services, LLC. Southern Tier Challenge competition, Scott Goodrich had an average finish of 5.1 making him the series champion worth $300. Emily VanInwegen took the win at Five Mile Point Speedway on June 18th and came away 2nd overall in the series, earning $200. Brett Jaycox rounded out the top 3, receiving $100.

Many special awards were handed out throughout the night as well. Sydney Prince finished 7th in overall points and scored 3 top 10’s in her first season of racing full-size cars, and was awarded Rookie of the Year honors worth $250. Other awards being distributed included the M&W / Panther Frameworx Hard Luck award (Art Kiser Racing), Best Appearing Car (Sydney Prince), PowderTech Hard Charger (Brett Jaycox), Mechanic of the Year (Russ Flint), Sportsmanship award (Josh Flint), Perseverance award (Dana Wagner), and the Dedication to CRSA award (John Matrafailo). A special award for Dedication and Service to CRSA was also presented to long-time series flagman and official Ken Marshall, who has decided to retire after the 2016 season.

Be sure to follow along this off season at www.crsasprintcars.com, along with CRSA Sprints on Facebook and @CRSASprints on Twitter for announcements on the upcoming 2017 season!