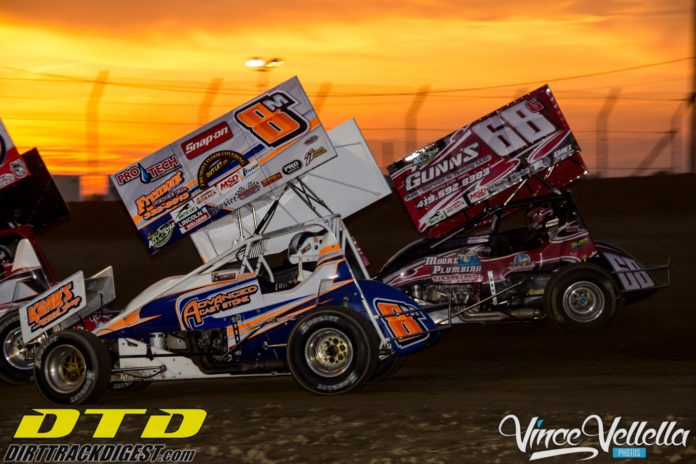 INDIANAPOLIS, IN – The Arctic Cat All Star Circuit of Champions will launch the 2017 season in near-record fashion; welcoming 18 full-time travelers from five different states, each working to endure 51 events across much of the Midwest and Northeast. Of the 18 confirmed travelers, 11 will tackle the nine month campaign for the first time in their careers, attempting to etch their names permanently in the All Star history books and claim “Rookie of the Year” honors with one of America’s oldest and most prestigious traveling sprint car series.
Despite the heavy, rookie presence invading the tour, it is the talented, veteran roster of travelers that aim to conquer headlines once again in 2017, led by five-time and defending Arctic Cat All Star champion Chad Kemenah. Kemenah, who claimed the 2016 championship by a mere-20 markers over fellow Ohio native Dale Blaney, earned one feature victory last season, using relentless consistency to claim 33 top-ten feature finishes in 43 contested starts. The Findlay native will return to the driver seat of the familiar Hunter Racing/Seneca Energy/No. 10H in 2017, aiming to score a second-ever title for car owner Rob Hunter.
Other experienced travelers returning to the road full-time in 2017 include Pennsylvania native and 2015 Jim Ford Classic winner Ryan Smith; former USAC Kenyon Midget champion Caleb Armstrong; Findlay, Ohio, native Caleb Helms; 2005 Knoxville Nationals champion and son of 20-time World of Outlaws champion, Kraig Kinser; the 2016 All Star “Rookie of the Year” runner-up, the “Texas Traveler” T.J. Michael; and Etters, Pennsylvania, native Bradley Howard.
In perhaps what will turn into the largest rookie battle in Arctic Cat All Star history, the contingent of newly formed All Stars is diverse; representing a multitude of tracks, series and divisions from across the country. Although some competitors have limited or part-time experience with the Arctic Cat All Star Circuit of Champions, some will compete for the first-time ever in 2017.

Joining Ryan Smith and Bradley Howard, seven of the 11 “Rookie of the Year” candidates hail from various parts of the Keystone State, each attempting to extend a rich, Pennsylvania presence on the road with the Arctic Cat All Star Circuit of Champions. Former Lernerville Speedway champion and Buckeye Outlaw Sprint Series (B.O.S.S.) non-wing ace Brandon Spithaler; the father-son duo of Brent and Brandon Matus; former Lernerville Speedway super late model runner-up turned open-wheel competitor John Garvin; 358ci sprint car graduate Tyler Esh; and the third generation family duo of Hunter and Jordan Mackison, will each represent Pennsylvania in 2017.
In addition, Ryan Linder, a Mexico, Indiana, native who will compete out of a Pennsylvania-based race shop; Dane Lorenc, a New York native and former Patriot Sprint Tour feature winner; “Mad Max” Stambaugh, an Elida, Ohio, native who claimed back-to-back NRA “360” Sprint Invaders championship runner-up finishes; and Clyde, Ohio’s Roger Campbell, the most recent to add his name to the rookie list, will also follow the Arctic Cat All Star trail in 2017, raising the total number of states represented to four within the “Rookie of the Year” chase.
The 2017 Arctic Cat All Star Circuit of Champions campaign will ignite officially on Thursday, Friday and Saturday, February 9-11, with three, full nights of Winter Nationals competition at the Bubba Raceway Park near Ocala, Florida. All three events will award a $5,000 top prize, as well as full points toward the 2017 Arctic Cat All Star championship. The upcoming visits will bring “America’s Series” within close proximity of 30 total appearances at the Ocala-based oval since traveling commenced in 1970; recording 25 starts since February of 1991.
With Mother Nature claiming control during most of the Ocala visit in 2016, Kraig Kinser left Florida as the only victor during competition at Bubba Raceway Park. The Bloomington, Indiana, native held off Dale Blaney and Greg Hodnett for the highest spot on the podium. It was Kinser’s first of two All Star victories in 2016.
Those seeking additional information regarding the 6th Annual Winter Nationals at Bubba Raceway Park should visit the facility live on the Web at www.bubbaracewaypark.com. Updated news and content regarding the event will also be shared on all of the available social media networks.
Additional Arctic Cat All Star Series Info:

All Star Enterprises, LLC, wholly owned by Tony Stewart, d/b/a the All Star Circuit of Champions, is a winged sprint car series. The All-Star Circuit of Champions Sprint Car Series is one of the oldest traveling 410 sprint car organizations and is a staple of grassroots, open-wheel racing. Formed in 1970 by Bud Miller, the series has largely been considered the first ‘outlaw’ Sprint Car organization of the modern era. After a 10 year stint as owner of the All Stars, Miller passed control of the series to Bert Emick in 1980; a reign that would continue through 2002. Guy Webb then purchased the series from Emick in the summer of 2002 and served as the series President for the next 12 years. Motorsports entrepreneur Tony Stewart agreed to terms with Guy Webb to become the sole owner of the original winged sprint car tour in January of 2015.
About Arctic Cat:

The Arctic Cat brand is among the most widely recognized and respected in the recreational vehicle industry. The company designs, engineers, manufactures and markets all-terrain vehicles (ATVs), side-by-sides and snowmobiles, in addition to related parts, garments and accessories under the Arctic Cat® and Motorfist® brand names. Arctic Cat Inc.’s world headquarters is located in Minneapolis, Minnesota. Its common stock is traded on the NASDAQ Global Select Market under the ticker symbol “ACAT.” More information about Arctic Cat and its products is available at www.ArcticCat.com.