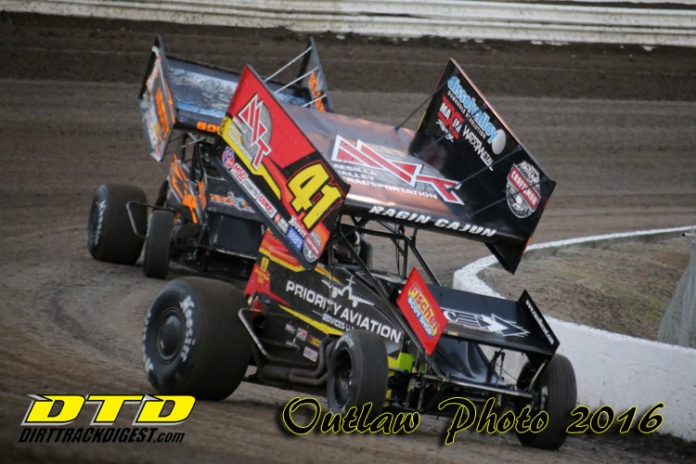 CONCORD, NC – The World of Outlaws Craftsman® Sprint Car Series will continue its annual tradition of heading westward for several nights of racing. The 2017 Kick-off Tour features 11 stops across four states – Arizona, California, Nevada and Texas.
Two of the three tracks making debuts on the national tour this season are in the west coast swing (Gator Motorplex and Cocopah Speedway). Gator (Tex.) Motorplex features a quarter-mile bullring; Cocopah (Ariz.) Speedway is a semi-banked, 3/8-mile oval. Arizona Speedway will be making its second appearance on the schedule.

“We always look forward to this stretch in our schedule,” said Series Director Carlton Reimers. “The opportunity to extend our series coast to coast makes it easier for fans nationwide to enjoy ‘The Greatest Show on Dirt.'”

The Outlaws will return to the East after making a stop at one of the series’ most historic tracks. Devil’s Bowl (Tex.) Speedway has hosted the series for 26 years since 1978. Of those 26 years, the high-banked half-mile has successfully held multi-day events in 22 of them. This season will be the Outlaws’ fourth consecutive appearance, and the series’ regulars have swept the show since 2014.

The Stockton Dirt Track will make its fifth consecutive appearance on the tour. Schatz has won three of the last four shows since 2015 and owns the track record, clocking-in at 12.566 seconds around the semi-banked, 3/8-mile oval two years ago.  Three current Outlaws (Schatz, Saldana and Sweet) hold track records at one of the stops.


Following the Outlaws’ tour through the Southwest region, the series is only scheduled to make abbreviated stops to nearby tracks in September.

For more information like how to purchase tickets for the 2017 Kick-off Tour, visit woosprint.com/kick-off-tour.