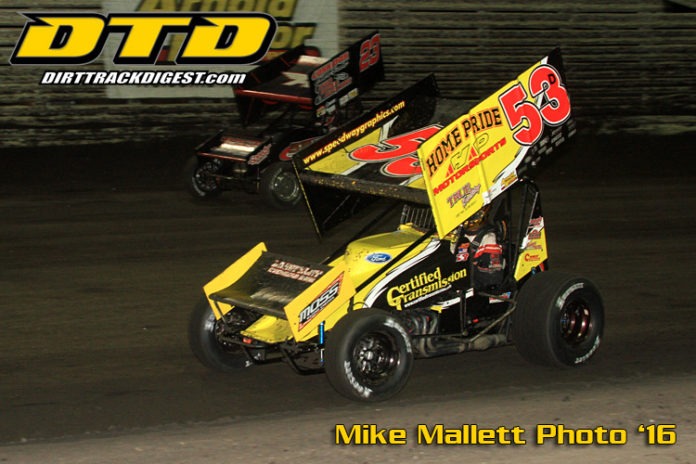 “MAVTV is perfect for anyone who’s a race-fan and ASCS has seen a lot of benefit from being featured on MAVTV all these years,” said ASCS owner and founder, Emmett Hahn. “I can’t thank Forrest Lucas and Bob Patison enough for their support, and providing these teams with a way to be seen all over the world.”

First on the list of feature event is April 7 and 8 as Tony Stewart presents the Texas Sprint Car Nationals at the Texas Motor Speedway Dirt Track.

Following the series to the Northwest, Skagit Speedway’s Jim Raper Memorial Dirt Cup on June 22, 23, and 24 as well as the Fred Brownfield Classic at Grays Harbor Raceway on June 30 and July 1 will be taped.

Back into the Midwest, the Arnold Motor Supply ASCS 360 Knoxville Nationals, August 3, 4, and 5 will again be featured as well as the Hockett/McMillin Memorial at Lucas Oil Speedway on September 21, 22, and 23.


The final event slated to be shows on MAVTV is the 2017 season finale at the Cocopah Speedway on November 10 and 11.

With each race shows roughly one month after being taped, the original airdate, along with multiple re-airings throughout the year offers fans 100 plus hours of Lucas Oil ASCS competition for their view pleasure. Coupled with coverage on www.LucasOilRacingTV.com, fans will be able to watch events as far back as 2011 countless times.

The 2017 season marks the 26th year of competition for the American Sprint Car Series, which is comprised of the Lucas Oil ASCS National Tour presented by the MAVTV Motorsports Network, as well as seven Regional Tours that make up over 150 nights of racing across 23 states.