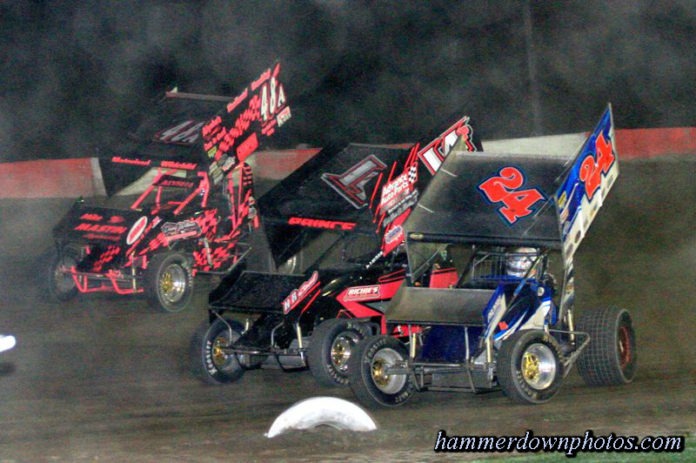 SODUS, NY – The CRSA Sprints presented by Super Gen Products with Champion Power Equipment are proud to announce their tentative 2017 schedule. The traveling 305 sprint car tour has 22 race nights slated, and another three dates penciled in with the track TBA.

The traditional kick-off of the 2017 season will once again be at the New York State Fairgrounds for the 31st annual Gater News Motorsports Exposition and Trade Show on Saturday and Sunday March 12th and 13th. Cars will first hit the track on Saturday, April 22nd at Fonda Speedway in Fonda, NY – the first of three visits to the ‘Track of Champions’ on the season.

Another doubleheader weekend is then on tap for May 19th and 20th, as visits are made to Penn Can Speedway (first of four) and the lone appearance of the CRSA Sprints at Thunder Mountain Speedway on Saturday May 20th.

After a few weekends off, drivers will make the trek west to the Woodhull Raceway in Woodhull, NY for a much anticipated return of 305 sprints to ‘The Highbanks’ on Saturday, June 10th. The remainder of June and the month of July will see return trips to Penn Can, Utica Rome, Orange County, Afton, and Fonda.

To finish out the month of August, after many years being off the schedule, the tour will make a visit to Skyline Raceway, located in Cortland, NY on Friday night, August 25th.

The month of October will see three special events to cap off the 2017 season. First up, on Friday October 6th, Afton Motorsports Park with the Brett Deyo Promotion will host a 40-lap Top 5 Money Rotating Bonus Race. Then, on Saturday October 14th, the 305 sprints will be a part of the annual ‘King of the Can’ weekend with a $500 to win event. The 2017 season will conclude on Saturday, October 21st at the Orange County Fair Speedway with a $1,000 to win event as part of the 56th annual Eastern States Weekend.

A full copy of the 2017 schedule can be found on the CRSA Sprints website, www.CRSASprintCars.com . Also, be sure to follow the CRSA Sprints on Facebook and Twitter (@CRSASprints) for the latest news and updates.

The Super Gen Products/Champion Power Equipment CRSA Sprints are a traveling 305 sprint car series partnered with IMCA/Racesaver that visits many tracks in New York and Pennsylvania.