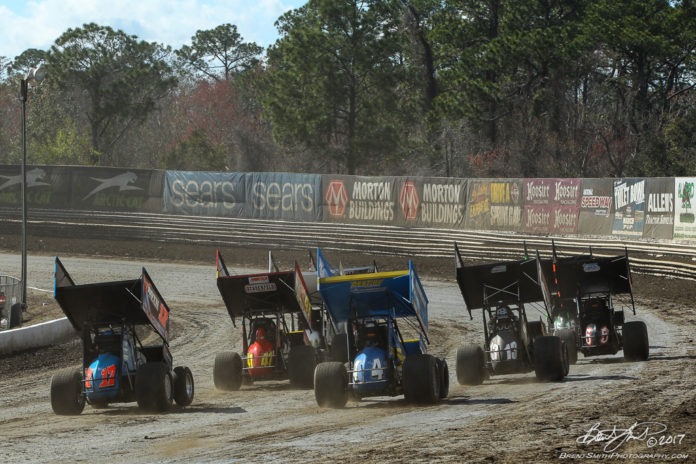 Johnson was victorious to open the 2017 campaign in Florida last weekend, picking up his sixth-career World of Outlaws Craftsman Sprint Car Series win. The veteran driver also recorded a runner-up finish, which has him third in points.

Donny Schatz, the eight-time and defending series champion, picked up a pair of wins in Florida to open the Outlaws season. In fact, both of his wins came on the same day, as a day/night doubleheader was contested, following a rainout the night before. Schatz, the current series point leader, has won in the past in the state of Texas.

Brad Sweet, who picked up a pair of top-10 finishes in Florida, including a second on opening night, heads to Texas fifth in points for his Kasey Kahne Racing team. Sweet won in the Lone Star state last year with the World of Outlaws Craftsman Sprint Car Series.


David Gravel and Daryn Pittman are both tied for sixth in the standings. Each has a pair of top-five finishes thus far in 2017. Gravel led several laps in the finale in Florida, before finishing second, while Pittman ran third on the final night. Pittman won last season in Texas at Royal Purple Raceway.

Joey Saldana is with a new team this year, piloting the No. 17 for Stenhouse Jr. /Wood Racing. The veteran driver picked up one top-five finish in Florida and is ninth in points, just 10 markers out of the top-five. Saldana is also a past winner in Texas at a couple of different tracks.

Shane Stewart and the Larson Marks Racing team, which is co-owned by rising NASCAR star Kyle Larson, are in the midst of their third full season on the road with the World of Outlaws Craftsman Sprint Car Series. Stewart has one top-10 finish thus far in 2017. The veteran driver was victorious last season in Texas at the famed Devil’s Bowl Speedway in Mesquite.

Logan Schuchart, Paul McMahan and Jason Sides are all back on the road again this year and each recorded a top-10 finish while in Florida. Also competing full-time with the World of Outlaws Craftsman Sprint Car Series again in 2017 is Greg Wilson, the reigning Kevin Gobrecht Rookie of the Year Award winner, as well as young drivers Jacob Allen from Pennsylvania and Clyde Knipp from Missouri.

Brent Marks, a Pennsylvania native, is contending for the Kevin Gobrecht Rookie of the Year Award in 2017. He competed in a pair of races last year with the series in Texas. Sheldon Haudenschild is also embarking on his first go-around the World of Outlaws Craftsman Sprint Car series. The second-generation driver raced with the Outlaws in Texas last year, finishing ninth at Royal Purple Raceway.

A strong contingent of “invaders” are expected to take on the World of Outlaws Craftsman Sprint Car Series regulars in the Gator Outlaw Bash, including Texas natives Aaron Reutzel and Josh Baughman, as well as Brady Bacon, Ian Madsen, Kevin Thomas Jr. and RJ Johnson.

Tickets for the inaugural Gator Outlaw Bash, featuring the World of Outlaws Craftsman Sprint Car Series and Southern United Sprints at Gator Motorplex in Willis, Texas, the Gator Bash on Saturday, March 4 can be purchased online at slspromotions.ticketforce.com or by calling SLS Promotions at 815-344-2023 and at the track on race day.