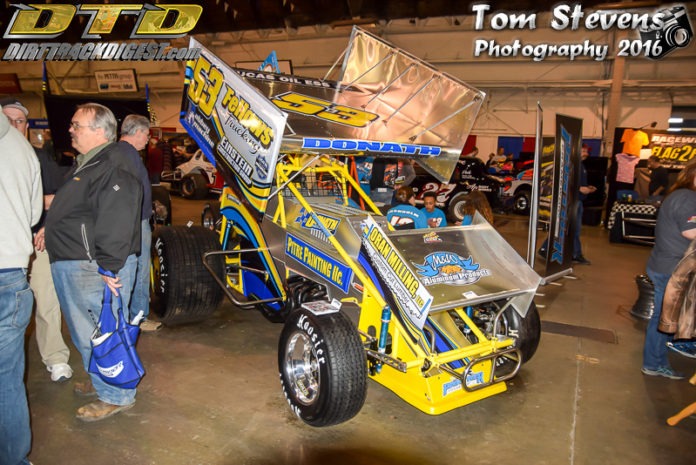 SYRACUSE, NY – The 31st Annual Motorsports Expo held in Syracuse at the New York State Fairgrounds officially kicks off the racing season in Upstate NY. For each and every event held, the Lucas Oil Empire Super Sprints (ESS) has been a proud attendee.

The Center of Progress building will be filled with hundreds of cars and dozens of booths. ESS will once again have a very big presence with not only its own booth where the 2017 merchandise line will be debuted but also showcase five very sharp 360 sprint cars for all fans to see.

Displaying their winged machines will be third place finisher in points for 2016, Paul Kinney. Former Rookie of the Year, Paulie Colagiovanni, the last driver to win an ESS event, Coleman Gulick, making his return to the ESS wars in Vinny Vitale and 2017 first year runner Josh Flint. Also of note, ESS competitor Kelly Hebing will have her car in the Weedsport Speedway booth promoting the Ultimate Wingless Showdown at Weedsport.

All five teams will be ready to tackle most if not all the 2017 Lucas Oil Tour that starts in April and carries through to the end of October. Also, all drivers and many more ESS stars will be on hand all weekend to meet and greet every fan that stops by.

The 2017 line of merchandise from ASI Racewear is some of the sharpest designs ever produced. The annual Tour T-Shirt and Hoodie will be ready, the special green and purple Gatekeeper that drew waves on social media is set for sales all weekend along with a special designer hoodie and long sleeve design. New stitched Flex Fit and New Era hats will be available as well. Fans can also pick up a schedule card as a reminder to where ESS will be headed each and every weekend.


Show hours will be 10-8 on Saturday and 11-4 on Sunday. Please visit www.gaternews.com where special discount ticket locations are listed as well as all the information you need for the Expo.

For over 30 years, the Lucas Oil Empire Super Sprints and the Motorsports Expo have been bringing you the very best of local motorsports…its excitement guaranteed!