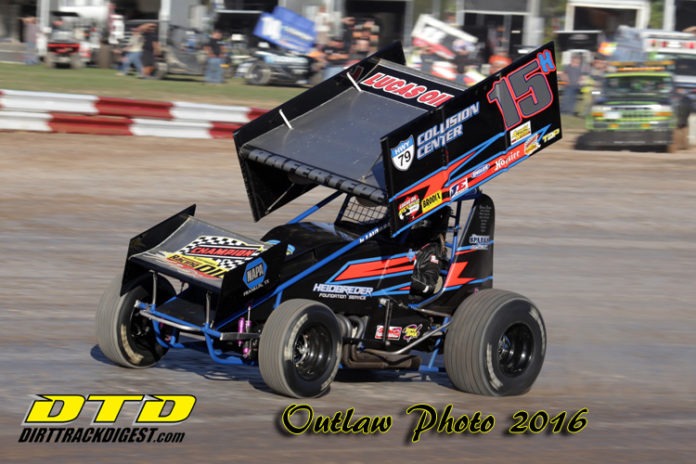 A favorite destination for many on the Lucas Oil ASCS National Tour presented by the MAVTV Motorsports Network, the Devil’s Bowl is the track of choice for defending series champion, Sam Hafertepe, Jr.

“Everybody knows Devil’s Bowl Speedway is my favorite place to race, and to start the season off at a place like that means a lot. I’m excited to get there and I always feel like we’re one of the cars to beat so to start the year out there makes me really confident about the season,” commented Hafertepe who has two Lucas Oil ASCS National Tour triumphs at the Devil’s Bowl Speedway.

Having to play a bit of catch up following the opening swing of 2016, that’s something that Sam looks to rectify in order to get racing for points out of the way.


“Our weak spot last year was the start of the year and even with a couple solid runs after that, we didn’t really get going until about June when the season really took off so what I’m focusing on this year is being up front from the get go and being in contention for wins right out of the gate. We just didn’t have that last year so I feel like if we can do that, then hopefully we can get a handle on the points now and just focus on running our races.”

No longer a young man, but not yet an old man, Sam Hafertepe, Jr. credits a lot of his success in 2016 to his maturity both on, and off the track saying, “I know that was probably the biggest key to our success is maturing as a driver. I’ve said for years that I have the talent and the ability, just mentally never focused hard enough and did the right things where last year, that was something I felt I did well and coming into this year I’ve been working on cutting down weight, getting in better shape, and just tidying up the loose ends we had last year.”

Returning as the driver of Keith Dobbs Motorsports, the Hwy. 79 Collision/J&J Chassis No. 15h is one of 15 drivers who have made the choice to be a part of the Lucas Oil ASCS National Tour presented by the MAVTV Motorsports Network in 2017.

“To be honest, I think first and foremost people are starting to realize how good it is to race in the ASCS division. It’s attracted a lot of teams and we’ve got a lot of good drives. Just going down the list, you’ve got a good mix of talent and there’s no one on the list that doesn’t have a chance to run up front and be in contention.”

The 44th running of the Devil’s Bowl Spring Nationals takes place on Friday, March 17 and Saturday, March 18 with each night of racing getting underway at 8:00 P.M. By the numbers, this weekend stands to be the 87th and 88th nights of racing at the Devil’s Bowl with the Lucas Oil ASCS National Tour since 1994. In the series last visit for the Winter Nationals on October 16 and 17, Johnny Herrera and John Carney II split the weekend.

The weekend also serves as the opener for the Griffith Truck and Equipment ASCS Gulf South Region which is co-sanctioning the two day affair. Channin Tankersley enters the year as the defending series champion.

For more information on the Devil’s Bowl Speedway, and to purchase tickets in advance, call (972) 222-2421 or log onto http://www.devilsbowl.com.