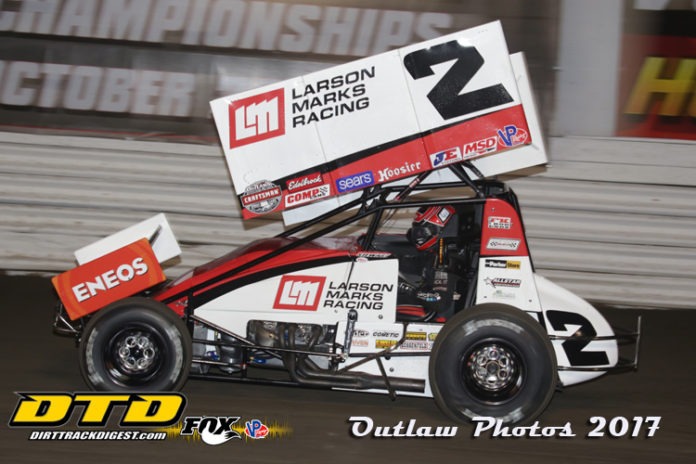 The Outlaws visit Keller Auto Speedway at Kings Fairgrounds for the Kings Outlaw Shootout -the first race since 2015. Shane Stewart dominated when the Outlaws last visited the semi-banked 3/8-mile oval on April 17, 2015, leading all 35 laps to score the $10,000 ransom.

Stewart is coming off a pair of top-10 finishes last weekend at Thunderbowl Raceway in Tulare, CA, including a season-best second-place finish on March 17, where he narrowly missed a victory after leading 32 laps. Returning to Keller, where he has had success, could be the breakthrough Stewart needs to push him into the win column in 2017.

“It feels great to have some momentum coming off of Vegas and Tulare,” Stewart said. “The last time we raced at Keller Auto Speedway we were able to get the win, so we should have some good notes from that night to build off of.”


“[Keller] can be a tricky place to run at, and I am not sure that it suits my racing style, but it can be a fun racetrack, and I am looking forward to the battle.”

Former Outlaw Cody Darrah won at Keller in 2014, while current Outlaw point leader Donny Schatz earned a victory in 2013. Prior to 2013, the Outlaws went 10 years without a stop at Keller following 19 consecutive years of action from 1985 to 2003. In all, the track has hosted 31 World of Outlaws races.

From Keller, the Outlaws head south to Perris Auto Speedway for the SoCal Showdown where Outlaw drivers have dominated the event for 10 consecutive victories. It marks the seventh straight season the Outlaws have visited the Southern California track. Daryn Pittman claimed last season’s stop at Perris on April 16 by leading all 30 laps and also won in 2013.

The SoCal Showdown has seen three different winners over the last five years, including Pittman. Joey Saldana has a pair of victories at Perris (2012 and 2014), while Paul McMahan was the victor in 2015. Hall of Famer Mark Kinser is the all-time Outlaw wins leader at Perris with five.

While the Outlaws have traditionally been tough to beat throughout their western swing, several local talents are threats to end the Outlaws western reign. DJ Netto of Hanford, CA is a regular competitor at Keller and has shown speed against the Outlaws after timing in fourth fastest at Tulare on March 18. Add fellow California natives Dominic Scelzi of Fresno, CA, Kyle Hirst of Paradise, CA, and Carson Macedo of Lemoore, CA to the list of competitors seeking to upset the series regulars, and it’s a talented roster of Sprint Car racing’s best.