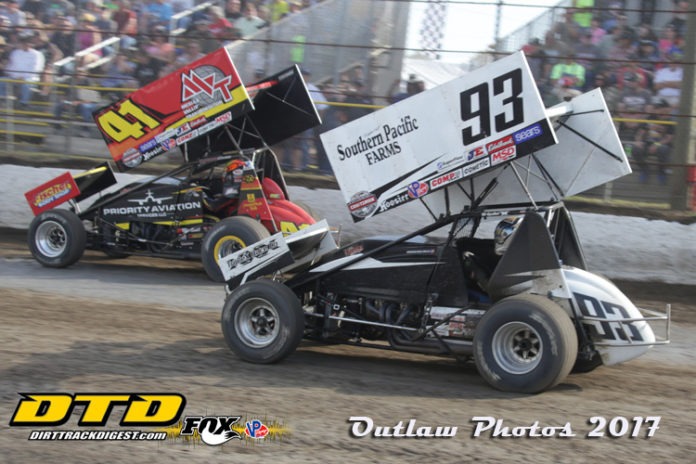 By CLAYTON JOHNS (WORLD OF OUTLAWS PR)
CONCORD, NC – The World of Outlaws Craftsman® Sprint Car Series will return to Riverside International Speedway in West Memphis, AR for the first time since 2009 on Friday, April 21 for the Bull Ring Outlaw Blitz. Located on the west bank of the Mississippi River and just west of Memphis, TN. the high-banked quarter-mile was established in 1949 and is among the longest continuously operated dirt tracks in the United States.
The Outlaws last visited Riverside on April 24, 2009 when Tim Kaeding earned the victory over Tony Bruce Jr. Daryn Pittman and Donny Schatz won in 2007 and 2008 visits, respectively. Riverside has hosted the World of Outlaws Sprint Cars nine times, dating back to 1979.
A return of the World of Outlaws is a welcome addition to the Riverside calendar for track owners Clayton and Sherry Allen. The track hosts weekly 305 winged Sprint Car competition, while 360 winged Sprint Cars compete on a bi-weekly basis.
“We have some pretty top-notch drivers around here on a local basis, but anytime you get a national brand here like the World of Outlaws, it’s always more exciting,” said Clayton Allen, Riverside International Speedway owner. “We’re looking forward to it.”
Fans can expect lightning-quick action around the quarter-mile track when the Outlaws invade. The track record sits at 11.060 seconds set by Jason Solwold on May 5, 2007. Riverside boasts a unique gumbo clay surface that often releases additional moisture as the night wears on.
“There’s no dirt like it in the country,” Allen said. “As a rule, we’re faster at the end of the night. It’s the highest clay content anywhere around.”
Jason Sides, a World of Outlaws Craftsman Sprint Car Series regular since winning the Kevin Gobrecht Rookie-of-the-Year in 2003, raced 360 Sprint Cars at Riverside during the outset of his career. A native of nearby Bartlett, TN, Sides is excited for a return to a track he first raced at in the early 1990s.
“It’s always nice to get close to home and race there,” Sides said. “Last year Little Rock was the closest that we raced to home. This one here is a lot closer yet, so it will be good. Hopefully we can have a good run there.”
Sides echoed Allen’s sentiment about Riverside’s track surface as one of the fastest anywhere, given the right conditions.
“It can be wet and fast, really sticky after the rain or when they can’t control how much water is on it,” Sides said. “It’s got that super sticky gumbo. It will pull your shoes off.”
Sides is on a short list of four current Outlaw regulars who competed when the tour last stopped at Riverside, including Schatz, Kraig Kinser and Joey Saldana. Current Kevin Gobrecht Rookie-of-the-Year contender Sheldon Haudenschild’s father, Jac Haudenschild, was also in the field. Despite his previous experience, Sides doesn’t feel he holds an advantage against the talented Outlaw field.
“Anybody can go to a new track that they’ve never been to and be just as good as anybody else,” Sides said. “It’s small and a tight little bullring, so it’s going to be tough.”
Riverside has also been home to several Sprint Car stars over the course of its lifetime, notably former full-time Outlaw and three-time World of Outlaws champion Sammy Swindell, who first competed at the track in 1973. The Outlaws will add to that history when The Greatest Show On Dirt makes its only stop in Arkansas this season.
Tickets are on sale for the World of Outlaws Craftsman Sprint Car Series return to Riverside International Speedway on April 21 by visiting dirtcar.ticketforce.com and by calling 844-DIRT-TIX (844-347-8849). Both Reserved Seating and General Admission tickets are available in advance for $35. Reserved Seating for children 14 and under is $20.