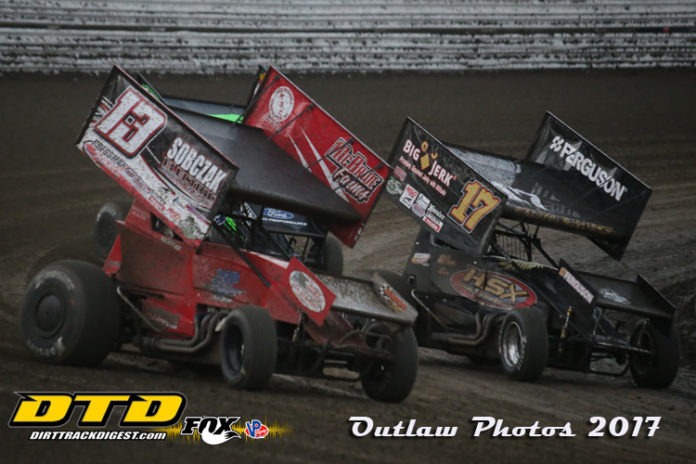 INDIANAPOLIS, IN – With the 2017 season officially underway, the Arctic Cat All Star Circuit of Champions is pleased to officially welcome new, as well as returning, Series partners, each bringing a significant level of support that will help fuel one of America’s oldest and most prestigious touring sprint car series. Boasting a roster of nearly 20 full-time travelers, the Arctic Cat All Stars will take on a schedule exceeding 50 events in 2017, spanning nearly nine months from start to finish.

As previously announced, Arctic Cat, the official recreational vehicle of the Arctic Cat All Star Circuit of Champions, returns in 2017 as the title sponsor, extending its relationship with “America’s Series” through the 2018 season. With the intent to develop a sturdy connection with devoted race fans, Arctic Cat will promote their product line through a number of displays that will be on hand during select events throughout the season. Arctic Cat representatives will give fans an opportunity to see new product line, as well as learn about special sales and savings.

Effective immediately, Ford Performance, one of the world’s leaders in motorsports performance and racing operations, is now a proud partner of the Arctic Cat All Star Circuit of Champions. On top of its commitment with the Series, Ford Performance will also take on the presenting role during an upcoming visit to the Kokomo Speedway in Kokomo, Indiana, on Friday, May 19.

In addition to Arctic Cat and Ford Performance, a multitude of All Star partners that were associated with the Series in 2016 will continue their relationships in 2017.

“We are proud to be associated with each and every one of our Series partners,” Tony Stewart explained, owner of the Arctic Cat All Star Circuit of Champions. “Lucky for us, we’ve had the opportunity to build great relationships during the last two seasons. We prioritize their commitment to our Series. In return, we’ll do our best to promote those who support the All Stars.”

About Hoosier Tire:
Hoosier Racing Tire is the official and exclusive tire supplier of the Arctic Cat All Star Circuit of Champions! Hoosier Racing Tire is the largest manufacturer of racing tires in the world with distributors located both domestically and worldwide. Visit the brand new HoosierTire.com website for the best in hats, shirts and all Hoosier apparel. Receive special offers and stay up-to-date with their weekly promotions by following them on Facebook, Twitter and Instagram @HoosierTire

About Daido:
Daido Metal produces Original Equipment automotive engine bearings for the most recognizable brands around the world and is also a leading producer of engine bearings in every other engine market from power sports to marine and off-highway heavy machinery. Daido is a leader in race engine bearings serving all major global race series and the race engine builder market, including the Arctic Cat All Star Circuit of Champions. The same technology that has helped power winners at Daytona, Indy, Le Mans and Monte Carlo is used in every bearing made for stock block race engines across America. For more information, visit www.daidometal.com.

About All Pro Aluminum Cylinder Heads:
Since 1986, All Pro Cylinder Heads has successfully produced the absolute best small block Chevrolet, LS Gen 3 and W9RP Mopar cylinder heads available. Developed for top engine builders worldwide, the family owned business of Bob and Susie Williams is proud to manufacture all American made cylinder heads in Johnstown, Ohio. The dedicated staff at All Pro supplies powerful parts to a majority of champions in series such as the All Star Circuit of Champions, PA Posse, World of Outlaws, LSX Drag Radial, Off Road Baja 1000 and many more. All Pro is honored to serve the best customers in the business with the highest quality parts and Service possible. For more information, visit All Pro online at www.allproheads.com.

About Lincoln Electric:
We are a global manufacturer and the market leader of the highest quality welding, cutting and joining products. Our enduring passion for the development and application of our technologies allows us to create complete solutions that make our customers more productive and successful. For more information, visit www.lincolnelectric.com.

About MSD:
MSD products are the finest ignition components you can install on your car whether it’s a daily driver, dirt tracker, 4-wheel drive, a seven second Pro Stock car or Big Foot. MSD is your exclusive performance ignition company and we thank you for your interest and support.

About JE Pistons:
With 70 years of experience, JE Pistons is the leader in forged racing pistons. JE offers the largest selection of off-the-shelf racing pistons for all popular engine combinations. JE can also manufacture custom pistons for your race engine in only two weeks. In a rush? – JE offers expedited services that can complete your custom piston order in only five days. If you demand the highest quality American-made pistons for your race engine, call JE Pistons today, or visit online at www.jepistons.com.

About Classic Ink:
Classic Ink USA Screenprinting and Embroidery is constantly testing the limits of custom racewear and specialized embroidery. Headquartered in Western Pennsylvania, Classic Ink holds the highest standard, maximizing your return, as well as the ultimate customer satisfaction. From “Track Swag” fan wear to “Quick Crew” crew wear, Classic Ink has you covered. Their dedicated staff and graphic design team will be sure to keep your race team, and your fans, looking sharp on and off the racing surface. Contact Classic Ink USA Screenprinting and Embroidery today and get your race team ahead of the competition. Visit www.classicinkusa.com. That’s Classic Ink; “at the track and on your back!”

About State Water Heaters:
In 1946, State Water Heaters was founded by Herbert Lindahl, Sr. as a small entrepreneurial company producing coal and wood-burning stoves in a garage in Nashville, Tennessee. In the years that followed, State expanded and became a leader in the water heating industry, through steadfast commitments to seeking new materials, new technology and innovative engineering techniques. When it comes to building durability into a product, nobody does it like State. Learn more at www.statewaterheaters.com.

About Outback Steakhouse:
Australia inspires a fresh take on life. That seize-the-day mindset reflects in all that Outback does – especially in the menu. Outback serves up a wide variety of innovative creations, bold flavors and traditional classics, made fresh to order and how you want it. Enjoy mouthwatering steaks, grilled chicken, ribs, fresh seafood and the world famous Bloomin’ Onion(R) all at affordable prices down under. Don’t forget Outback’s unique cocktails, wines, premium liquors and beer – domestic, craft, import, and Aussie! For more information, visit www.outback.com.

About Cometic Gasket:
Cometic Gasket is the Official Gasket of the Arctic Cat All Star Circuit of Champions. Cometic is a leading worldwide supplier of gaskets and engine sealing solutions for the Automotive Performance, Powe sports, Original Equipment and Remanufactured Engine Industries. Cometic gaskets are must-haves for championship-winning teams across the globe. Cometic Gaskets are proudly made in the USA. For more information, log on to www.cometic.com. Cometic Gasket. Sealing championships since 1989.

About Elliott’s:
Elliott’s Custom Trailers & Carts, also carrying Haulmark Toter Homes, Bolt Trucks and Haulmark Trailers, is a full service facility carrying new and used trailers. Trailer lines available include United, Cobra, Intech, and Cargo Mate. Elliott’s is also an authorized EZ-GO golfcart dealer. They offer repair and service on all of their products, as well as carry a large line of parts and accessories. Elliott’s has been in the trailer business since 1995 and a golfcart dealer since 2004, serving areas all over the world. Contact Elliott’s Custom Trailers & Carts today at www.elliottstc.com.

About Kistler:
Kistler Engines was established in 1993 and builds lightweight, high-performance racing engines with a commitment to quality. We pride ourselves in high tech, innovative designs, producing highly competitive engines for sprint cars (410 c.i., 360 c.i. & 305 c.i.), as well as, late models & midgets. Kistler Engines has also earned a great reputation for our service among professional race teams due to our quick turnaround time on rebuilds.

About Jake’s Cart:
Jake’s Golf Carts, “America’s Home for Custom Carts” is a proud golf cart provider for the Arctic Cat All-Star Circuit of Champions. Jake’s has proudly supported both local and national dirt track racing for over 20 years. Did you know Jake’s ship carts nationwide and offers financing for as low as 0%? If you are in the market for a golf cart give Jake’s a call and mention the All-Star Circuit of Champions for a special racing discount or you can check them out at www.jakesgolfcarts.com.

About Schoenfeld:
Founded in 1974 by Don Schoenfeld, Schoenfeld Headers is the world’s largest manufacturer of circle-track headers, specializing in a variety of high-quality exhaust parts, including turn-downs, extensions, tubing bends and elbows, race mufflers, insert mufflers, mandrel bends, exhaust reducers, header gaskets, and more. Schoenfeld Headers is based in Van Buren, Arkansas. We truly make exhaust applications for anything with an engine. From mini sprints to sprint cars, midgets and late models, dirt or asphalt, all the way up through the world of truck and tractor pulling and marine as well. Schoenfeld has a system for your needs, including muscle and passenger cars.
Schoenfeld Headers also has state of the art CNC bending and welding equipment, as well as a state of the art chassis dyno facility. Therefore our quality and craftsmanship are second to none, making them the most popular name in racing headers. We remain committed to the Saturday night racer, providing the very best in “Performance, Quality, and Value”

About Donovan Engineering:
Donovan Engineering Corporation has been making aluminum engine blocks since 1971 with the Donovan 417 which was based on the 1958 Chrysler 392 Hemi. Since then, the state-of-the-art facility has provided engine builders around the world with aluminum engine blocks based on the small block Chevy, big block Chevy, Model-D, and the 417 Hemi. For more information, please visit Donovan live on the Web at www.donovanengines.com.

About the Arctic Cat All Star Circuit of Champions:

All Star Enterprises, LLC, wholly owned by Tony Stewart, d/b/a the All Star Circuit of Champions, is a winged sprint car series. The All-Star Circuit of Champions Sprint Car Series is one of the oldest traveling 410 sprint car organizations and is a staple of grassroots, open-wheel racing. Formed in 1970 by Bud Miller, the series has largely been considered the first ‘outlaw’ Sprint Car organization of the modern era. After a 10 year stint as owner of the All Stars, Miller passed control of the series to Bert Emick in 1980; a reign that would continue through 2002. Guy Webb then purchased the series from Emick in the summer of 2002 and served as the series President for the next 12 years. Motorsports entrepreneur Tony Stewart agreed to terms with Guy Webb to become the sole owner of the original winged sprint car tour in January of 2015.