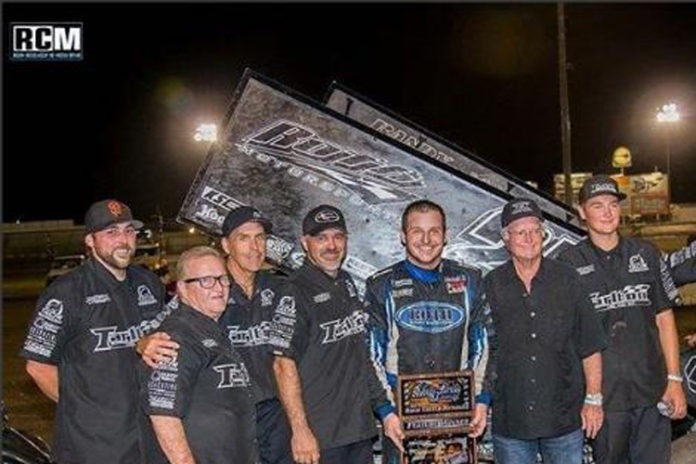 BAKERSFIELD, CA – The Dirt Track at Kern County Raceway Park will host the season opener for the exciting 900-horsepower King of the West-NARC Fujitsu Sprint Car Series this Saturday, April 8th. This marks the only visit by the traveling series to the one-third mile oval this season.

Leading the field of entries will be defending three-time King of the West champion Kyle Hirst of Paradise, CA. Hirst will have a lot in common with the other 25 teams expected to compete in that he has never raced at the newly configured one-year old track.

“It’s always a challenge to compete at a new racing facility,” said Hirst, “because we don’t know what to expect and everyone is on a level playing field. It’s going to come down to what team can dial in the proper chassis set up after just a few practice laps. A little luck comes in handy also.”

The short 17-race KWS-NARC schedule leaves little margin for error for those with championship aspirations. Also, the organizations new points schedule pays a premium for winning races as teams chase the winner’s share of the $20,000 purse and a year-end $62,000 championship point fund.

Hirst and Campbell’s Bud Kaeding dominated victory lane in 2016, with six and five feature event victories, respectively. Six other drivers captured the other nine wins. Both Hirst and Kaeding plan to pick up where they left off in 2016.

“The best way to pursue a championship is to start strong and win the first race of the season,” continued Hirst, who drives for Fresno-based Roth Motorsports. “Winning for the first time at a new track would make it extra special.”

Among the other drivers expected to compete on Saturday include Mitchell Faccinto and DJ Netto of Hanford; Justyn Cox of Clarksburg; Sean Watts of Atwater; Penngrove’s Chase Johnson; Cory Eliason of Selma; Grass Valley’s Jason Statler and many more.

Driver Bud Kaeding will be signing autographs near the front gate between 5:00-5:30 p.m.
ED NOTE: The scheduled March 4th KWS-NARC season opener was rained out.