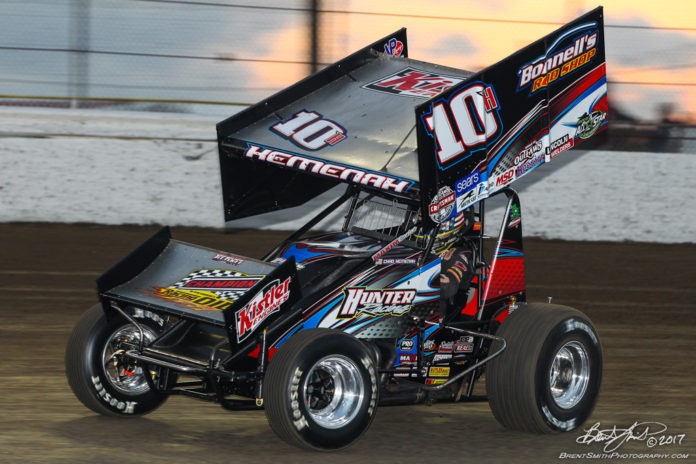 INDIANAPOLIS, IN – After a near-two month hiatus, last sanctioning competition on Thursday, February 16, at the Volusia Speedway Park near Barberville, Florida, the Arctic Cat All Star Circuit of Champions are set to return to work, this time north of the Mason-Dixon Line where the Series will stay for the remainder of the season.

Boasting a roster of nearly 20 full-time competitors, “America’s Series” will resume competition with a visit to the Atomic Speedway near Chillicothe, Ohio, on Sunday, April 9; the lone Arctic Cat All Star program of the upcoming weekend and the first of six events during the month of April. Full-time Arctic Cat All Star teams, led by five-time and defending Arctic Cat All Star Circuit of Champions titlist Chad Kemenah, will battle the best-of-the-best in the Buckeye State during their invasion of southern Ohio, including a strong contingent of Ohio Sprint Car Series regulars.

“We are definitely excited to host the Arctic Cat All Stars for their first Ohio appearance of 2017,” Brad McCown said, Atomic Speedway promoter. “It was in our best interest to move the event to Sunday rather than host it on Saturday. With so much rain in the forecast for this week, an extra day will give the facility more time to dry, as well as give me an extra day to work on the track. I think this decision will benefit everyone involved.”

The Arctic Cat All Star Circuit of Champions made an Atomic Speedway appearance on two separate occasions in 2016, one of which during Ohio Sprint Speedweek presented by Cometic Gasket where Kyle Larson, the current Monster Energy NASCAR Cup Series point leader, was the victor. Sheldon Haudenschild, the current World of Outlaws Craftsman Sprint Car Series Rookie of the Year point leader, was the second winner at Atomic Speedway in 2016, earning the Arctic Cat All Star finale victory on October 22.


“Between the large following of full-time All Star competitors, and the tough field of local and regional talent expected to be on hand, I think we have the making for a great battle on Sunday evening,” Brad McCown explained. “Hopefully the weather cooperates and we give fans something extra special to talk about on Monday morning.”

Atomic Speedway in Chillicothe, Ohio, will open pit gates at 1:00pm on Sunday, April 9. General admission gates are scheduled to open at 3:00pm, followed by hot laps at 5:00pm. A mandatory drivers meeting will be conducted at 4:30pm. Those seeking additional news and notes pertaining to the event should visit Atomic Speedway live on the Web at www.atomicspeedway.net.