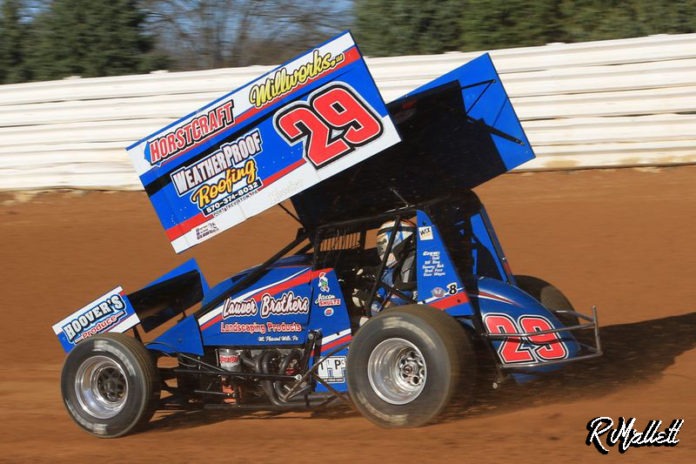 SELINSGROVE, PA – There is a saying, “good things happen to those who wait.” Well for Jason Shultz he’s been waiting for what seems like an eternity to win an opener at Selinsgrove Speedway. On Saturday night, he finally got it done. The Carlisle, Pa., driver led the entire 25-lap affair to earn the $2,500 payday.

“This relieves a little bit of pressure,” said Shultz. “We had a few that a couple years ago we may have had one. A tire blew up. It’s always nice to win opening day. This is actually my first one. It’s a lot of pressure off me.”

Shultz started on the pole which allowed him to quickly move out in front. As he jumped to the lead Davie Franek drove around Colby Womer to take over the second spot in the running order on the first lap.

The top two remained unchanged as they set a torrid pace early. That pace slowed slightly on lap seven as Shultz hit traffic. As Shultz struggled slightly, Franek was able to close the gap. At the halfway point the pair ran nose to tail in traffic as Shultz struggled to navigate his way through.


“We couldn’t move around,” stated Shultz. “I didn’t move around a lot. I was on the bottom. It looked like you could arc it pretty good going into each corner. If someone was there they probably could have made the pass.”

Shultz got a caution on lap 16 for a slowing Eric Tomecek that cleared the way in front. He resumed the lead on the restart with Franek staying in the second spot. The battle behind the pair picked up as Chad Layton, Womer and Nate Snyder raced for the third. Snyder moved from sixth into the top four on the restart to begin challenging Layton.

Justin Whittall forced one final caution as he came to a stop in the second corner on lap 19. Like the prior restart, Shultz stayed put at the front. Franek tried to chase while Snyder was able to get a run off of the fourth turn to take over the third position from Layton.

Shultz went unmolested over the final handful of laps to score the win while Franek ended up in the runner-up position. Franek admitted that he didn’t need the cautions that slowed the pace throughout.

“If it went non-stop green it would have been a different story,” commented Franek. “He was a sitting duck. He couldn’t maneuver. He was stuck to one lane. He had wing speed and he was decent but as soon as he got in dirty air he would have been mincemeat.”

Although a win is always better, Franek wasn’t all that disappointed with his second place effort.

“It’s a good way to start the season off,” mentioned Franek. “My wing got jammed. I was trying to move that back during the race. It was all the way toward the front. I know next week we are going to be real good.”

Snyder, a former Selinsgrove Speedway titlist, rounded out the top five in the first start for his self-owned team as he returned to the track for weekly competition. He made some moves on restarts that proved to be the difference maker for him.

“I usually like running high here but all night long it was kind of on the bottom,” said Snyder. “I knew that was key. On the restarts you can get guys on the top. It worked out for us.”

Layton returned to weekly action in the Ritter Racing No. 35 and finished fourth while Larry Kelleher finished fifth after winning his heat race earlier in the night.

Franek debated running a softer tire compound during Saturday night’s feature. He had some of the softer compound Hoosier Tires that that Empire Super Sprint drivers run in New York. In the end elected to go a different route.

“We went with what we normally run here, but to be honest I think we probably should have had them on,” cited Franek. “After about the first five laps, the track came back a lot after they spritzed it, the track kind of got dirty and I think I would have been better off with an HTC (compound).”…

As mentioned above, Snyder was making his first start for his new team. To come out of the gate third was a strong debut.

“This is a whole new deal, new car, new motor, so we’ll take it,” commented Snyder. “We got a first in the heat and a third in the feature so I’m really happy. The finance end of it is a downfall but you can call your own shots and have a couple good guys with you it makes it all worthwhile.”…

Mallie Shuster’s day ended on the very first lap of the heat race. Shuster got high through turns three and four causing him to get into the wall and flip. He wasn’t hurt but his day was done…

Michael Walter II had his day end in hot laps. The team succumbed to motor issues…

Ryan Kissinger broke a rear-end in hot laps. The team made the necessary repairs but he was late to the staging area for his heat. As a result he was forced to start scratch…

Defending opening day winner, Cody Keller, watched his day literally go up in smoke on the first lap of the A-Main. He made it through turns one and two before smoke billowed out of his 99 forcing him to pull off the track.