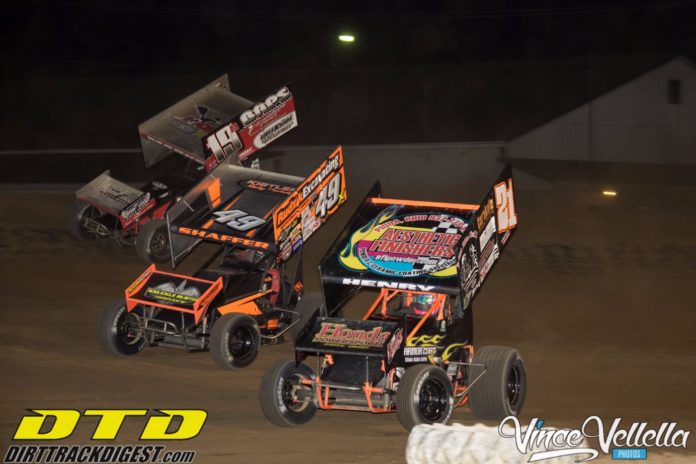 INDIANAPOLIS, IN – After opening the month of April with a visit to Atomic Speedway near Chillicothe on Sunday, April 9, the Arctic Cat All Star Circuit of Champions will move forward and continue their April march through The Buckeye State with a visit to the Attica Raceway Park on Saturday, April 15, joining a competitive, local contingent of open wheel competitors for the annual HD Supply Spring Nationals worth $5,000. Nearly 20 full-time Arctic Cat All Stars will invade northwest Ohio on Saturday evening; the second of three Ohio appearances for the Series during the month of April.

Saturday’s visit to Attica will be the first of four during the 2017 season for “America’s Series,” as well as the 113th total appearance since the Series first visited the 1/3-mile, clay oval on September 4, 1989. The Arctic Cat All Star Circuit of Champions last visited the home of “Ohio’s Finest Racing” on Saturday, September 3, during the inaugural Dirt Classic Ohio. Wooster, Ohio’s Sheldon Haudenschild was the main event winner, scoring $10,000 for his efforts, as well as a second career Arctic Cat All Star victory at Attica Raceway Park.

Alvada, Ohio’s Chad Kemenah will lead the Arctic Cat All Stars into action on Saturday afternoon. The five-time and defending Arctic Cat All Star Circuit of Champions titlist is the current Series point leader and the most recent feature winner, earning high honors at Atomic Speedway on Sunday, April 9. A last lap pass solidified his position on top of the podium, overtaking the top spot from Lee Jacobs who led the first 29 laps of the 30-lap feature program. Including his recent victory, Kemenah has three top-five finishes during his first six Arctic Cat All Star main event starts.

New Castle, Indiana’s Caleb Armstrong will enter the HD Supply Spring Nationals currently second in the Arctic Cat All Star championship standings, followed by Donny Schatz, Caleb Helms and Danny Dietrich. Armstrong has two top-five finishes on the season, settling for 16th during his most recent All Star start at Atomic Speedway after battling early for a podium finish.