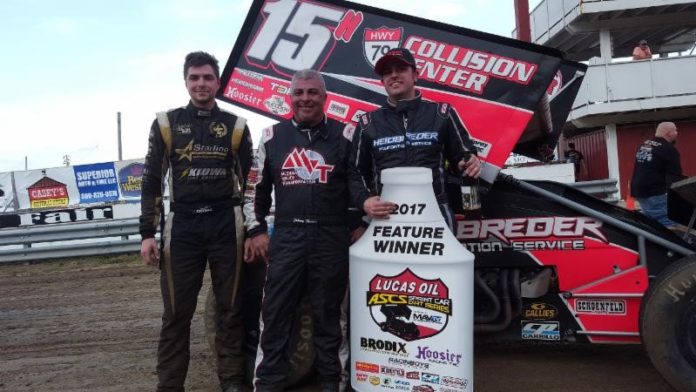 SEDALIA, MO – Tying a record set by Gary Wright in 2005, Sunnyvale, Texas shoe Sam Hafertepe, Jr got one for the thumb at the Missouri State Fair Speedway with the Lucas Oil American Sprint Car Series presented by the MAVTV Motorsports Network; beating out Johnny Herrera by mere feet at the drop of the checkered flag.

“Let me tell you, Johnny and I raced well together last year and it’s the same this year. I’ve got a lot of respect for what he does, and he shows the same towards me and when we can put on a show like that in front of these fans, that’s what makes them want to come back every time,” said Hafertepe was congratulated in the car by Herrera.

Asked about his fifth win in as many starts, Sam replied, “This is incredible. We really didn’t have the best car early on. We were way to tight and I had to start making it work, especially in three and four where they were just eating us up but just hats off to my guys.”

Fighting the tight race car though the opening laps, a restart on Lap 8 would prove pivotal for Hafertepe who was able to maneuver out of dirty air. Advancing into the chase for the lead, Hafertepe trailed Johnny Herrera by just shy of a half straightaway as the pair began to find traffic at the races midpoint.

With the aid of traffic the Hwy. 79 Collision No. 15h quickly reeled in the No. 45x and began to challenge on the fifteenth round. Pulling even with Herrera of the following lap, Sam was able to secure the lead and begin putting slower cars between he and the MVT No. 45x.


Caution on lap 18 for Jake Greider and Seth Bergman breathed new life into the battle for the top spot as Herrera charged the bottom side of the speedway through turns one and two to capture the lead as the field advanced to the back stretch.

Challenging in kind though the third and fourth turns, Hafertepe was able to get back on point as Herrera fell to a ten car length deficit. Fighting an increasingly tight machine through the high side of turns one and two, the No. 15h saw his advantage being to dwindle. Rolling to twin flags, Herrera was there. Pulling to Sam’s back bumper, the pair raced under the white flag with Herrera trapped in dirty air. Shuffled up the racetrack, Johnny quickly regain momentum and again challenged as the leaders hit the final two turns.

Holding Hafertepe to the top of the race track, Johnny hustled the bottom for everything he had but would come up a mere feet shy of the win.

To the approval of his hometown fans, Jonathan Cornell would run third in the Starline Brass No. 28 with Blake Hahn posting his first top five of the season in the Pizza Express No. 52. Having to rebuild his car after a flip at Texas Motor Speedway, Missouri’s Kyle Bellm advanced from eighth to fifth in the RAMS No. 14k.

Posting his best finish of the season, Canada’s Skylar Gee crossed sixth with Aaron Reutzel earning the CP Carrillo Hard Charger of the Night with a blistering run from 18th to seventh. Justin Henderson crossed eighth with Sammy Swindell from 12th to ninth. The top-ten rounded out with Oklahoma’s Wayne Johnson.

The 25 car field was split into three Heat Races with Kyle Bellm, Skylar Gee, and Justin Henderson earning wins. New for the 2017 season, a Dash for Cash was run for the drivers with the Speedway Motors ASCS Warrior Region presented by Impact Signs, Awnings, and Wraps with Randy Martin making the closing laps pass to pick up a nice $600 bonus.

For continued updates on the American Sprint Car Series and the over 150 National and Regional races that make up the ASCS Nation in 2017, log onto http://www.ascsracing.com.