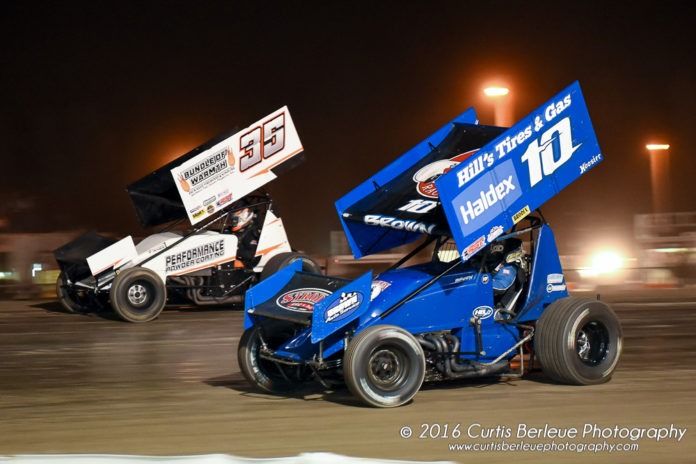 SODUS, NY – After much anticipation, the 2017 A-Verdi Storage Containers Patriot Sprint Tour points championship for both the American and Canadian series drivers will begin next weekend on Friday, April 21, at Outlaw Speedway, and Saturday, April 22 at Merrittville Speedway.

Friday’s show at Outlaw Speedway will be a challenge event with the Empire Super Sprints and United Racing Club. The show will be run under the ESS qualifying format with ESS officials handling all scoring. Full points will be awarded to all PST Members and will be scored towards the 2017 American Series Championship.

Saturday’s show at Merrittville will follow the PST qualification format and points will be scored towards the 2017 Canadian Championship tour.

The Patriots have had a long and successful history at Outlaw Speedway (formerly Black Rock) holding 42 shows dating back to September 6, 2003 when Scott Bonnell scored the victory. The most recent show goes back to last September when Chuck Hebing scored the thrilling Outlaw Fall Nationals win over Josh Weller, and teenage driver Dylan Westbrook.

Merrittville Speedway, located in Thorold, Ontario has become the annual kick off to the Canada series for the past several seasons. The first ever show dates to June 24, 2006 when Bryan Howland picked up the win. The track has also seen Scott Kreutter, Steve Poirier, and Jason Barney grace victory lane under the PST banner.

Tires and Fuel will be available at Outlaw only in the Mike Emhof Motorsports Inc. Trailer, along with other miscellaneous sprint car parts for purchase. Fans are encouraged to follow the Patriot Sprint Tour on all social media accounts including facebook, Instagram and twitter. You can also log onto patriotsprinttour.com for more information.