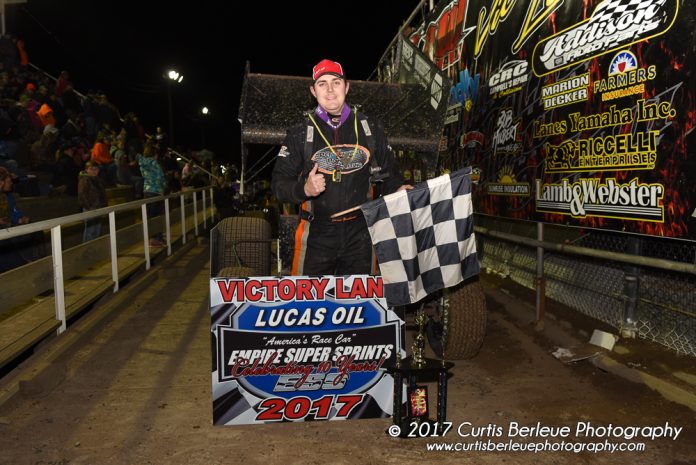 SYRACUSE, NY – Jared Zimbardi has a knack to find victory lane at the Outlaw Speedway in Dundee, NY and on Friday night at the Lucas Oil Empire Super Sprints (ESS) opener it was no different. Battling tricky track conditions, lapped traffic ad several challengers, the Bradford, Pa pilot took home $3,000 with the a wire to wire run.

Zimbardi drew the pole for the 25 lap NAPA Auto Parts US Tour event with Jason Barney drawing outside pole making for drama even before the green flag was waved. “I knew Jason was going to be tough, he’s tough where ever he goes,” Zimbardi told of the challenge ahead.

“With the conditions we said as a team that we really didn’t need to go balls to the wall we need to go 80% in the A-Main, there are good cars out there but you also needed to save equipment.”

Zimbardi got the jump on Barney and then looked to find a spot on the track where he was comfortable. “I was searching early on to find a line,” Jared went on, “I found a good lane in three and four way up top, it helped me get passed lap cars where in one and two I kind of stayed behind the car in front of me until three and four.”

A couple of cautions and red flags slowed the action up until lap seven. Then the final 18 laps went non-stop and Zimbardi ran about as perfect as a race as you can. The win for the second generation driver was his second in ESS competition and the two wins are now his two career wins with the 35 year old organization.


“I am not sure what it is about this place, but ever since I got hurt here I guess we are getting wins as redemption,” Zimbardi went on, “I like many tracks but here has definitely been good to me lately. It’s a good start for the whole team, I just can’t thank them enough.”

Bobby Breen was a surprise entrant for the ESS opener, now residing in Fort Worth, Texas, he came home for the weekend and decided to dust off the sprint car too. “Yea, it was a weekend where I came back and just happened to be a race also so we brought the car out,” Breen laughing, “I still have fun driving and that’s why we can, to have some fun.”

Breen didn’t look like he had any rust what so ever, starting in third he kept the leaders in sight all race and with a handful of laps left, he got himself into second and hoping for a shot at the win. “I saw Jared and was gaining some on him but then he just had one good lap in turns three and four and got some cars between him and myself,” Breen said on the closing laps. “Hey, to come out here and run second, I am happy.”

After this weekend was over, Breen will be taking his car to Texas, “There’s some tracks down there, might as well race,” he quipped.

Jordan Thomas is the teenage son of former ESS standout Jeff Thomas, and when the checkered flag fell his #79 was in third position after starting in 12th. His best career ESS finish and as his father was quick to point out his best career 360 finish. Needless to say he was all smiles.

“It’s pretty cool to start the season off with a third place finish,” the younger Thomas said. “On the redraw of course I picked the worst number (12) even though the track was rough I was trying to stay comfortable out there. It was tough, I am tired but we had a good race.”

ESS/OUTLAW NOTES – A nice field of 35 sprints filled the pits at the Yates County Oval…Heavy rain two days prior coupled with new clay saw the track crews working overtime to provide the best surface possible….Several sprints did get on their wings during the night but with no injuries… The Lucas Oil ESS Tour now moves to the Fulton Speedway on Friday, Apr. 29th to kick off the High Bank Holdup Weekend with a $2,000 to win event.