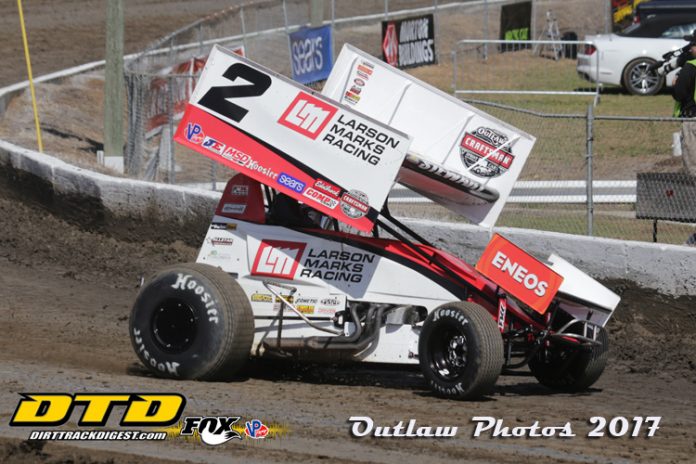 SAUK RAPIDS, MN – Tickets are now on sale as Marthaler Chevrolet of Glenwood presents the World of Outlaws Craftsman Sprint Car Series at Granite City Speedway in Sauk Rapids, Minnesota on Tuesday, June 20. Tickets can be purchased online at slspromotions.ticketforce.com or by calling SLS Promotions at 815-344-2023.

Shane Stewart was victorious at Granite City Speedway last year, taking the lead from Kerry Madsen on lap-11, after starting second. Stewart held off Kasey Kahne Racing’s Brad Sweet in the late going to pick up his first win in the state of Minnesota.

In 2015, Donny Schatz, the eight-time and defending series champion won a thrilling race at Granite City Speedway over Shane Stewart and Danny Lasoski, who finished third. Lasoski, the 2001 World of Outlaws champion, led the first 26 laps from the pole, before Stewart got by for the top spot. Stewart led a single lap, and then Schatz charged by to take command for the final three circuits to score the inaugural World of Outlaws Craftsman Sprint Car Series win at Granite City Speedway aboard his No. 15 machine for Tony Stewart Racing.

Schatz leads the series this season with six wins through April 15 as he chases his ninth series championship. David Gravel is currently second in points on the strength of four wins and is tied with Schatz for the most top-five and top-10 finishes thus far in 2017.

Battling Schatz, Stewart and Gravel in 2017 is a talented group of full-time competitors, including 2013 series champion Daryn Pittman, his teammate Brad Sweet, who is third in points and has two wins thus far this season, Jason Johnson, who won the Knoxville Nationals last year who has two wins already this year. Joey Saldana is driving for a team co-owned by NASCAR driver Ricky Stenhouse Jr., this year, while longtime fan favorite Jason Sides, veteran drivers Paul McMahan and Kraig Kinser, as well as defending Kevin Gobrecht Rookie of the Year Award winner Greg Wilson are all back on the road again this season.


Young drivers Logan Schuchart, Jacob Allen and Clyde Knipp are the next generation of World of Outlaws Sprint Car Series competitors. Schuchart recently picked up a win in California. A pair of drivers are contending for the Kevin Gobrecht Rookie of the Year Award this year, led by Sheldon Haudenschild from Ohio, along with Brent Marks from Pennsylvania.

Tickets for Marthaler Chevrolet presents the World of Outlaws Craftsman Sprint Car Series at Granite City Speedway in Sauk Rapids, Minn., on Tuesday, June 20 can be purchased online at slspromotions.ticketforce.com or by phone at 815-344-2023.