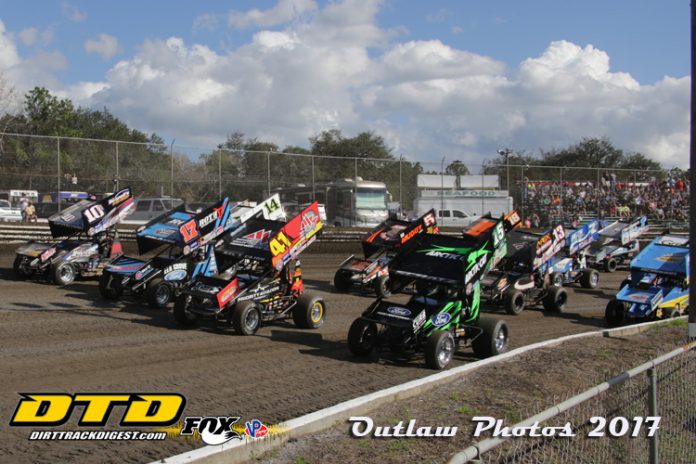 Three-time series champion Sammy Swindell picked up the win in 2012 at Sedalia. The Hall of Famer took the lead from Cody Darrah on the 15th lap of the 25-lap contest, en route to his third career win at the track and first since 1985.

Donny Schatz, the eight-time and defending series champion, leads all active drivers with a pair of wins at Missouri State Fair Speedway. He was victorious for the first time at Sedalia in 2003 and returned to victory lane at the track in 2008. Schatz has made 18 starts at the half-mile, the most of any active full-time World of Outlaws Craftsman Sprint Car Series driver and he also has the most top-10 finishes at the venue of current drivers, with 13.

Jason Sides and Paul McMahan also have won World of Outlaws Craftsman Sprint Car Series races at the half-mile. The win for McMahan was his first-career triumph with the series, back in 2001. The veteran driver has seven top-10 finishes at Sedalia in 11 starts. Sides was victorious at Sedalia in 2010.

Joey Saldana has been one of the most consistent drivers over the years at Missouri State Fair Speedway, earning 11 top-10 finishes in 12 starts, with three of those being top-five showings, as he chases his first win at the track. Daryn Pittman also has shown great consistency at Sedalia, with eight top-10 finishes in 13 starts. Kraig Kinser has raced 11 times with the Outlaws at the half-mile and has five top-10 finishes.


Shane Stewart and Jason Johnson are each past winners at Missouri State Fair Speedway in 360-sprint car competition with the American Sprint Car Series (ASCS). Johnson won at the track in 2000, while Stewart was victorious in 2003.

David Gravel and Brad Sweet have each made just one start in their career at Missouri State Fair Speedway, while Logan Schuchart, Greg Wilson, Jacob Allen, Sheldon Haudenschild and Brent Marks will each be making their first visit to the track.

The Sedalia Show-Me State Showdown will be a home race for Clyde Knipp, who hails from California, Missouri, which is less than 40 miles from Sedalia.

Some of the “invaders” expected include Brian Brown, who won with the World of Outlaws Craftsman Sprint Car Series earlier this season in Arizona. Also expected are Brady Bacon, the defending USAC National Sprint Car Series champion and RJ Johnson, who is originally from Florida and now calls Knoxville, Iowa home.

Tickets for the Sedalia Show-Me State Showdown, featuring the World of Outlaws Craftsman Sprint Car Series at Missouri State Fair Speedway in Sedalia on Friday, May 5, can be purchased online at https://slspromotions.ticketforce.com or by calling SLS Promotions at 815-344-2023 and at the track on race day.